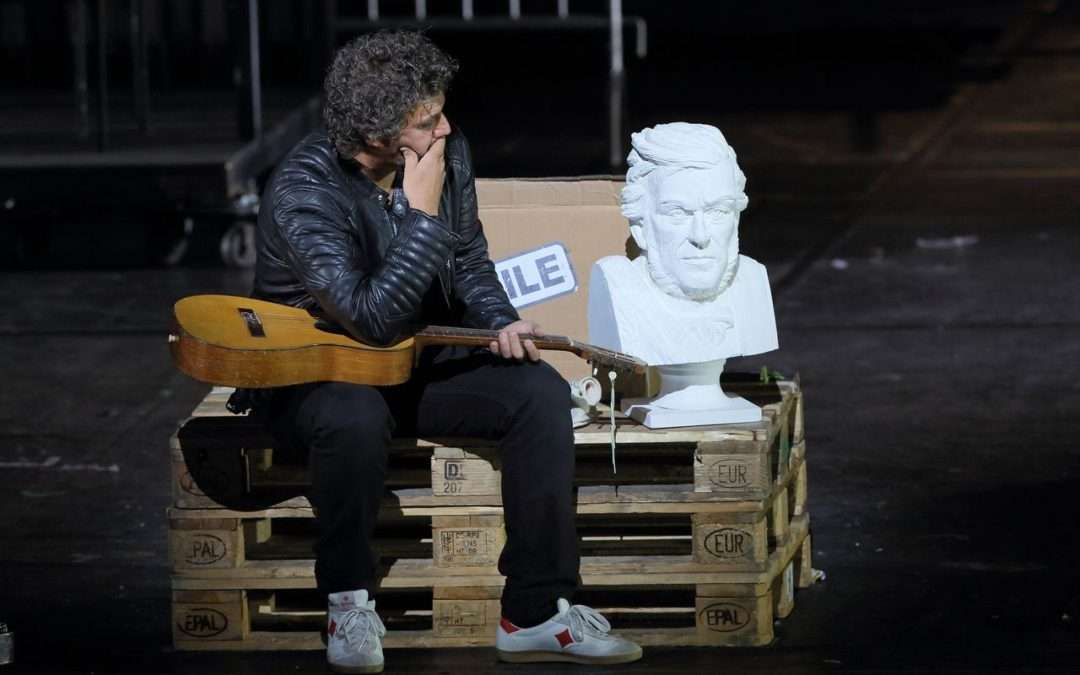 The last night of the Munich Opera Festival, always July 31st, is the culmination of a month of intense music-making at the Bavarian State Opera. Often the final performance is relayed to a big screen in the square outside the theatre. This time, a week after a shooting incident left the city in shock, the screening was cancelled; a sensitive decision, since the close of this Meistersingerproduction by David Bösch features Beckmesser threatening the crowd with a gun before turning it on himself. Unveiled to no little controversy in the spring, the staging is a dark Meistersinger for dark times.

It is also a tour de force, rich with detail and perceptiveness, and musically it is out of this world. This house has a Meistersingertradition like no other; premiered here 1868, the work has rarely been out of its repertoire since. Kirill Petrenko conducted a performance of sprightly tempi, generous elan, transparent textures and refulgent phrasing, but the orchestra itself owns this music to an exceptional degree. And that’s even before Jonas Kaufmann, Munich’s local hero, takes the stage.

We’re implicitly in Nuremberg, 1968: revolutionary forces simmer beneath the surface, the older population silently nurses fearful memories and the city, blasted to pieces in the war, has transformed into hastily built concrete tenement blocks (effective designs by Patrick Bannwart). It’s an inspired choice of moment: the centenary of the opera, a time at which revolutionary pop singers were overturning tradition (Meistersinger as Birth of the Beatles? Why not?) and when “Wahn” could break out with unimaginable consequences at any time. The riot of Act 2 turns nasty and is cleared by the police as nightwatchman, drawing a crucifix with a baton – yet he doesn’t prevent the savaging of Beckmesser by masked marauders. The Meistersingers, in Act 1 clinging to their ritual perhaps as a last vestige of old-world security, make their roll call, then stare together into the void.

Celebrations and presentations are homespun and desperately naff. Mechanical things are clunky and malfunction easily, from David’s moped light to the cherry-picker from which Beckmesser sings his hapless serenade. And Sachs’s name in lights upon the caravan where he makes his shoes loses its Ss and simply reads “ach” for the start of Act 3. Which is dark. Very dark. The radiant morning music unfurls in the dead of night.

Into this turbulent clash of past and future strolls another manifestation of the sixties: a hippy aristocratic dropout with a guitar, determined to get the girl. There’s no Meisterdom for this Walther: he rejects the idea even after Sachs’s admonishment and disappears into the glitter with Eva.

But if Kaufmann is a completely believable Walther and rises with honey-toned nonchalance to the role’s notorious demands, he is matched throughout by a tremendous cast, full of convincing vignettes: Christoff Fischesser as the moneyed Pogner in a white suit, the radiant and vivacious Eva of Sara Jakubiak, and the dignified Fritz Kothner of Eike Wilm Schulte all had their show-stealing moments, the latter left alone at the close of Act 1 caressing a fragment of the bust that Walther has just smashed: it is, of course, Wagner.

The relationship of Magdalene and David is touchingly developed and fabulously sung by Okka von der Damerau and Benjamin Bruns. Martin Gantner cuts a swathe through the show as a Beckmesser whose roller-coaster progress takes him from tea-swilling critic virtually fresh out of Radio 3 to a desperado in a yellow glitter suit driven to take his own life… and is a true master singer to boot.

But it is Wolfgang Koch as Hans Sachs who encapsulates the mingling of bitterness and hope, of a destroyed past and a compromised present, gone to the dogs yet with dignity intact, trying to extrapolate art from what remains: he is a rock-strong presence. As for the magnificent chorus, “Wach’ auf!” was so long and loud that it was surprising to find the theatre still on terra firma afterwards. The eight-year old lad in front of me, who sat entranced and air-conducting through the opera’s entire span, went nearly frantic with joy.