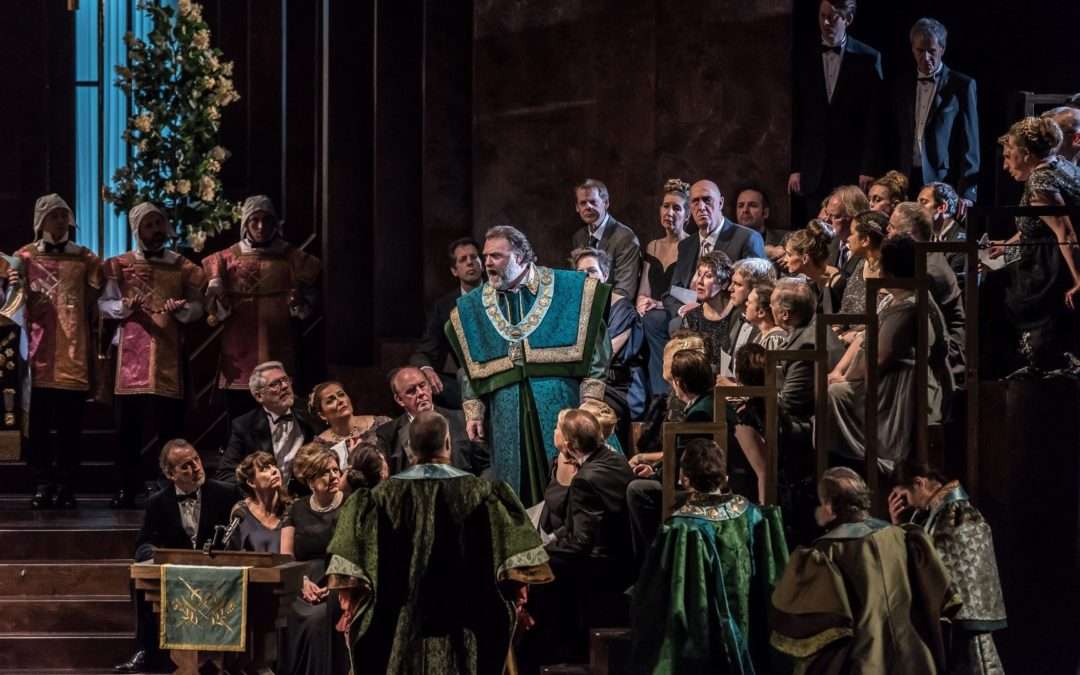 It’s all pomp and circumstance as Kasper Holten’s new production of Meistersinger takes us through the portals of a posh gentlemen’s music club. The Danish director is stepping down as head of opera at the Royal Opera House, and this, his farewell production, has been the subject of much speculation. A lot of it is true.

As is often the case with Holten’s work, the staging is highly stylised: suspension of disbelief is called for as the setting becomes a Pall Mall-ish microcosm of Nuremberg. The ingenious set design by Mia Stensgaard suggests wooden panelling, stairs and Gothic architecture all at once – though everyone appears to live there as well, rendering the Act II shenanigans of serenade and cobbling a trifle odd in context. For Act III, the set revolves – and continues revolving at snail’s pace – to reveal Sachs in what looks like a storeroom, where the extravagant Mastersinger robes are kept. The club’s theatrical nature is made plain: what remains when it is unmasked?

Beckmesser shows us. Stripped of his finery after his disgrace, he is left curled up in his vest, reduced to nothing without the gear that dignified him – green silk gown and bizarre head-dress like a stack of pizza delivery boxes, all of it deliberately ridiculous. Sachs’s extolling of great German art is the other unmasking, though admittedly we might only know this from Eva’s reaction. Though first infuriated when Walther turns down membership of the Mastersinger Club, she listens to Sachs, then sees her acquiescent beloved being turned into Beckmesser, given his cast-off gown. As the pizza-boxes are pressed upon his head, she has some thinking to do…

Does it work? Sometimes. On a practical level, there’s a lot of stage traffic, especially in Act II – staff traipsing in and out to set up tables with clinking cutlery while David is singing. Niche jokes abound – the pretentiousness of a spinet as preferred accompanying instrument; the desultory procession in the last act tastelessly mimicking poverty versus wealth; the lampooning of this environment is not exactly subtle. A bigger problem is the balance of realism and symbolism has not really settled, so the fabric of storytelling seems peppered with inconsistencies and perhaps that is why some of the characterisation can feel a bit one-dimensional.

The music, though, is an absolute joy. The orchestra and chorus sound a million dollars. Tony Pappano picks sprightly tempi and fills the score with irresistible élan, the string tone intense and soaring, the rhythms springy, the technicolour orchestration beautifully blended. Gwyn Hughes Jones brings to Walther a high timbre with real “ping” and a powerful, Italianate edge that cuts naturally through the textures. Rachel Willis-Sørensen is a rich-toned Eva whose opening of the Quintet is a highlight even in an evening of treats. Hannah Hipp is a supple, lively Magdalena – the club manager, in case you wondered. As Sachs’s apprentice, David, Allan Clayton proves that Mozartian finesse can serve this role to perfection. Stephen Milling is a dark-voiced Pogner and Sebastian Holecek a proud Fritz Kothner.

At the centre stands Bryn Terfel’s magisterial and great-hearted Hans Sachs. It appears this Sachs lives for art, haunted only a little by his lost past, but thoroughly fed up with shoemaking. With his fulsome, direct tone and ever-charismatic presence, Terfel inhabits the role as if it were written for him. He has a formidable nemesis in Johannes Martin Kränzle’s Beckmesser, who offers splendidly nuanced singing and a subtle, well-developed character – fussy, precious, insecure. He also grabs our sympathy upon losing his nerve in the contest (where the surtitler seems to have had some fun with the translation).

Production and singing alike reach their finest in the last act, in which everyone shows their true colours. The pomp is revealed as guff, but the art it celebrates is real. There hangs the enduring truth of Meistersinger. Art – German or otherwise – is still our moral compass. It shows us what is authentic and what is not. If we lose that, we lose our hold on reality. If that is what Holten admonishes us to remember, as he departs for Denmark, we could do worse than listen.