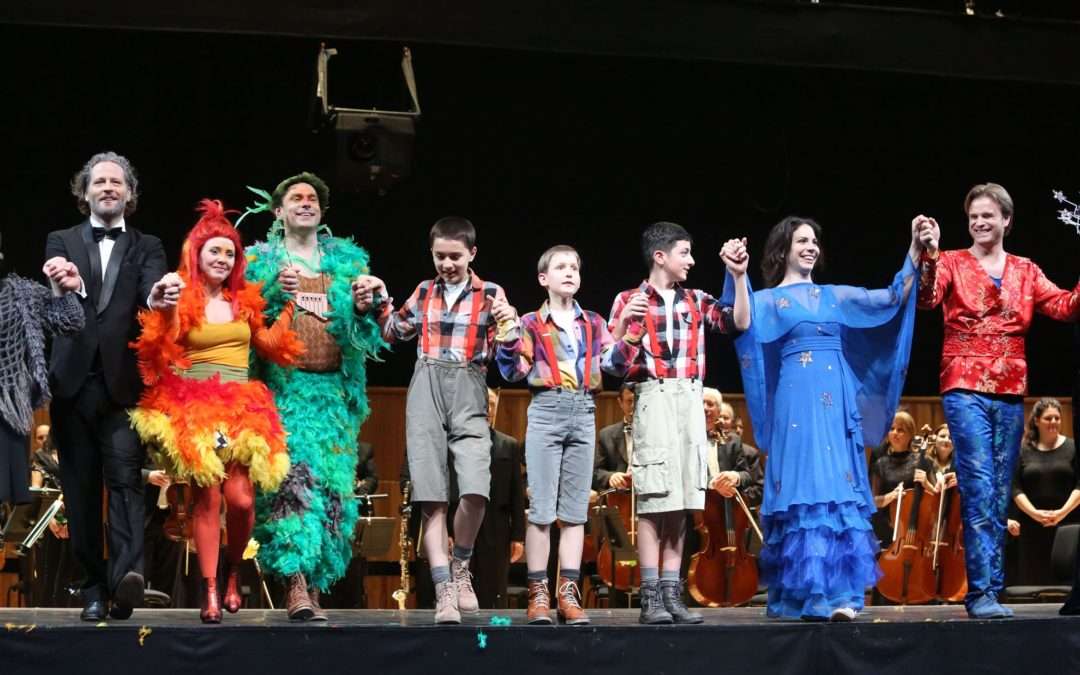 A “staged concert”, according to conductor Iván Fischer, is “a theatrical performance designed for a concert hall”, its goal “organic unity” between music and theatre. That’s what opera performances are anyway, aren’t they? Oh, wait…

Mozart’s Magic Flute is a sublime work so riven with problems that few performances solve the lot. Fischer directed, as well as conducting – and if even he cannot provide answers to everything, he succeeded in producing some great theatrical coups while offering a musical interpretation as close to ideal as any I have heard. A few days after staging a musical demonstration in Budapest to protest a swingeing cut to its municipal budget, the Budapest Festival Orchestra was in magnificent form.

For the occasion, the Royal Festival Hall sprouted a proscenium arch and orchestra pit, a screen providing backdrop projections and some splendid shadowplay. The Flute mingles fairy-tale with the quest for enlightenment, but the first element is often lost, together with its innocence. Fischer’s projections, though, lead us into a child’s storybook, with big, colourful drawings, bright costumes (green feathers for Papageno, blue and pink hair for the Three Ladies), big-text translations, pages that turn and plenty of jokes. When Sarastro’s monks appear, the book is transformed: silhouettes behind the screen, vastly expanded in shadow, are a simple effect yet tremendously striking, especially when Sarastro’s aria ‘In diesen heil’gen hallen’ presents a giant shadow of his head.

With singing in German and dialogue in English, the principal characters all have doubles, their spoken selves played by British actors. This is perhaps a thin end of the wedge, but it had its moments. Actor Papageno, asleep, dreamed his double into ‘Ein Mädchen oder Weibchen’; but then singer Papageno tried vainly to wake actor Papageno before finding himself obliged to converse with his broad-Yorkshire Papagena in a sort of Deutschglisch.

Musically there were glories from start to finish. Fischer’s unerring feel for tempo gave spirit and breath simultaneously, plus a wealth of detail in articulation that never overwhelmed the flow. A chamber-like exchange between orchestral players and singers complemented a sinuous clarity of texture far from exaggerated period mannerisms.

The cast included some exceptionally fine voices. As Pamina, Hanna-Elisabeth Müller proved a refulgent soprano, at her finest when let off the leash and allowed to soar. Bernard Richter’s winsome Tamino possessed a luminous, pure and forensically accurate tenor, and as Papageno Hanno Müller-Brachmann was all warmth, pathos and down-to-earth “child of nature”. Mandy Fredrich’s Queen of the Night offered her virtuoso arias with aplomb and Krisztián Cser’s Sarastro possessed a shadowy yet powerful darkness of timbre. The chorus – the A la cARTe choir, swelled for the finale by musicians from the BFO itself (yes, they sing too) – was small, but fine. Three excellent young lads from the Hungarian State Opera Children’s Chorus did a splendid job with their trios.

Tamino went into the fire and water trials in superhero blue, armed not with a gun but with his flute. And that was the message: this opera is about the power of music to protect and transform our enlightened humanity: by restoring its innocence and idealism Fischer does us all a favour. As for the “staged concert”: more than a concert performance, less than a full staging, looking homespun yet requiring slick delivery and sleight of hand, not least from the orchestra (which made its way from pit to behind the stage for the final chorus), the concept was a creation in its own right: a new and rather lovable way of experiencing an operatic masterwork.