Difficult Times for Critics – From the First! 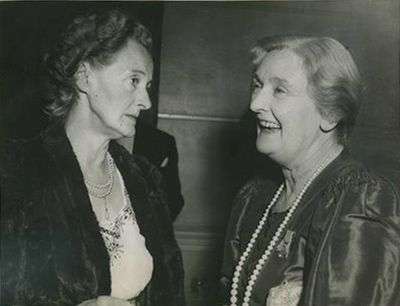 Dame Sybil Thorndyke at a dinner held to marek the golden jubilee of S R Littlewood at the Savoy on 18 September 1947.

“Criticism is passing, as many of us know, through a difficult phase. Its field is becoming more and more restricted. There are fewer papers than there were before the war and less space even in these. ” Yes a statement most would agree with these days – but this was written in 1923 in the first issue of The Critics’ Circular – a publication with a long if broken history! The words were written by the President of the Circle .S.L.Littlewood, who was the first Secretary of the Circle when it was formed in 1913.

The aims of the Circle were “to promote the professional interests of dramatic and musical critics, and to facilitate social intercourse and the exchange of views on artistic matters.” (The original Circle membership consisted of drama and music critics, with film, dance and most recently visual arts joining the Circle subsequently).

Above everything, I would emphasise that we are a body, not of nondescript frequenters of the theatre, the opera-house and concert hall, but trained journalists. We are members of a high and honourable calling, which has undoubtedly, taken over a great deal of the educational and disputative work originally done by the stage itself. Our attitude is one of deep interest in current art, and of sympathetic and frequently enthusiastic appreciation of its creators, and executants. But we are not dependent on them. We have an art of our own, capable of being otherwise applied. We are, as critics, comparable to the ambassadors of a friendly Power, in which capacity we are responsible to the laws of our own profession and to those alone.

The article finishes with a look forward – “Meanwhile it means much for the future that Oxford,Cambridge, London and other Universities are definitely preparing some of their most promising men to become critics. The younger generation are, indeed, not merely, ‘knocking at the door’ In several instances they have already opened it without any such preliminary – and good luck to them.”