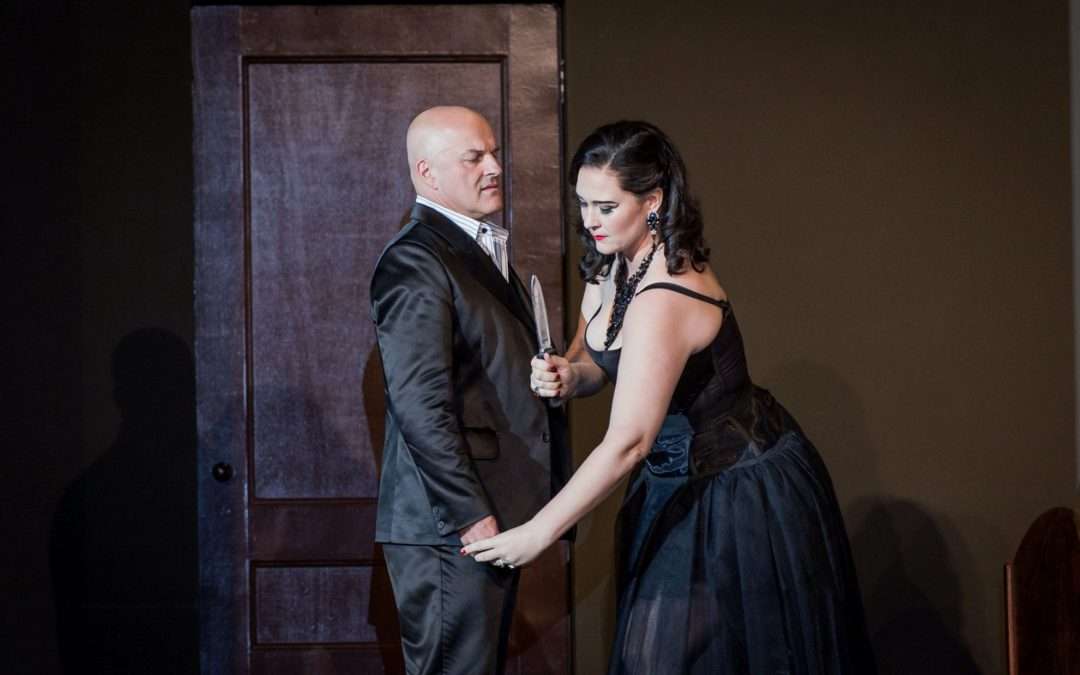 Two Mozart/da Ponte shows running at the same time in London give a picture of what we stand to lose if ENO goes down the pan. At Covent Garden, a tricksy, self-regarding Così, packed to the rafters, and at ENO an engaged and thought-out Don Giovanni directed by Richard Jones, not nearly as full as it should have been on its 3rd performance. Both are musically impressive, the Così undercast for a house that prides itself on vocal quality, but both conducted with great love and imagination by two very individual conductors.

This Giovanni is an entertaining show, and if you’re as frivolous as me the final joke will send you home happy. But Jones’s chosen aesthetic – a David Lynch-style noir job with black satin for nobs and Scandi-homespun for plebs – imprisons Mozart’s ambiguities in an only moderately interesting, self-consciously filmic study of conflicting narratives and moral murk. You get the uneasy feeling that the opera has been tailored to its design (Paul Steinberg, Nicky Gillibrand, Mimi Jordan Sherrin) rather than the other way round: Jones in thrall to his beloved atmosphere of queasy black comedy tipping over into something darker.

He is not a director to “go against the music” (in any case a loaded and subjective phrase, much favoured by the doctrinaire and closed-minded), but there are some odd decisions here, whole stretches apparently willing us to stop listening: starting with a dumbshow that completely nullifies the overture, as Giovanni proves irresistible to a succession of women (and a chap) walking the corridors of a seamy hotel. But the point is made, and reinforced later on when Giovanni bellows out his credo in the least equivocal bit of action in the whole show: “Women are heavenly! Wine is salvation!” This, of course, is the secret of his success: for an admittedly rather short time, women are worshipped, unquestioned goddesses. Who could resist that?

The version used is very much “an edition”: for example, Ottavio’s ‘Il mio tesoro’ segues into Elvira’s ‘In quali eccessi’ for dramatic effect in a way Mozart would never have imagined (one being written for Prague, the other Vienna), and there are many elisions of recit. The question is, in service of what? Jones creates atmosphere brilliantly from the opening split-screen scene of Giovanni and Anna in consensual sexual role-play with hoods and knives, while her old dad is entertained by a hooker next door. It’s all slo-mo, cheap lighting, stylised. But while this is not particularly illuminating as it concerns the Commendatore, the Anna story is followed through properly, and to good effect: the ‘Non mi dir’ scene, much later, conducted by phone with Ottavio, is brilliantly hesitant and conflicted – and thrown deeply into question by Giovanni’s materialising in her room half way through.

So a story is cogently told, and far from pointless. There is intense physical action, much attention on dramatic delivery of recit, and a great concentration of stage energy. Jones can’t resolve the longueurs of Act 2, and energy flags badly here. Christopher Purves’s Giovanni might have been created to illustrate Donald Trump’s comments on how the powerful can get away with anything, though Giovanni’s “failure to apologise” to the statue would appear to have a bit more metaphysical substance than the other Don’s habitual weaselling. Giovanni doesn’t go out of his way to be seductive – seeming more to hypnotise his victims – though his voice goes nicely husky with desire in duet with Zerlina and in the serenade. But this guy is no moral or existential rebel as Mozart’s creation (arguably) is: just someone who reckons your rules don’t apply to him. Obsessive, autistic, a train-spotter among libertines, this Giovanni’s needs have very little to do with pleasure.

The entourage is brought vividly to life. Clive Bayley is a sort of failed-comic Leporello, the complete full-guy, singing with great clarity and self-deflating humour. Allan Clayton’s Ottavio is almost aggressively ineffectual, but gorgeously sung (he gets both arias) – ‘Il mio tesoro’ wonderfully fleet and light. Mary Bevan pinpoints Zerlina’s conflicts in a subtle bit of acting, and sings with artistry if less dramatic effect than others. Caitlin Lynch is the tormented Anna, her motivation more obviously based in possessiveness and jealousy than usual, and strongly sung. The mesmerising centre of attention is Christine Rice’s Elvira, a hopeless, frazzled, complaining mess, but sung and played with focused fury – her appalled horror at her unwanted “love that will not die” is very memorable, and the accompagnato, very spaciously and lovingly conducted, is the most human thing in the whole show. At Giovanni’s last supper she is Mary Magdalene – and Jones indulges the profane-religious angle here, with Giovanni’s blasphemous Eucharist of wine and female flesh very much to the fore.

Mark Wigglesworth conducted beautifully: it strikes me that – like one of those England cricketers unwisely promoted to the captaincy, who only recovers form on a return to the ranks – he’s a much better conductor than when he was briefly in charge here. There’s a lovely soft, pliant string tone, fabulous woodwind articulation, nothing conventional or automatic – a concentration on expressive beauty, in fact, that ironically counterpoints the notable lack of loveliness on stage.

Even if Jones’s staging is far from entirely satisfying, the ROH’s Così looks vapid by comparison. There exist competitions where clever-dick young directors bombard old-lag juries with sycophantic collections of their own worn-out staging tics. Jan Philipp Gloger’s production ticked every box on my meta-theatre bingo-sheet within about ten minutes: the show within a show (the overture featuring a curtain-call after a performance of Così fan tutte), the false proscenia, the stage-as-auditorium, the characters willing dupes in a set-up staged by Alfonso, the house lights up, singers in the audience, singers shining spotlights at the audience…. all clever and knowing, doing its damnedest to drown Mozart in show-offy inconsequence.

There is a point of sorts, albeit expressed via a kind of ADHD compendium of all received ideas about Così: the self-deceptions of love, the acting we can’t help doing, the way we live through tropes learned from books, movies, theatre. Gloger’s manic way of conveying this is through a new set-up for each scene: the salon of the girls’ first duet turning instantly into a ’40s film-set station for the lads’ departure, all golden light and nostalgic trench-coated couples; a bar with a bevy of Madonna-dancer types in suits and fashionable hats (our boys, now disguised, emerging from among them); a mock-Eden for the poison scene. And so on; done with wit and energy but gimcrack pseudo-theatre.

Still, do what you like with Così – and I’m fine with it as sunny fantasy-comedy or anguished growing-up drama – you can’t stop Mozart breaking your heart. The music paints in the most perfect light both our angelic idealism and our troublemaking hearts (and loins); tragedy comes where the facets of humanity collide, at such cost to ourselves and our beloveds.

The singers work well as an ensemble, though only fitfully escaping Gloger’s strait-jacket vocab of tired Valley-girl/Sopranosgesturing. Nor are they really Covent Garden calibre, though perhaps en route. Best are Daniel Behle’s lovely lyrical Ferrando and Johannes Martin Kranzle’s expert Alfonso; Angela Brower and Alessio Arduini an attractive Despina and Guglielmo, Corrine Winters very hard-working as Fiordiligi but challenged by its range, Sabina Puértolas doing everything required of her (alas, it is all deeply irritating) as Despina.

Semyon Bychkov produced a partly marvellous, old-style account, punctuated with the odd stretch of metronomic sleep-walking. I don’t think I’ve ever heard such a variety of detail in Così: each aria, each accompagnato, very specifically analysed in terms of weight, tempo, timbre. This could have resulted in something bitty and non-organic, but Bychkov’s sheer artistry held it together – except in parts (notably the poison scene at the end of Act 1) where inspiration vanished and (along with a particularly painful and forced bit of staging) everyone simply went through the motions.