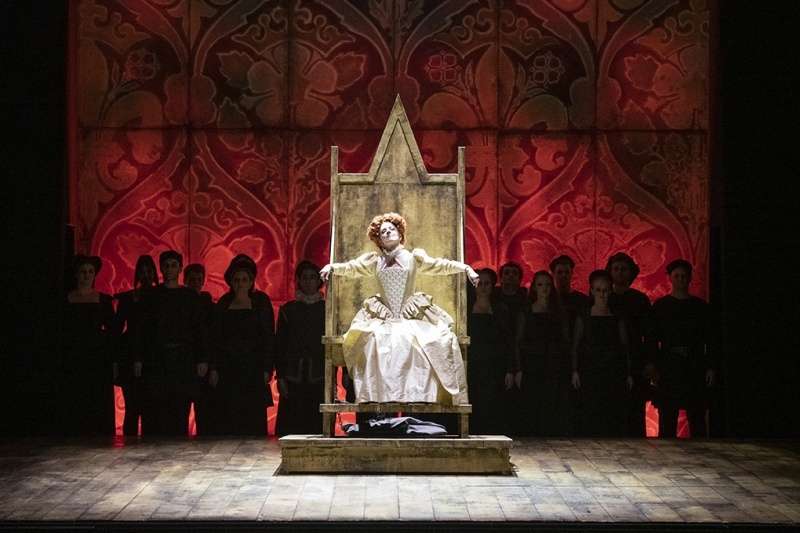 As with nearly all innovations in 19th-century opera, it was Gioachino Rossini who discovered the obvious truth that Queen Elizabeth I was a born coloratura; handy for Gaetano Donizetti, who later put the queen at the heart of two further operas. In 1815 Rossini made Elizabeth’s name as a star of the stage with this remarkable piece. He was 23, and had just begun his Neapolitan career (where he would write 10 operas for the San Carlo house over the next few years). No greenhorn – he had already produced over a dozen operas including L’italiana in Algeri, Tancredi and Il turco in Italia (The Barber of Seville would come the next year) – in Elisabetta, Regina d’Inghilterra he cannibalised much of his earlier music to hit his new audience in the solar plexus.

That included the overture from Aureliano in Palmira, written for Milan in 1813 – better known to us as the one from the Barber, which is slightly alarming when you’re sitting there expecting a historical melodrama. But despite its familiarity there’s nothing farcical about this ebullient piece, and played with perhaps a little more restraint than usual by conductor John Andrews, darker, even portentous colours emerge (Rossini reuses the overture’s climax for a stunning proto-Verdian finale later on).

James Conway produces one of his usual clear stagings for the dramatic story. Elizabeth loves Leicester, but he’s just come back from a previously unrecorded Scottish war loaded down with much booty – including a wife, Matilde. Worse, she is not the pretty bumpkin he first thought, but one of many children produced by the round-heeled Mary, Queen of Scots, Elizabeth’s hated cousin, catholic, rival etc. You can see how this will  go down, and when oleaginous Norfolk duly spills the beans, the queen flies into a vengeful rage. These four are the only notable characters; a multi-purpose chorus shuffles around, sometimes with purpose, on an empty stage equipped simply with a throne and some nice rose and fleur-de-lys wallpaper.

This isn’t, perhaps, the most immediately accessible of forms: classical opera seria with a Romantic makeover, somewhat stately, the young composer experimenting with the musical forms that dictate the drama – the fixed but malleable multi-section scene (also invented by him) that can be mashed about like plasticene to suit an amazing range of dramatic events. Stretches of recitative where the characters mull over their turmoil explode into cathartic storms of florid singing, and there are tense scenes of fencing and probing where they look for weak points in each other’s defences.

Recit usually feels merely like stuff that needs to be got through, but here – often with rather sophisticated instrumental interjections – it is the heart of the thing, and a conundrum for the conductor. It has to be slow enough for genuine emotions and conflict to develop, yet with enough pace not to bore everyone to death. Andrews handles it brilliantly, with real meaning in the accompaniments and pliant rhythms, and the singers do their thinking on the hoof. And it was good to see Mary Plazas again (singing Elizabeth), and remember what a great singing actress she is, with a knack for the stillness that speaks, and a non-histrionic style gravid with suppressed, roiling emotions. John-Colyn Gyeantey (Norfolk) is another singer who can make words really count – and in any case this Norfolk is a pretty satisfactory piece of work, insinuating, manipulative, vain, over-confident, and (in traditional bel canto form) an emotional maelstrom.

In the end, though – and however vital the recits are – the audience is here for the arias and voices, and I can’t immediately recall a better evening of coloratura singing in London. If there was some holding-back to begin with – it’s a longish evening, and there’s a big tour to come – it wasn’t long before the quartet put their feet full on the gas, to thrilling effect. Unaccompanied ensembles can the worst thing in opera – contests in sine-wave vibrato, competitive crescendos and wayward tuning – but here they were integrated, collaborative, pregnant with mixed motives and circling watchfulness. Duets likewise: some gripping standoffs where much more was being said than it seemed: as Norfolk turns Elizabeth against Leicester, or assures Leicester of his eternal love, or Elizabeth tries to reconcile love, gratitude and jealous fury against Leicester. In these early days Rossini often experiments with orchestral moments and transitions that remind you of Mozart and Beethoven, as well as busting out into driven, neurotic outbursts that foreshadow Verdi, and this constant impetus and musical drama, and the orchestral richness, puts in high relief the central sections of these duet scenes, where time stands still as the protagonists meditate with great pent-up feeling, as the music circles with momentary calm before stampeding onward into the extravagant stretta.

And each character gets their solo showcase, too, of course – usually more than one. These are the fireworks that brought the house down in Naples, with Rossini’s future wife Isabella Colbran, and the two first tenors the place boasted. Preposterous for ETO to dream of getting anywhere near that level, of course – and yet for this smaller venue Plazas, Gyeantey and Luciano Botelho as Leicester make a stunning trio (Matilde is much less prominent, but Lucy Hall loses nothing in comparison; actually in richness of tone she outstrips Plazas). Some of this stuff is borderline impossible to sing, yet nearly everything is tossed off with musicianship, accuracy, proper even tone, and real guts.

Eventually things resolve in high drama as Elizabeth is saved from assassination by Matilde and her brother, pardons everyone, forswears love and determines to wed herself to England; her peroration is a hell of a moment. And yet it’s the bit just before that leaves the strongest impression: a kind of dawning of grace, the moment of forgiveness, self-mastery and atonement, where she sings ‘Bell’alme generose’ – generous souls – in half-voice over a chuggy broken-chord accompaniment. As Rossini’s forms encompass and direct the drama throughout, here the notes themselves transform the soul: and this is what opera is for.