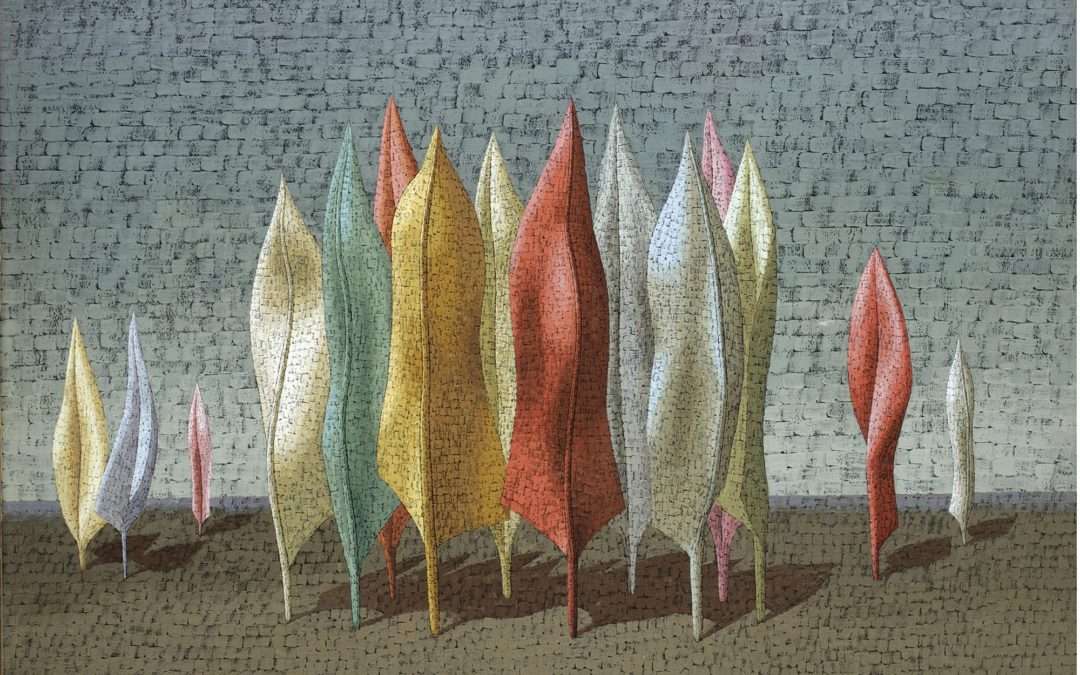 Among myriad images confronting the visitor to galleries, there are some in which the artist’s hand is immediately unmistakeable.  Include in this select band John Armstrong, creator of paintings uniquely cool, calm and enigmatic.  A fine selection of the best, now on show at Piano Nobile Gallery, offers an excellent introduction to the work of this serious and thoughtful artist.

Armstrong was born in 1893.  After periods at St Paul’s School, St John’s College in Oxford, St John’s Wood School of Art and First World War service in the Royal Field Artillery, he was relatively late in establishing himself an as easel artist.  Although he had a first solo exhibition at the prestigious Leicester Galleries in 1928, there were by this time diversions preoccupying him.  The 1920s and 1930s saw him busy as a designer.  He designed for Elsa Lanchester’s theatre club The Cave of Harmony; interiors for Lillian and Samuel Courtauld; sets for the Lyric Theatre, Hammersmith; scenery and costumes for Frederick Ashton’s ballet Façade; he produced paintings for Shell advertisements; and worked on eight films for Alexander Korda.

The year 1933 found Armstrong among that select company of artists and architects involved in the movement Unit One.  This propelled him to the forefront of British Modernism in the company of such as Edward Burra, Wells Coates, Henry Moore and Paul Nash.  Although not on the committee of The International Surrealist Exhibition in London in 1936, Armstrong – always more of a loner than a joiner – would continue to infuse some of his work with a surreal element.  This is evident, for example, in three of the works in the elegant Piano Nobile catalogue: notably Figure in Contemplation (1945); also Feathers Conclave (1946); Leaf Forms(1947).

Early in his life, Armstrong developed an interest in Greek mythology.  His First World War service in Salonika seems to have stimulated an enthusiasm for the painting and pottery of Greece.  Armstrong’s Artists Prefer Shell poster (1933) included a Greek vase decorated with horses, and he subsequently made a series of paintings of horses overtly based on the iconography of Greek art. Chaldean Vase and The Goddess (both circa 1937) at Piano Nobile hint at such an interest.

Armstrong’s work also reflected his awareness of world events.  He was an official war artist in the Second World War.  Before it, he had been troubled by Fascism in Italy and the Spanish Civil War, remained politically sympathetic to the Labour Party and during peace campaigned against nuclear weapons.  Symbolism always attracted him and in the early 1950s he evolved his own.  In the foreword to his exhibition at the Lefevre Gallery in 1951 he attempted to explain some of his. For example: umbrellas symbolised “the inadequate beliefs under which men attempt to shelter from the growing storm of despair”; the clown was “the image of frustration, fighting battles of nothing”; and “women and flowers express states of love”.  The Battle of Nothing (1949) and Storm(1950) are examples of such symbolism.

Armstrong died in 1973, working until Parkinson’s disease began taking its sad toll, depleting his energy.  Since his death, however, his star has steadily risen and this exhibition should do much to enhance his reputation.