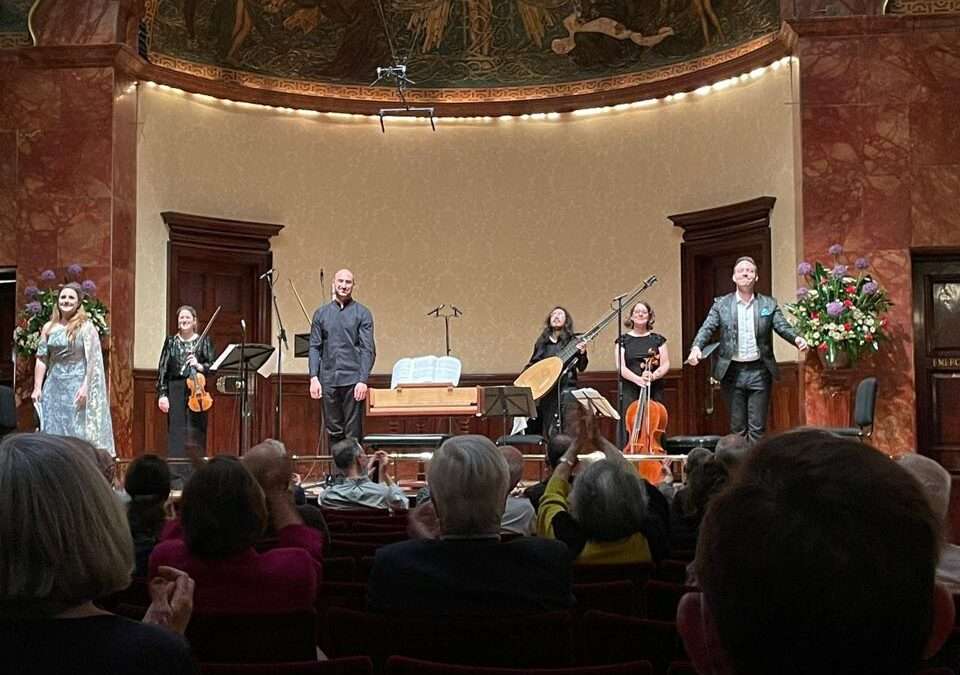 After a year without live music, the listener heads to the Wigmore Hall as the desert traveller to the oasis, and the Edinburgh-based Ensemble Marsyas’s evening of sparkling music from Handel’s Roman period did not disappoint.

There was so much to enjoy in their playing – a sense of joy, a rapport that makes them sound like one instrument, and above all a lovely glowing sound, like light shining through stained glass. These qualities were evident both in the opening Sinfonia, HWV 339, whose conventional harmonies could have sounded rather dull in other hands, and the Trio Sonata in G Minor, HWV 393, in which Sarah Sexton and Michael Gurevich’s violins alternately danced and mourned above a solid and flexible continuo line from lutenist Sergio Bucheli, Peter Whelan directing from the harpsichord and Sarah McMahon on cello.

In the versatile Whelan’s sonorous account of the bassoon sonata, Op 1 No. 7, the opening Larghetto was a loving duet with the cello in which the player coaxed a rich variety of tone colours from his notoriously difficult instrument and the cadences fell with cosmic inevitability, followed by a  delightful skipping Gavotte, with blink-and-you’ll-miss-them ornaments and a melting darkness in the minor passages.

The band were joined by countertenor Christopher Lowrey, and the Critics’ Circle’s 2019 award winner for Young Talent (Voice), soprano Louise Alder, in three of the composer’s secular Italian works, Tanti strali, Conservate, raddopiate, and the evening’s final showpiece Amarilli vezzosa. They blended beautifully, in spite of social distancing which sent them to opposite corners of the stage, but it was hard to believe that we were hearing Ms Alder at her best. Her voice is lovely, of course, full and silvery, and the passagework of Quel nocchiero che mira le sponde was perfectly controlled, but she sang Handel’s melodrama with inappropriate decorum, and quite often it was impossible to hear the words. She was overshadowed by the countertenor’s clear projection and dramatic flair as he underlined his snarling recitatives with appropriately expansive gestures and dripped sorrow in È vanità d’un cor. Honours were equal, however, in the final swinging compound time duet of  Si, si, lasciami ingrata, which loped along with sunny joy, and an electrifying encore of Tanti strali.

At the end Guy Rickards presented Ms Alder with her award. But, really, they all deserved one. Not so much Water Music, as a fountain of joy for a parched soul.