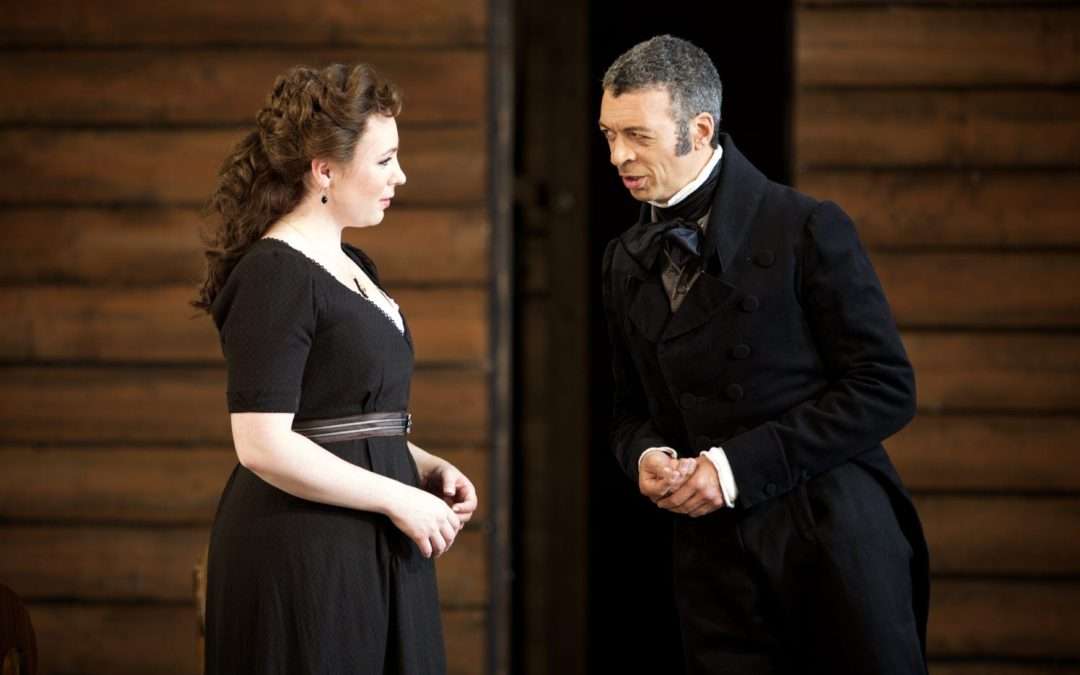 With its large orchestra and very large chorus, Eugene Onegin is Garsington Opera’s most ambitious production in its 28 seasons. Conducted by the company’s artistic director, Douglas Boyd, and directed by Michael Boyd (no relation), artistic director of the Royal Shakespeare Company from 2002-2012, and with large-scale sets by Tom Piper, also a veteran of the RSC (as well as the designer of the WWI-commemorating swathe of ceramic red poppies first seen at the Tower of London), this is Garsington Opera’s biggest adventure yet. It’s a triumph.

Conductor Boyd had a problem or two synching the singers and the band at first on opening night (the open space favours the voices over the instruments), but soon raised the initially chilly temperature of the wonderful Wormsley “temporary” opera house on the exquisite Getty estate. When they got the balance right, the orchestra’s sound was bright and colourful, and the chorus, with a substantial Russian bass sound, simply thrilling.

It was evident from the first that (Welsh-born) Natalya Romaniw’s Tatyana had the biggest voice on stage, and we soon heard that she was also capable of projecting this romance-obsessed teenager at an unwavering but vulnerable pianissimo. It seemed director Boyd had told her it was ok to stand in the centre of the thrust stage and deliver; but she actually displayed her acting ability by remaining so still and self-possessed that every gesture told – and tugged at the heart. In the last act she achieved the serene but hopeless dignity all Tatyanas aim for but seldom attain.

Vocally she was matched in power only by (Kiev-native) Oleksiy Palchykov’s Lensky; he looked good and moved well in this very physical production, but there was more drama than beauty in his poem aria. Lensky really needs a warmer lyric tenor.

In the title role Roderick Williams cut a fine figure, slim and costumed in Hamlet-inky black, showing trim legs that executed Liz Ranken’s noteworthy choreography with finesse. If anything, he played the hero, who finally loses his heart to the now-disdainful Tatyana, with a touch too much aristocratic reserve. The Welsh-Jamaican baritone bears a striking resemblance to portraits of Pushkin, and seemed perfectly at home with the Russian libretto. Congratulations, incidentally, to whoever wrote the surtitles, among the least obtrusive and most instructive I have ever seen.

Director Boyd has made dramatic capital of the two show-stoppers that bookend the tale and, indeed, Tatyana’s life-story: Monsieur Triquet’s name-day tribute to Tatyana (a lovely performance by Mark Wilde) and her husband Prince Gremin’s love-tribute (gorgeously delivered by Brindley Sherratt).

As for the “concept” of the production, there is nothing novel about an Onegin spooked by the ghost of Lensky, the man he has killed in a duel. But Boyd’s direction makes the last scenes extra poignant, focusing on the lurking erotic edge of their bromance, especially by clothing the slain Lensky in what I took to be a bridal gown. Although the piece is served very well by the traditional costumes of the cast, and by Piper’s sets – rustic façade for the Larins’ house, giant gilt frame enclosing what seem to be miles of reflecting Mylar for Gremin’s palace – I wish they had resisted the temptation to wrap the heroine in winding sheet-cum-bedsheets with a luridly placed red stain.

While the dramatic honours belong to Natalya Romaniw’s Tatyana, Jurgita Adamonytė’s Olga is a near-perfect airhead blonde to her sister’s more complicated brunette – she’s been superficially skimming too much Sterne, as Tatyana binges on Richardson. Louise Winter is a sympathetic, bustling Madame Larina; and Kathleen Wilkinson (who has sung the nanny’s role almost one hundred times) an outstanding, full-voiced Filippyevna – even if her job in this production consists mainly of peeling potatoes with a knife, and moving chairs on and off stage so that her employers and their guests have somewhere to sit in this very large set.

Full marks to Garsington Opera’s education department for the clever idea of giving an extra performance of Eugene Onegin in which all the principal roles will be sung by the understudies, for an audience of schoolchildren who will be seeing their first opera. Moreover, there will be free screenings of the production in rural coastal areas including Skegness, Ramsgate, Burnham-on-sea, and Grimsby. (See www.operaforall.org)

Wearing another hat – as the restaurant critic I was for many years – it gives me pleasure (on the basis of dinner on the first night) to say that the Wormsley restaurant, operated by Michelin-starred Oxfordshire chef Michael North, is superb – the best catering arrangement, including food, wine list and service, in any of Garsington Opera’s incarnations or, come to that, of any other opera company in the kingdom. North’s role is a nice nod to localism, also reflected in the menu.