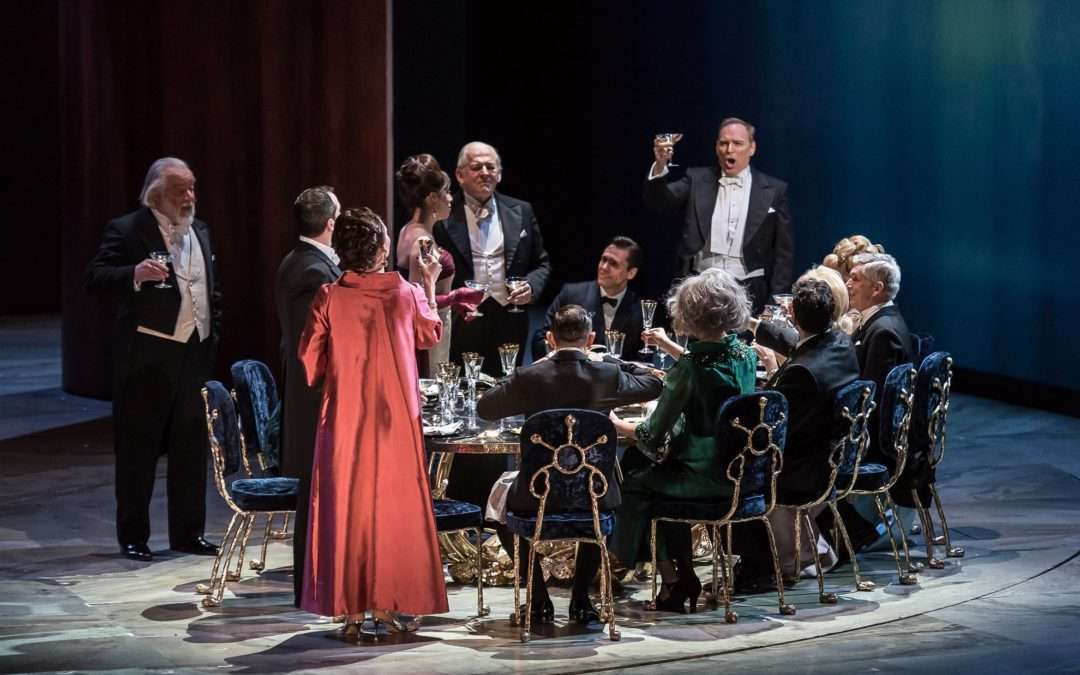 What was the last performance of an opera which the librettist directed and the composer conducted? I’m sure my learned colleagues will know, but the Royal Opera’s production of The Exterminating Angel by librettist Tom Cairns and composer Thomas Adès is the only example of this double I can think of. It is grand opera, with arias, ensembles and choruses, expensive-looking art-deco sets and costumes by Hildegard Bechtler, and a mighty orchestra with tuned percussion in one of the stage-adjacent boxes, harp and plucked string-instruments in the other, and Cynthia Millar’s ondes martenot somewhere.

The opera, which had its première at the 2016 Salzburg Festival and is going on to the Met (the London run ends on 8th May), is inspired by Luis Buñuel’s great 1962 film, El ángel exterminador, which I have not seen again in the half-century since it first appeared. But the plot remains clear in memory: the mostly aristocratic guests at a swanky Mexican dinner party find they are unable to leave; though the door is open, no one can get out (most of the servants had a premonition, and have fled) and no one can come in. Eventually they revert to primitive savagery, as in Lord of the Flies, and would starve to death were it not for the sheep which, along with a performing bear, was originally to have been part of a surrealist entertainment for the dinner party. (Live sheep are involved in the production, but none gets barbecued.) A common reading of the film is that it is an allegory of Franco’s Spain being trapped in lassitude by its inability to deal frankly with the aftermath of the Civil War; the Adès-Cairns version doesn’t seem to lend itself to such tidy explication.

Adès has been collaborating with Cairns on the libretto since 2009. According to the (unusually informative) programme notes, they ended up with something closer to the film than they had imagined possible. The reason it was a difficult task reveals itself in the staging. The dinner party hosts, the Marqués (Charles Workman) and Marquesa (Amanda Echalaz) de Nobile, have 17 guests in the film. In the opera these are reduced to a dozen; when you add the butler, Julio (Morgan Moody), that means you have 15 principal roles. This is not so difficult for film actors – playing the roles of their characters is their day job. But for singers this can be a challenge, especially as they are meant to be part of a single social unit (the dinner party), and so this is from start to finish an ensemble piece, though you will seldom have heard a starrier cast. Anne Sofie von Otter, Christine Rice, a couple of operatic knights, Sir Thomas Allen and Sir John Tomlinson, and younger luminaries (or soon to be) such as Iestyn Davies, Ed Lyons, Frédéric Antoun, Sally Matthews, David Adam Moore, Sten Byriel and Sophie Bevan all created their roles at Salzburg – one hell of a casting coup.

Cairns has done a magnificent job as director. Each of the singers behaves as if in a film or a play – that is, when singing, they all look at the person or group to whom the dialogue is addressed, making eye contact if possible. Though this is the first law of opera direction, it is seldom so impeccably observed. The duets, trios and other ensembles are beautifully crafted from this point of view; the stage action is also artfully fashioned, so that sub-plots (mostly involving sex) are indicated dramatically but without distracting from the sung lines – as happens in the best productions of the last act of Der Rosenkavalier.

As for Adès’s music, as Paul Griffiths says in his brilliant programme note, this is “perhaps the walziest opera since Der Rosenkavalier”. Like Richard Strauss, Adès has a thing about women’s voices in the higher register. Griffiths says this “intricate trickling in the very high treble” was present in Adès’s very first piece. Here it takes a little getting used to, especially the Woodbird-type warblings of the character of the virginal opera singer, Leticia Maynar (Audrey Luna), who sings so high above the stave that it’s a wonder the human ear can detect the sound.

She is given a generous aria – the one she fails or refuses to sing in two false starts – which turns out the hold the key to the release of those party guests who have not died from illness, or from a Tristan-and-Isolde-style double suicide. Leticia’s aria underlines a Jewish theme in Adès’s opera, as it is a setting of a 12th-century Zionide by Yehuda Halevi, detailing the longing for Jerusalem by those who regarded themselves as exiles, even in “great Spain”. This is the song that allows the survivors their freedom – so perhaps the moral of the opera is that their future is as fragile as that of Zionism. Or perhaps not. The aria given to Blanca, the pianist, sung gorgeously by Christine Rice, is, says Adès, “based on the children’s poem Over the Sea by Chaim Bialik, the father of modern Hebrew literature, with a very similar subject to Halevy’s Zionide”. So maybe the opera’s theme is “this larger dimension of homesickness and exile”, of which the return to Jerusalem “is the ultimate image”.

The score is full of wit, imagination and wry quotation. Adès goes on in the programme to say that “the variations Blanca performs on the piano in Act I are of course not really by Paradisi but my own variations on the Ladino song Lavaba la blanca niña, which has an unassuageable harmonic structure very typical of Jewish music of longing and bereavement”. I must pay tribute to the cast: during the interval I remarked to an eminent musicologist that, for nearly all of them, it is a very hard sing. “It’s brutal,” she replied. Not to be missed, though.