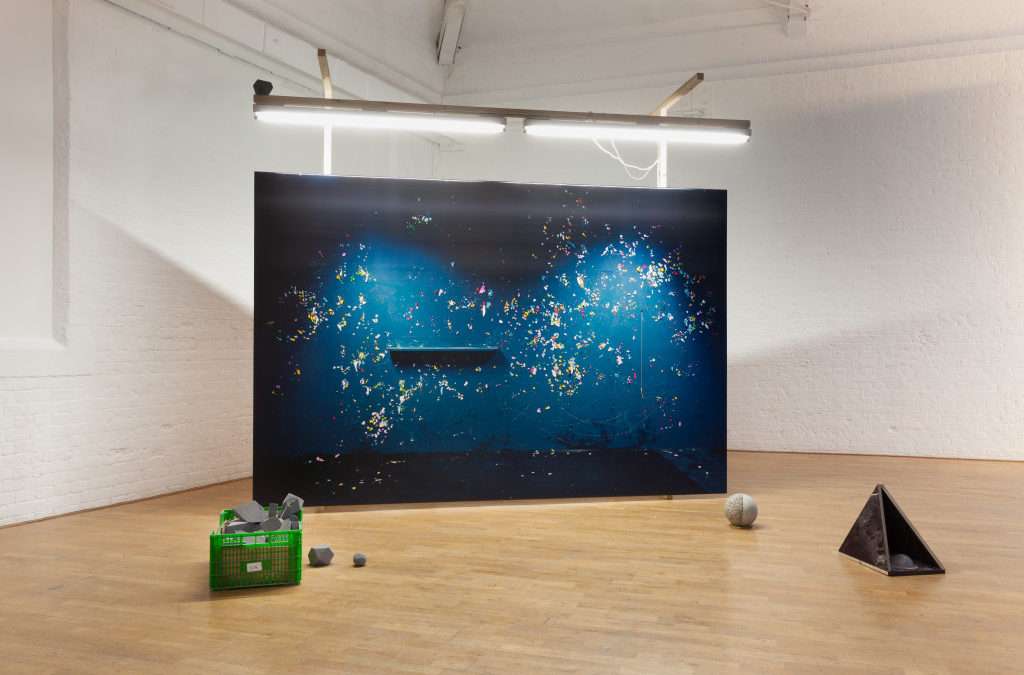 Before you enter, if you pause, you might read an introduction to Anne Hardy’s exhibition FIELD at MAO in her own words:

Within the spaces, we encounter built structures, objects, colour fields of carpet and audio. Her starting points for work are often found or ‘lost’ objects, for example, a breezeblock that has been adapted to be a weightlifting weight. The ‘lost’ sounds that occur in the process of making her work are recorded, then used in audio compositions. Offcuts of hardboard from previous works are used here to define a shape for the newly built structure in the Upper Gallery.

Priming us before we enter the spaces above, she gives us all we need to fully immerse ourselves, like a magician who tells you how she will perform her next trick; it creates the suspension of disbelief. However, Hardy then cites ambiguity as an ongoing and continuous preoccupation, one that persists in threading its way through her work in the accidental, the incidental, the retrieval of loss. You never really know where she is going next, because she is always casting back to what she has left behind in her last making. She then emphasizes the obscure with each title she gives her work.

The show starts with Hardy setting the scene: a deep blue photographic image expanded to 335cm x 240cm x 200 cm and printed on vinyl is downlit with white strip lights and free standing on a wooden frame “to give it a similar architectural presence as the photographed space”. It is titled Pacific Palisades faded into remote vision, and comes from a constructed space in her studio, but it might be a billboard where years of posters ripped off have left their scattergun trace of mulitcoloured corners. Hardy tells us that the image “came out of my fascination with a small section of blue wall in another image I had made”, and yet its title references the ocean where currently islands of plastic detritus are gathering. Clarity of process, but ambiguity of meaning.

Next we step into a room scooped with sky blue carpet. At its centre a Tardis-like structure made out of plywood scraps and offcuts from previous work houses a soundscape of lost sounds and found words. We have crossed the threshold of the frame (Hardy is known for her single photographic images of constructed spaces) into a colour field so saturated we become flat. The effect is complete immersion in a work of art that is at once disorientating and strangely familiar: A scoop with a shelter. I look up to check if we are being filmed, such is the feeling of being on the inside.

Inside the structure Pitch Black, a smooth echo plays on a loop with nothing but a bare light bulb to accompany the soundtrack of Hardy’s “memories of atmospheres”. The 7minute and 10 second piece, although born out of random components, is elegantly composed – or collaged – into a sequence of new patterns. Chaos has been assimilated into a new order… NASA ought to train its astronauts with this installation as the experience is otherworldly.

We step out of this strange place into a white walled gallery hung with photograms, a familiar pause: art to look at on the walls. Yet these images are made from the swept up detritus of her studio floor. Anne Hardy’s procedural structure grows organically around each tentatively set line of enquiry; it is like a kind of freeform architecture of the mind. And then, on the threshold of her final field of gold, we are asked to take off our shoes.

The Piper Gallery is covered floor to ceiling in a “dark yellow” carpet punctuated with objects that are not what they seem: glass balloons on the floor, marbled concrete and tangled mounds of edging coloured in exactly the carpet’s hue like something a worm had left behind. Strips of analogue tape ripple in two rows from the ceiling and white holosonic speakers loop a 6minute and 40 second audio Punctuated Remains. It is like a playroom: things can become anything you want them to be. Somehow the cyanotype blue colour field we came through to get here underscores this deep yellow – and mentally we are becalmed, feet on the soft carpet, as if in green pastures.

If there were to be a criticism of FIELD it would be that Hardy is too generous, too open about her whole process, and yet that is exactly what makes it such an achievement. Somehow in the random leftovers of former projects Hardy picks up brilliant new threads that form the record of her making. How she explores them, puts them together in new and unexpected ways, is nothing short of alchemy. She takes us beyond the static frame of concepts into living pulsing fields of colour and beating with original sounds. For me, walking into her frame is a welcome respite from the screens we are all beholden to.

In a world steadily overwhelmed with the detritus of consumerism, this sort of positive appropriation of waste might represent a kind of solution to the problem of throwaway culture. FIELD makes us question what we are throwing away, and why. What fields have we lost with our own forgetful dumping? It made me think of a discussion I once had with the up-cycler Hayley Kresse (Elvis & Kresse make merchandise from found materials):  “When I see a garbage dump I don’t see a problem, I see solutions”. And this is how I read Hardy’s last ambiguous title: An Abandonment was accountable for the Accumulation of Acid After Dark.