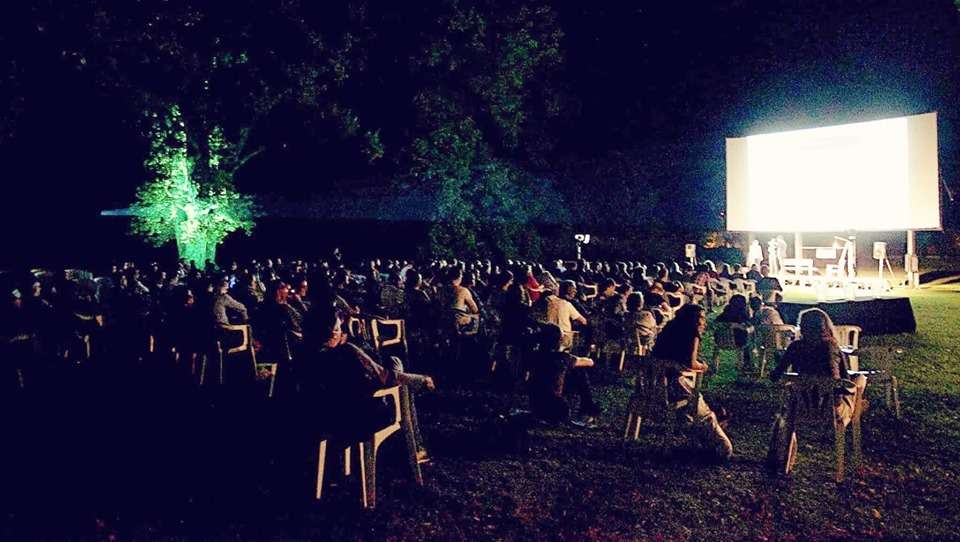 The biggest, industry-oriented of the world’s film-festivals are often described as having a “hothouse” atmosphere—how ironic, then, that one of the most casual, laid-back and non-materialistic celebrations of cinematic art, northern Italy’s Concorto, should count an actual greenhouse as one of its main screening-venues.

Not that this structure, known as “Teatro Serra,” is anything other than an architecturally striking and historically august edifice. Commissioned by the aristocratic Raggio family, the greenhouse formed part of their estate, Villa Fortunata (now owned by the local municipality and renamed Parco Raggio) built near the centre of the small town of Pontenure. The large but elegant greenhouse, an affair of glass, cast iron and cement, was designed by Luigi Rovelli and completed in the mid-1880s. It comprises two wings connected by a covered passage, into which a small stage and a couple of dozen seats were cleverly inserted. This space was mainly used by the Raggios to stage plays and entertainments for their own amusement, but occasionally eminent visitors trod the boards: legend has it that the woman often described as the greatest actress of all time, Eleonora Duse (the original “doozy”) performed La Dame aux Camélias here.

Concorto’s Teatro Serra screenings take place after midnight, and in silence. As a concession to the park’s neighbouring residents, the films are shown with the sound piped into bluetooth headsets, meaning that attendees can actually stand outside the main structure of the greenhouse and still get a good view of the screen (actually preferable to sitting inside, given the lingering warmth inside the structure itself) either through the Teatro’s open doors or through the glass windows which comprise its walls.

Since its inception in 2002, Concorto—whose 18th edition ran from August 17th to 24th—has been a shorts-only festival (30 minutes maximum), and the Teatro Serra hosts non-competitive sidebars including edgy experimenta grouped under the “Ubik” banner. I saw only one greenhouse projection, standing outside and observing through the glass—a slightly voyeuristic stance, quite fitting for Magdalena Jaroszewicz Ubik titleShooting Stars, a 16-minute Polish production entirely shot from her apartment’s balcony, looking down on youthful fireworks-igniting neighbours as they raucously celebrate New Year’s Eve.

The main body of the festival is its international competition; I was on the jury this year, meaning I watched a total of 52 works, shown each evening at 9pm on a big outdoor screen a couple of hundred yards from the Teatro Serra greenhouse. This is also a magical kind of setting—easygoing and bohemian with free pasta ladled out on “mensa” tables each night at 8pm and midnight, Concorto in many ways feels more like a music event than a film festival. Adding to the atmosphere, the long Milan-Bologna inter-city trains regularly thunder past (not too noisily) on the edge of the park, while the regular application of insect-repellent is necessary to ward off the area’s persistent and hungry zanzari mosquitoes.

Despite August being the big holiday month in Italy, the competition programmes were consistently well-attended by an audience mainly drawn from Pontenure (pop. 10,000) and the nearby city of Piacenza (pop. 100,000), just over 10km away. Filmmakers, press-delegates, film-professionals and the jury stay in Piacenza, a historic settlement near the confluence of the Po and Trebbia rivers—the Po marks the border between the provinces of Emilia Romagna and Lombardy. Shuttle buses whizz guests from Piacenza to Pontenure in the early evening, and back again after midnight—though one balmy evening I elected to make the 100-minute journey on foot, a memorable trek though an insect-buzzing landscape mainly comprising farmers’ fields. For several days afterwards, I boasted numerous subcutaneous souvenirs of this walk, scattered across my lower limbs.

Of long-standing strategic and commercial importance, Piacenza—home town of Giorgio Armani and football’s Inzaghi brothers—now has a backwaterish feel. Its streets are semi-deserted during the August week when Concorto takes place: the two mainstream cinemas are shut, and the only operating picture-house is the Roma near the train station, a porn-only emporium which exudes a distinct early-80s feel.

Instead, the festival uses a small, tucked-away palazzo (its central greenery a haunt of several rabbits and a cat, Ottavia) as an afternoon venue for screenings, workshops and industry events. The closing ceremony takes place at Arena Daturi, a sports field almost in the shadow of the city’s renaissance landmark, the never-finished, 16th century Palazzo Farnese. The latter is now the municipal museum: treasures include a Botticelli “tondo” (circular painting) of Madonna, holy child and infant St John—and, tucked away in the basement, the famed “Liver of Piacenza,” a tiny bronze replica of a sheep’s internal organ. This remarkable artefact was used for divinatory purposes during the Etruscan era, a couple of centuries before Christ by “haruspices” whose job it was to inspect the organs of freshly-slaughtered bovines in search of messages from the gods.

One didn’t need supernatural powers to predict which film would win Concorto’s audience award this year: it went to Bruno Collet’s superb French animation Memorable, about a painter succumbing to Alzheimer’s, a moving and beautiful evocation of mental decline and a celebration of spousal devotion worthy of Michael Haneke’s Amour.

We on the international jury gave it one of our special mentions, though our top gong, the “Asino d’Oro” (Golden Donkey) went to Lithuanian entryCommunity Gardens by Vytautas Kaktus. It’s an unsettling quarter-hour study of a mildly dysfunctional family spending a weekend in the small village where they have a house: main focus is on the thirtysomething only child of ageing parents, briefly back home from his expat residence in Albania.

An accidental, spectacular conflagration brings the villagers together, and a chance encounter leads our sad-sack protagonist to ponder the path not taken. Selected for Critics’ Week at Cannes, Community Gardens introduces Katkus as a bold and promising voice on the European scene, one who evidently has considerably more flair for image composition and camera placement/movement than most of his peers (he even dares wrap things up with that most regrettably unfashionable of cappers, a freeze-frame!.) Given the way these things work, he´ll doubtless “progress” to feature-length films sooner rather than later, but events like Concorto confirm that these days short films have a vibrant and worthwhile network of their own.

That circuit is well-established nowadays, bringing emerging talent to out-of-the-way spots such as Pontenure; delights somehow all the more charming when savoured al fresco. Among our jury duties was a brief on-stage interview on the penultimate night when we were invited to share our impressions of the event so far. Looking out across the darkened park to the lights of the Teatro Serra, suddenly struck by the unreality of the whole experience, I responded: “Concorto is like a festival in a dream. And none of us wants to wake up.”