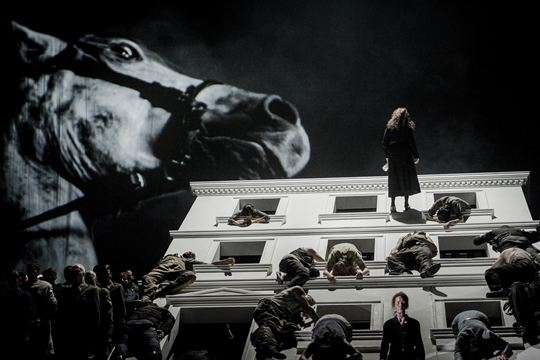 "This austere ‘oratorio in chiaroscuro’ is at times Picasso’s Guernica come to life" – ENO's The Force of Destiny. (C) Robert Workman

A brother is obsessed with murdering his sister for revenge; both are deranged. What better metaphor could there be for civil war? Calixto Bieito, directing his first staging of La forza del destino (a co-production with the Canadian Opera Company Toronto and the Met in New York), homes in on the parallel and ties the opera’s levels of conflict together so soundly that its drama becomes almost believable.

Bieito sets the work in the Spanish Civil War that ravaged his home country in the 1930s, taking us into the heart of its human tragedy. This austere ‘oratorio in chiaroscuro’, as he has described it, is at times Picasso’s Guernica come to life. Video projections (by Sarah Derendinger) are inspired by the artist’s tribute to the wrecked city: its horse, lightbulb, bull and screaming faces are picked out and writ large; and in one climactic scene the chorus slides slowly from the windows of a skewed wall (huge, effective sets are by Rebecca Ringst).

Madness here lies not just in the war, but between the characters and within Leonora and Carlo themselves. In the opening scene their father, the Marquis of Calatrava, sits at the dinner table and takes two pills. A psychiatric drug? There may be a hereditary condition, to judge from his nervous wreck of a daughter. Leonora’s initial vacillations are the result of a shattered mind; her determination to become a hermit makes sense, as this girl wouldn’t last two minutes in a convent. As for Carlo, he descends from controlled determination to a murderous demon hell-bent on the destruction of both his sister and her “half-breed” lover, Alvaro.

You might expect chaos from Guernica, but instead Bieito harnesses the power of stillness to create atmospheres of remarkable intensity in which the music can work its own magic. In some crowd scenes the chorus stands in rows as if indeed singing oratorio; and to the accompaniment of the violin solo the Father Superior crops off Leonora’s hair. Not everything works so well; sometimes the libretto depicts action which simply isn’t happening, and the ripping-up of books is not only a cliché, but intrusively noisy, carried out en masse and at length.

As Alvaro Gwyn Hughes Jones sings with strength, accuracy and conviction, even if his edgy tone could use more opulence. Anthony Michaels-Moore is Carlo, packing a punch in both voice and villainy (while bearing an uncanny resemblance to Ralph Fiennes as Voldemort). As the Father Superior, James Creswell owns the stage with concentrated and sinister presence; Andrew Shore makes the most of bitter Friar Melitone. Preziosilla, the war-glorifying gypsy, is that ultimate Carmen, Israeli mezzo-soprano Rinat Shaham, gone to the dogs and the bottle, embodying gratuitous cruelty by kicking a pregnant girl in the stomach and delivering ‘Rataplan’ while picking off prisoners in summary execution.

The chorus and orchestra sound fabulous, the company’s new music director Mark Wigglesworth offering an interpretation that lives, breathes and is full of heart, graced with stunning solos from clarinettist Nicholas Cox and leader Janice Graham. Don’t expect the famous overture; it is replaced with the shorter Prelude to Verdi’s original version of Forza from 1862 – and Act III is tweaked closer to that earlier version too, to strengthen the drama between Alvaro and Carlo.

But ultimately this was Tamara Wilson’s night. As Leonora, the American soprano, making her ENO debut, has a diamond-solid technique, magnificently controlled crescendos proving the power she holds in reserve; her tone is radiant, her diction splendid (“Pity me,” she virtually spits). And her ability to inhabit the tremulous, twitchy nuttiness of this Leonora is all too convincing.

A triumph, then, if a qualified one: a staging dignified by maturity and, above all, compassion.