From the House of the Dead 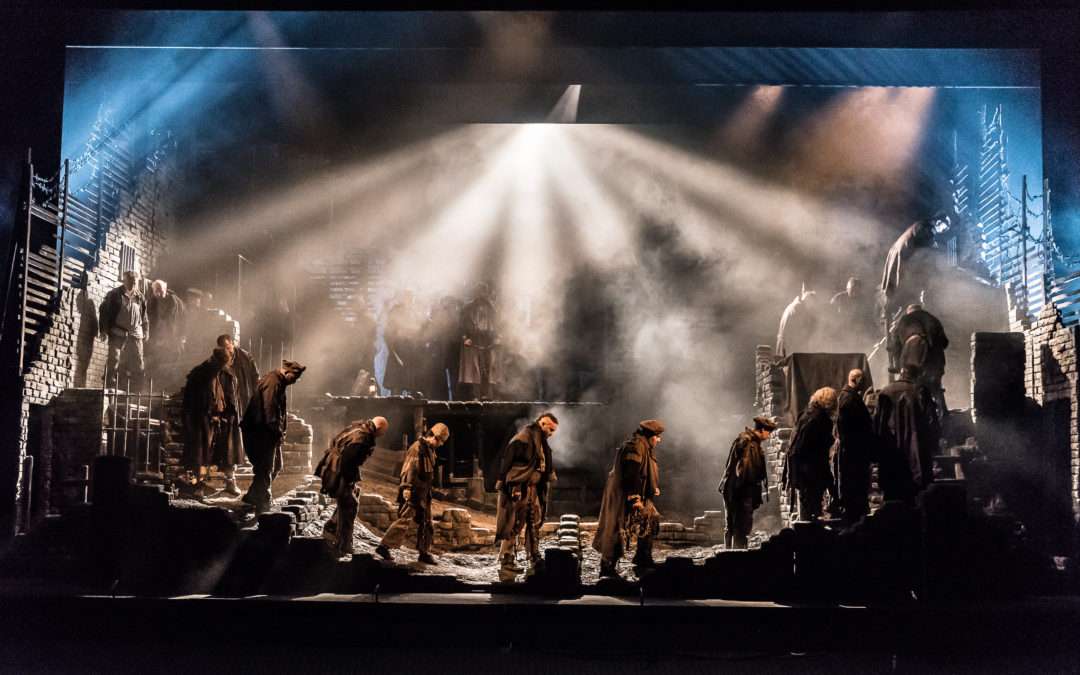 The stage is in darkness, and as the prelude plays we dimly pick out broken walls and piles of dirt. Among them lie slumped, huddled forms, at first barely distinguishable from the squalid surroundings, but which – as the light slowly lifts – we realise are in fact human beings: the inmates of the gulag. If there was ever any suggestion of celebration behind WNO’s idea of marking the centenary of the Bolshevik revolution in Russia with a series of Russian or Russian-inspired operas, the opening scenes of David Pountney’s 1982 production of From the House of the Dead provide a devastating corrective. Janáček and his literary source Dostoyevsky may have been criticising the Tsarist regime, but for an opera premiered in 1930 it’s startlingly prescient about what was already happening on an industrial scale in the socialist paradise a few hundred miles east of Brno.

And for a 35-year-old production – even one that’s not been revived particularly often – it’s strikingly fresh. This revival uses John Tyrrell’s brand-new (2017) critical edition of the score, and Pountney himself directs. The late Maria Björnson’s set, too, is still highly effective: a labyrinth of jagged brick that divides the prison up into hierarchical layers, and obstructs any attempt at free movement, even without the chains that shackle most of the cast and which jangle and clank throughout. In darkness, it’s a black, lumpen mass, broken only by points of lantern-light. When lit by Chris Ellis (Benjamin Naylor is credited with the lighting on tour) it becomes a world: sparks fly from a metal-working shop, and prisoners scuttle along mineshafts. There’s never any doubt that this closed society is still full of human activity, even if that activity is sometimes violent. There wasn’t much compassion about the way the prisoners poked and taunted the injured eagle that they’ve kept in a cage, represented here as a dishevelled feathery lump.

But that’s Dostoyevsky’s whole point; and, doubly so, Janáček’s. The circumstances – and, more challengingly, the individuals – may be brutal, but humanity somehow forces its way through. From the House of the Dead is essentially an ensemble piece, and the most piercing moment in this production comes with Shishkov’s (Simon Bailey) long Act Three narration of how he murdered his wife. His voice soared as he described her innocence, and a tone which – like the whole cast – he hadn’t been afraid to let harden and snarl, suddenly brightened and softened as he floated his lines over Janáček’s luminous orchestral writing. Tomáš Hanus’s orchestra responded gently but subtly, violins and flutes brushing against each other like interlocking fingers. And then, of course, came the denouement: and Bailey let his voice crack horribly as Janáček, with shocking honesty, tears away any chance of the redemption he’d set us up to expect.

That was just one moment amidst many. A cast that included Alan Oke as Skuratov, Mark le Brocq as Filka and a granite-toned, stentorian Robert Hayward as the Commandant all entered passionately and with intense attention to detail into a piece that gives no one character any real chance to steal the show – though Ben McAteer’s aristocratic prisoner-of-conscience Goryanchikov comes close, as does the boy Alyeya, practically the only high voice in the entire cast and sung here by Paula Greenwood with a keening sweetness. In stripping McAteer to his white undergarments in this world of mud-browns and sludge-greys, the production drew discreet parallels with another tormented Redeemer. McAteer and Greenwood were utterly without sentimentality as they brought out the tough but sincere tenderness in their two characters’ growing friendship.

Hanus and his orchestra certainly helped there; and although the orchestral playing throughout had a fittingly raw and urgent quality (hats off, in particular, to tuba: agile, oily and pitch-black), they were keenly responsive, and knew how and when to let the music glow from within: the vaulting hymn to the injured eagle – ‘Tsar of all the Forests!’ – set the hairs properly on end. No actual live eagle appeared in this revival, possibly due to the practicalities of touring, perhaps because it just felt a bit too Ellen Kent. A video projection didn’t quite do the job of conveying that climactic image of the great bird flying free (if your eyes were on the cast, you’ll have missed it). But by then the cumulative emotion was unstoppable, leaving you with the impression that this unmarketable, impractical, uncompromising opera of damaged men in a brutally ugly world might well be the most beautiful thing Janáček ever created.