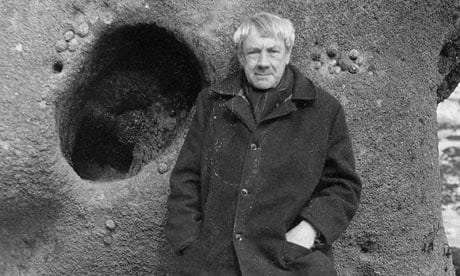 A year before his death in November 2009  I visited him and his wife, Ann at his lovely home and studio hidden away in the Wiltshire countryside and he talked about his early experiences both as a ‘part-time’ music critic in the 50s and the Circle.

George had many careers. He was a renowned artist as well as a critic. At the start of the Second World War he was studying to become a Chartered Surveyor and qualified in 1940 just before being drafted into the army. He was elected a Fellow of the Royal Institute of Chartered Surveyors in 1957. He had, however, always been interested in music and this led to his starting to write about music and to joining the Circle in 1948. Whgen he died in 2009 he was our oldest member in years and length of membership.

“I was involved in music from the age of 15 studying as a music student at the Blackheath Conservatoire and taking a postal course in strict counterpoint and when I met J.A. Westrup [Daily Telegraph music critic] and some of the others they asked me to start writing.  My first music notice was in 1941 for ‘In the Concert Room’ in  Westrup’s Monthly Music Record but then I was called up soon after that. It wasn’t until I was invalided from the army in 1944 that I got another chance through Ralph Hill, the Radio Times critic, who I knew.  He had a second under him called Stanley Bayliss who was still in the army, so Ralph said could you do some work for me, as concerts were starting to come back towards the end of the war, particularly in Covent Garden. My first notice for the Daily Mail was in March 1946.  Then Scott Goddard [President of the Circle in 1945] saw my notices in the Daily Mail, and being a bit jealous, said, Ralph has now got Stanley Bayliss, I think you should come to the News Chronicle.  So I was taken on by the Chronicle, at two guineas a time, it was just done by a letter saying I was the appointed as a critic.  The tickets went to Scott Goddard who then wrote to me asking me to cover such and such. Very often I did the London ones when he was away at a festival.  In
fact although Goddard was the music critic, I did more than he did.

“When Glyndebourne re-opened in 1950 I happened to cover the first two operas of the re-opening,and I had quite a lot of space to cover that because the paper believed the public would be interested, due to it being Glyndebourne, Mozart, Christie and with his wife being a singer. [He covered Die Entfuhrung aus den Serail on 7th July 1950 and on the 8th Cosi fan tutte]. I was also the London music critic for the Penguin Music Magazine, so I did other work outside of newspaper reviews – this was a very good publication which allowed me to expand some notices I did for the
paper.

“It was tough work in those days as we had to get the reviews in the same evening and I was paid 2 guineas a time, plus expenses when I started in 1944 and it always remained at 2 guineas as far as I remember. At one time I was a member of the ballet section of the Circle, since I did cover it sometimes, but as it was not my true interest I resigned from
that area of the Circle.”

“With the revival of Covent Garden, which had been a dance hall during the war, I found myself there, certainly once every week, since in those days you not only covered the first performance, but also whenever there was a change of cast, so that you got to know a vast amount of opera, through seeing it two or three times.

“Covent Garden was in a bit of a state, and we were always pushing them to do better – I remember meeting Philip Hope-Wallace on one occasion and he said in his lordly voice, ‘I see you’ve been bashing Covent Garden,’ I said,
Well yes, and he replied ‘Well bash them harder.’

“Reviews had to be phoned in by 9pm – or you could go into the newspaper office and type them, you had to be pretty smart with the phone-ins, since the telephone boxes hadn’t got any lights in them, and it was all pretty tight. I used to make notes whilst the performance was taking place. Going into the office in Bouverie Street was always interesting, as you would for instance meet Vicky doing one of his cartoons, or Alan Dent the drama critic. Of course you were limited to under 300 words for the review unless it was something very special. The notices were however in the hands of the
night editor, who would sometimes come up with an awful title for what you had written.

“There was one occasion at the Albert Hall for a piano recital when  a light bulb exploded over the artist, I ignored this in my review, but I got a call from the paper’s editor asking me why I had not mentioned this in my piece.  I said I was a music critic, not a commentator on the state of the hall – but he said the Mail had reported it, the Express had it. So I got a reprimand for that.  There was a lot of that, but at least it was better than before the war, when what people were wearing was covered rather than the artists’ performance.

“I worked for The News Chronicle for 12 years and after that job foundered I worked free lance and became very much involved in regard to the music of Sir Arthur Bliss. Both I and Scott Goddard were forced into resigning from the News Chronicle due to the following incident. Goddard told me he met the Editor of the paper in a passageway and said, ‘Oh, Dannatt and I are finding it increasingly difficult to cope with the amount of work coming in, so I’ve taken on two more critics’ [Noel Goodwin and Anthony Milner].

“Shortly after he waltzed off to a Festival leaving me in charge of London, as typical, asking me to instruct the two newcomers as to how to cope with policies, word lengths, the procedure about passing over their notices to the paper,
etc.”

“In 1948 it was probably Scott Goddard and Frank Howells who said to me, you ought to join the Circle – the rule in those days was that you had to have written for a responsible paper for two years – of course money from reviews was only a small part of my income, since I was a Chartered Surveyor and I managed to do both jobs.  You had to be put up by two sponsors who checked your credentials.  After being elected a member I did attend a few meetings where people were considered for membership and the criteria were pretty tough. For instance I remember that Hans Keller was initially turned down for membership, with Martin Cooper reading out some reviews and stating that we could not have someone writing like that!  Keller did become a member in 1950 however. On another occasion William Mann, who had
just started writing for The Times wished to become a member and at the Wigmore Hall he went down on his knees to me asking whether he had been accepted, I said yes he had – but when he broadcast this fact, Geoffrey Sharp the President became very annoyed and demanded to know who had told Mann this and I had to confess – I was told off for spilling the beans.

“The music section did have meetings with people from the music world, often in the Artists room at the Wigmore Hall. I recall David Webster came and lectured us about the rude things we had said about Covent Garden but Hope-Wallace got tough with him and asked why we didn’t have more British singers!

“Once at a meeting it was suggested that each critic write a piece about his favourite work or composer and read it out at a meeting – however only one critic rose to the challenge, A V Coton [Daily Telegraph] and when he read it out the rest of the critics were stunned by his piece and felt they could not compete.

“It was rewarding to be so cordially accepted by other members of the music section many of whom were long established critics and ‘friendships’ developed easily with a number of them, especially through meeting them two to four times a week at concerts”.

As well as painting, George remained active in the Arthur Bliss society right to the end.

“I’m doing a lot of work helping to run the Arthur Bliss society, which they started in Cheltenham, of which I am the Vice President, in fact I have something everyday which I have to deal with.  I knew Bliss very well for twenty years and I have written a lot about his music.  The society is very well organised with proper meetings, sometimes here and minutes etc.  Bliss has been slightly relegated in the musical world, I don’t know why because after the first world war,he was really THE composer, producing brilliant out of the way work, I think Benjamin Britten said ‘we all look up to Bliss as the breaker of rules’. He was a wonderful man who often came and stayed using my piano for his compositions.”