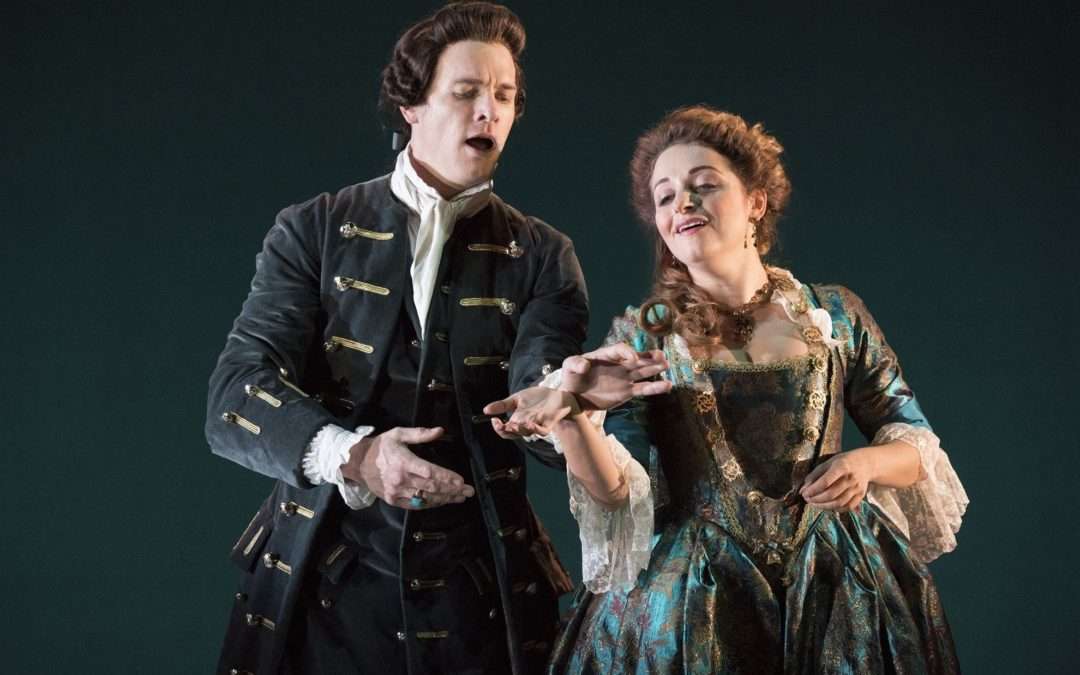 Julius Caesar in Egypt is probably Handel’s most popular and approachable opera. Its story is very similar to Bernard Shaw’s play Caesar and Cleopatra. But it is the brilliance and memorable quality of so many of its arias that make it so popular and powerful. At Saffron Hall during the vast refreshment interval in the middle of the opera, I was sitting at a table with strangers who wanted to know how I was enjoying myself. Critics criticise but need not rain on the parade too destructively: those who have paid for their tickets have a right to get as much enjoyment as they can. So of course I took refuge in celebrating the wonderful music.

James Conway, who did the production and is the long-standing boss of English Touring Opera, has done a lot of Handel and definitely believes that less is more – less scenery, less direction, less attention to detail or meaning. In a voluminous director’s note in the programme he attempts a justification for his approach – including suggesting that productions of Giulio Cesare in Egitto he has seen seem to contain much comedy for an artform known as opera seria. Conway does not like shifts of tone. His first attempt at staging the work was on an outdoor stage with little by way of set or costumes. Severity is a decent teacher, he writes, adding that he “cannot say what it [all] means”.

The note touches on history around the opera’s time of composition without much evident understanding. Conway proposes a vague parallel between Cleopatra’s lot and the sexy French of Louis XV’s court – though the Protestant UK monarchy demonstrated exactly the same morals in the 1720s, and Louis XV was only 14 years old when Handel’s opera had its London premiere. Conway’s comments about Great Britain’s Protestant monarchy seem irrelevant. Handel profited during his time in Rome from the patronage of various music-loving cardinals, but was also a devout Protestant and neither inclined to Catholicism nor to the wrong line of Stuarts.

Saffron Hall was one of the few tour locations where the opera was given all on one day. Conway for ten of the performance locations split the work half one night, half the next – charging for separate tickets with a discount; not a justifiable experiment. Dragging it all out added (even when done between 4pm and 10.15pm at Saffron Hall) to disappointment with the scenic blandness and poor direction of the performers. Why were the Romans in late 18th-century uniforms (the age of Nelson and Napoleon’s encounter in Egypt)? Worse, Conway provided titles in English that translated bits of the recitative but not the arias, only briefly describing what a singer was going on about in an aria. Handel’s Italian operas work well in English, but this was falling between two stools.

Having seen the opera staged in a contemporary American military context by Peter Sellars near Paris (which took five hours and started challengingly at 9pm), as well as other fine productions in Munich especially, but also Copenhagen, Oslo (by Stefan Herheim), Glyndebourne, Glasgow, our own Royal Opera at the Shaftesbury Theatre, and the Coliseum (John Copley with Janet Baker in the title role), I am aware there is a lot of genius material and it is not always all used. Indeed.

However, ETO here did not achieve a memorable outing for this witty and moving masterpiece. The casting was as dubious as the set and costume designs by Cordelia Chisholm, Conway’s direction, and Jonathan Peter Kenny’s energetic unsubtle conducting. Cleopatra, performed with some charm and not a lot of taste by Soraya Mafi, is a gift role however done. So is the title role, though the speed at which Kenny required Christopher Ainslie to deliver his opening aria was so fast it really did not show his voice to advantage. Later Ainslie settled in firmly, but could never quite compete with Mafi’s overacted playing to the gallery (which marred her often appealing singing). Pompey’s widow and son (taken decently by Catherine Carby and Kitty Whately) supply much drama and emotion. But Cleopatra’s brother Tolomeo, a crucial linchpin, was very poorly sung by Benjamin Williamson. Thomas Scott-Cowell in the third counter-tenor (originally castrato) role of Cleopatra’s adviser Nireno supplied additional falsettist pleasure.

It is almost 40 years since the Arts Council decided that Opera For All (with piano accompaniment) was not good enough for the British public in the provinces. So Opera 80 was launched with a Mozart orchestra of 25 players to tour two popular operas to modest venues around England. Singers doing big roles in one of the two operas played small roles in the other. It really did take opera to places that never got it. Canadian-born James Conway, with his experience putting on Handel in Ireland with Opera Theatre Company (OTC), has converted ETO into a very different kind of project – and into the bargain has gained a lot of experience as an opera director himself. The supply of opera in the UK at a price that all can afford, as ETO is doing, has deteriorated now into a very mixed bag. Conway and ETO have been thriving as ENO has declined. But what now exists by way of arrangement is not good enough, though one can imagine the situation for under-nourished opera lovers getting even worse. Saffron Hall had quite a few empty seats. Conway has put ETO where he wants it to be and sustained it. But great works like Giulio Cesare deserve much more flair and real musical and theatrical commitment than is on offer here.