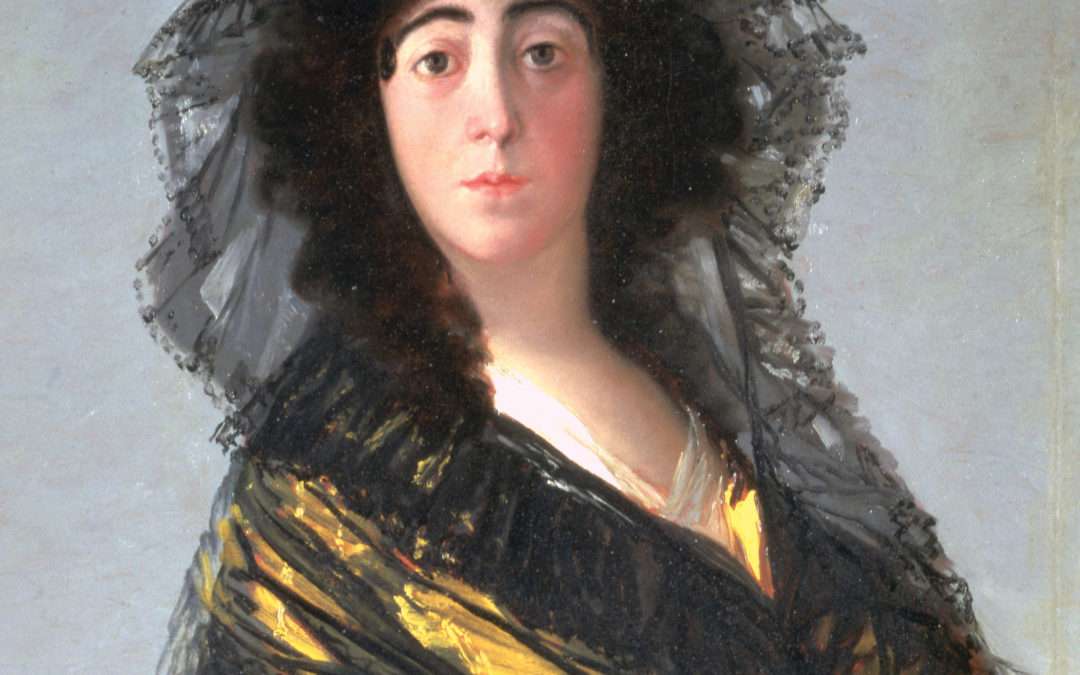 Francisco de Goya, The Duchess of Alba, 1797 © Courtesy of The Hispanic Society of America, New York

The prospect of an exhibition of portraits does not readily entice. Yet this show amply displays Goya’s abilities to pierce the conventions of the time with his sharply observant brush.

Essentially self-taught Goya’s first major commission that began his long career at the Spanish court was his 1783 portrait of the Count of Floridablanca. The Count stares back at us in a staged manner that follows prevailing conventions of late 18th century portraiture, producing an ennobled representation. But to the Count’s right he included a much freer, more lifelike representation of someone whose features he knew well, himself. Over his life he would turned his uncompromising gaze on himself again and again. Throughout he would record exactly what he saw with the lightest of touches of his confidant brush recorded insights into the effects of aging on himself. The exhibition’s first room also includes another self-portrait. Here is Goya as a man in his 30s with long, dark hair, which in the catalogue it is reproduced beside another self-portrait, shown in the final room of the exhibition, made 35 years later of him now in his late 60s. They both show his ability to capture a stunning realism and his uncompromising eye. He simply painted what was in front of him.

The staged formality of some of the early portraits leads one to wonder at the length of sittings some of his subjects gave him. In his profile portrait of the Infante Don Luis de Borbón he does not flatter, but depicts him as he saw him with flat, lank hair and aged, ruddy complexion. Yet when in the painting he made of Don Luis with his family, it is clear Goya used the little profile portrait of the Infante as his model for the larger painting, and this rendition is less vital, while other family members appear more lively, painted presumably from life.

Despite this piercing gaze, and truthful, sometimes unflattering renditions, Goya would remain in demand among the great, the good and the sometimes not so good. Living through very turbulent times he painted personalities related to the upheavals he witnessed,notably those associated with the Napoleonic Wars in the Peninsular and, on occasion, withdrawing his sharper psychological insights for diplomatic reasons. His 1810 portrait of General Nicolas Philippe Guye, one of Napoleon’s most prestigious generals who was an expert in guerrilla warfare, is portrayed respectfully. The artist shows us Guye’s intelligence but also his hard eye, but the viewers eye is drawn more to the magnificence of his braided uniform and decorations.

His sitting with the Duke of Wellington in 1812 resulted in a small red chalk sketch that shows a man who is clearly exhausted. A few days earlier Wellington had been at the battle of Arapiles, one noted for the savage butchery resulting from it. Goya recorded the Duke’s sunken cheeks, drooping eyelids and haunted eyes. He is a man shocked by what he has seen. The oil portrait that resulted from this sketch is kinder, gone are the hollow cheeks, the haggard look, but the dark eyes remain and seem still haunted by the atrocities of war. Goya, it should be noted, had worked on his etchings of The Disasters of War in 1810.

With the portraits he made of his friends there was no escaping his gaze. He saw and painted faithfully the effect of partial paralysis on the face of Andrés dei Peral that may have resulted from a stroke. The unkempt hair of the young Bartolomé Sureda y Miseral indicates his liveliness. Clearly such sittings involved discussion, chat, jokes, and there they all are on the canvas in all their humanity. Portraits he made of his family are also depicted with great honesty, their foibles do not escape, yet he shows his clear pride and affection for and in them all.

But this is not solely a show overwhelmed with the personalities of grandees, despots and Goya’s nearest and dearest. His flittering brush work captures the textures of hair, be it thinning with age or a woman’s flyaway curls. Also the costumes and the textiles they were made from, with the wispiest of scumbling, he conjures the gleam of light across shot silks, extravagant embroideries and laces is shown with an almost impressionist array of dots, dashes and strokes that seem to overwhelm the restored King Ferdinand VII in his court dress, a social comment? The Count of Fernán Núñez’s breeches are clearly of matt velvet. Charles IV’s hunting dress, aside from the embroidered waistcoat, includes a coat of a textured woven cloth and Goya has not neglected to show the pattern knitted into his stockings.

Here is an exhibition that spans not just art history but social and political history too and is truly lush use of paint.