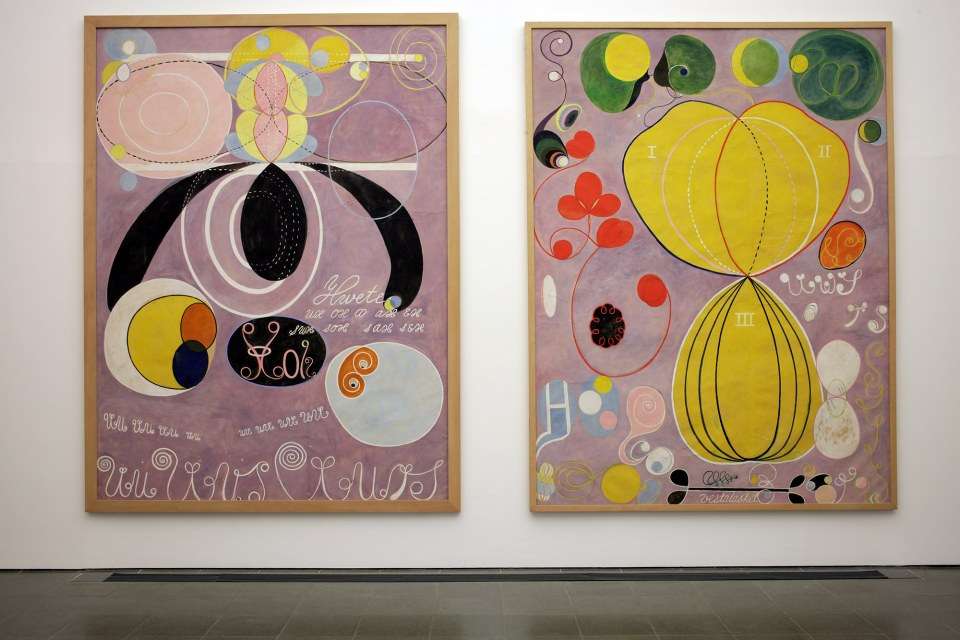 The Serpentine Gallery’s track record for exhibitions is erratic. Sometimes they come up with a winner, but here have been not a few duds in recent years – often artists from abroad who haven’t quite managed to get themselves a slot at Tate Modern. Constantly needing to fund-raise, because under the terms of their occupancy of this former tea-room in the Royal Parks their exhibitions must remain free, they have become perhaps more famous for their celebrity garden-parties than for the shows they present.

Every now and then there is an exception to this pattern. The Hilma af Klint show, on view at the Serpentine until Sunday 15th May, is a case in point. There is a mild irony in the fact that the show has been so successful with the public that the gallery ran out of catalogues very early in the run, and had to reprint. The exhibition-going public has had more faith in the enterprise than the gallery itself.

Who was Hilma af Klint? She was a Swedish artist, professionally trained at the Royal Academy of Fine Arts in Stockholm, who made a local reputation as a painter of landscapes, portraits and (particularly) botanical subjects, but who enjoyed a second, deliberately clandestine artistic life. What she produced in this hidden sphere was influenced by her participation in séances, and by an interest in theosophy, the rather tawdry belief system founded by the dodgy Russian occultist Helena Blavatsky. Theosophy also influenced a number of leading artists of the first Modernist generation, conspicuous among them Kandinsky, Kupka, Mondrian and Malevich.

Klint belonged to a very small group of five women artists of her own nationality, who held regular meetings in order to contact ‘spirit world leaders’ whom they called the ‘High Masters’. During a séance held in 1904, she was told by one of these spirit guides that she had been ‘commissioned’ to make paintings ‘on the astral plane’. What one sees at the Serpentine is the astonishing result.

Why wasn’t Klint better known in her own lifetime, and even long after it? Partly this was due to her own wish to keep what she did private. This was reinforced when, in 1908, Rudolph Steiner, then a prominent figure in the theosophical movement, later the founder of its development and derivate anthroposophy. Steiner quite liked some of her work, though he was critical of Klint’s activities as a medium, but he told her that what she did would not be understood for at least 50 years. Klint took him at his word, and specified in her will that her work should not be shown till 20 years after her death. She died aged 86 in 1944, in the middle of World War II, when Europe, including neutral Sweden, was distracted by things other than art.

A huge accumulation of her work was offered to the Moderna Museet in Stockholm in 1970. It was turned down by its then director, the ever-arrogant Pontus Hultén, because of its connection with spiritualism, which he considered to be a fraudulent belief system, though this was a link he was happy to ignore in the case of Kandinsky.

The rejection seems even more of a pity when you consider the fact that Sweden, in the first half of the 20th century, was not rich in artists of international renown. The biggest name is probably that of Anders Zorn (1860-1920), a flashy portraitist and painter of female nudes, somewhat in the mould of his exact contemporary John Singer Sargent (1856-1925). One can hardly think of two painters more radically different from Klint.

Klint really only debuted on to the public stage with her presence in a ground breaking international show, On the Spiritual In Art, curated by Maurice Tuchman at the Los Angeles Museum of Art in 1986. Since then, interest in her work has continued to rise. Seeing the show at the Serpentine, one can easily understand why. It is extremely coherent in its own stylistic terms and has tremendous visual impact. The idea that the artist was totally committed to expressing her ideas in terms of purely abstract forms is, however, impossible to sustain. Figurative images recur throughout her symbolic compositions, though usually in subsidiary roles. In this sense, she is quite different from pioneer male abstractionists such as Mondrian and Malevich, or even from Kandinsky, after he entered his purely abstract phase. It is in fact easier to think of her as a contributor to the Europe-wide Symbolist movement.

She is also a member of the awkward squad for today’s feminist artists, who might like to co-opt her to their cause. She withdrew from the world, and seems to have been entirely disengaged from any wish to promote women’s rights. Her value to feminism, now so strongly present in the politics of contemporary art, is that she showed that it was possible for a woman artist to produce dazzlingly original work, with no reference of any kind to the models offered by male painters, of her own day or earlier. Feminists looking for historical justification often point hopefully to the work of Artemisia Gentileschi as being, in their view, the equal to that of Caravaggio. The hard truth is that Artemisia was never Caravaggio’s equal as a stylistic innovator. Hilma af Klint remains intractably herself. In the history of 20th century art, there is nobody quite like her.