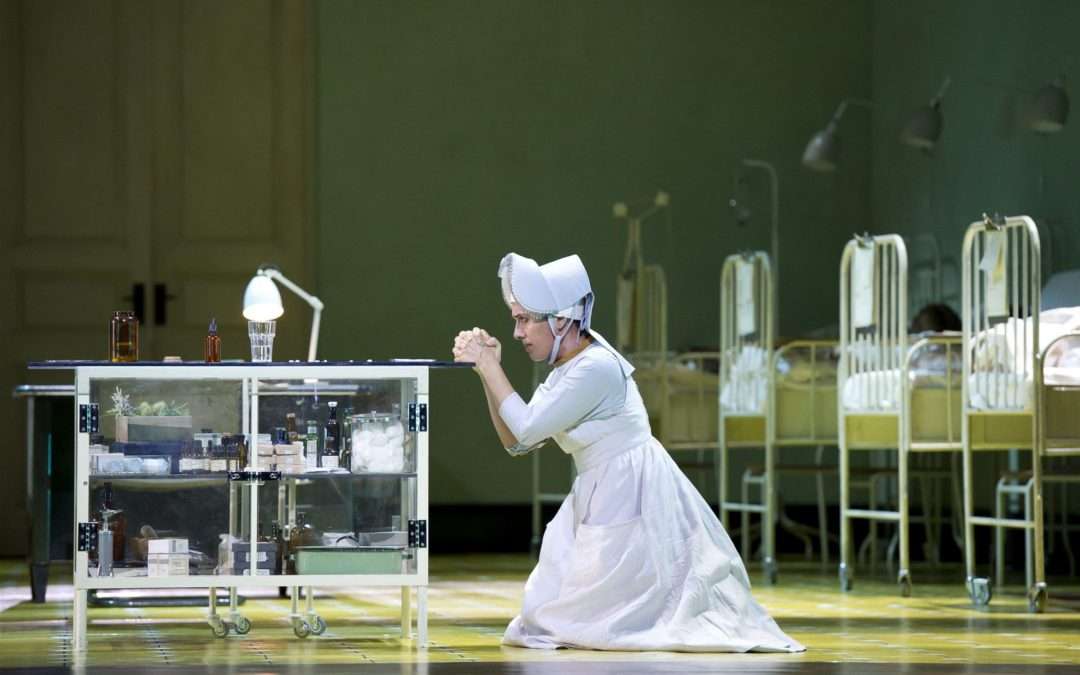 And then there were nuns

Fashioning a coherent evening’s entertainment out of three hour-long operas is a gamble, and the three plots Puccini chose are pretty creaky – but each is really a mini-masterpiece that explores the human condition. In Il tabarro, a melodrama set on a grimy canal boat, the dreams of the characters are crushed by poverty and misery. Suor Angelica is a sentimental tragedy wherein a young nun commits suicide when she hears her illegitimate child is dead. And Gianni Schicchi, the comic tailpiece, sees a snooty family being tricked out of their inheritance by a cunning upstart.

Richard Jones’s production, set in the austerity ’50s, captures the claustrophobia as well as the colour of these human stories. It was much admired when it opened in 2011, especially the detailed set designs: Ultz’s Seine-side quay with a realistic barge deck, Miriam Buether’s airy convent hospital ward and John Macfarlane’s fusty old man’s bedroom.

In this revival by Sarah Fahie and Benjamin Davis (Schicchi), Tabarro still doesn’t work. Suor Angelica is a revelation thanks to the radiant Ermonela Jaho, who captures the humility of a woman doing penance for a youthful indiscretion. When her monstrous aunt (an icy Anna Larsson) lets slip that Angelica’s son is dead, Jaho blazes with fury and despair. Then in a simple, pianissimo ‘Senza mamma’ she has you hanging on her every syllable and gulping back tears. At least one of the beautifully choreographed nuns’ choruses (with little orphans springing out of their hospital beds) slipped into West-End-musical mode.

Gianni Schicchi was laugh-out-loud funny, with impeccable comic timing from a cast of pros, about half of whom were in it last time round. A new pair of lovers stole our hearts – Susanna Hurrell sassy and bright as Lauretta, and light, idiomatic Italian tenor Paolo Fanale as Rinuccio. Lucio Gallo reprises his role as the roguish Schicchi, a strutting small-time spiv scenting a profit. Schicchi fits him much better than Michele in Il tabarro, where he was underpowered and uncomfortable.

Il tabarro was weakest, with conductor Nicola Luisotti occasionally struggling to hold orchestra, soloists and chorus together. A brief spark of lust kindled between Patricia Racette’s downtrodden Giorgetta and Carl Tanner’s burly Luigi, but the staging felt static and the murder at the end somehow failed to shock.