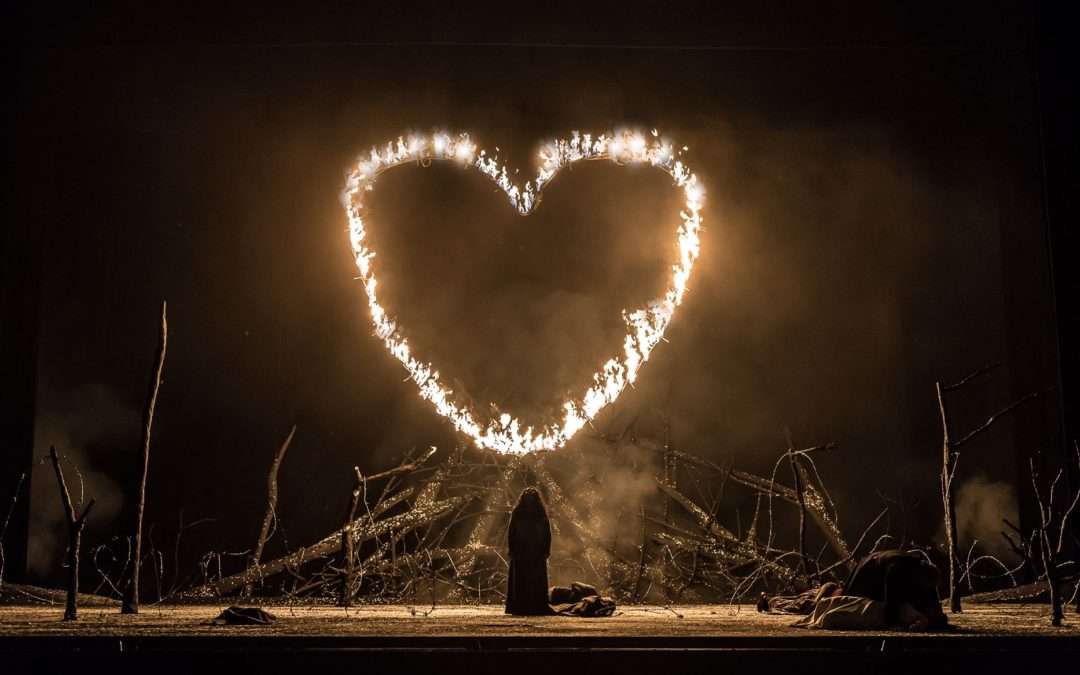 "A huge flaming heart set its seal on the bloodbath." (C) Clive Barda

Pity and terror: the basics of tragedy, pursued with ferocious focus by Verdi’s great 1853 opera. We all have a little chuckle when Trovatore is mentioned, of course (and the audience gamely manages a few more during the show): it’s too extreme, the characters mad, the plot berserk, the music inflamed. Who could take it seriously? And Verdi is certainly making big demands of us: to do so means abandoning any fond beliefs in a well-disposed God or universe. But it’s worth trying, at least for the duration of the piece.

This opera exists on at least two planes: a literal one, where people drunk on fantasies and wild emotion do their thing (the Count of Luna nutshelling the madness, happy to blow the world up and kill everyone because Leonora loves someone else), and another of pure abstraction, where all events are of risible inconsequence. There is a purity – almost serenity – to its nihilism that transcends the mayhem. Of all operas, it’s least “about” what happens on stage: it’s all in the combustible heart.

The conductor and director’s interesting task is to marry these strands: to depict the unthinking desperation of the action, the crazed propulsion of characters, events and music, while letting the piece’s wholly metaphysical nature emerge. No wonder it’s a challenge, and no wonder it hardly ever works.

It didn’t really work here, either, despite some intelligent attempts to come to grips with it. The big problem was in the vocal performances, very inconsistent on this cast B night; Trovatore’s very particular kind of pathos – sweet, drenched in nostalgia, arousing horror at the loneliness of these hopeless pleas spinning out into the void – needs a very particular balance between voice and orchestra, particularly for Leonora. Anna Pirozzi has a warm, open, lyrical tone with an affecting catch in the voice, but under pressure – and Trovatore’s lines certainly push the envelope – it goes a bit haywire: some of her phrases went through about four entirely different tones or zones of voice. Trovatore is an opera that will work on its music alone, but it needs the right singers. It is Leonora – the blameless victim, whose only crime is to think she’s starring in a mediaeval romance – who must set the tone. If that doesn’t work, there are going to be problems.

Another was Christopher Maltman’s Luna. It looked like odd casting anyway – he can do the villain, but Luna’s noble lyricism has never been his line – and, in concert with an announced throat infection, there was nothing here but individual notes, not all of them the right pitch. Certainly he has a strong stage presence, and projected the right kind of Terminator-like malevolence, but Luna needs more than that. Gregory Kunde was rather good as Manrico – forthright, not very shaded, and for once you could believe that he and Luna were brothers (supposing two brothers dressed like a ZZ Top tribute-band in Radstock).

The star was Marina Prudenskaya’s freaky Azucena – something of a party turn for this singer, and there were definite shades of her performance in the Berlin State Opera, Barenboim/Stölzl version (it’s on DVD, and well worth a look). It’s not the biggest voice but its focus and unwavering sureness of tone, as well as an intensely concentrated physical tension, made Azucena, as Verdi intended, the centre of events.

If Gianandrea Noseda’s conducting was more refined than the maniacal frenzy I secretly long for, there were intense compensations: the limpid accompaniments to those laments, the melancholy of single instruments, the woodwind atmospherics of the Part Four intro. In fact that last act approached a kind of perfection where, in its dying strains, the opera and its splintered aspects finally came together – of which more later.

David Bösch is a detailed director with a highly visual approach, often working with the same team of designers: Patrick Bannwart (projections and sets), Meentje Nielsen (costumes), Olaf Winter (lights). He likes grunge and graffiti. His frank acceptance of the ne plus ultra operatic nature of Trovatore – the characters like puppets, mostly singing to camera, plenty of arm movement – was understandable, though it didn’t give the audience much of a physical entrée into sympathetic relations with them, which we could have used. The gypsies were a joke circus troupe, unlikely to be much use in a firefight. There was quite a lot of clumsy chorus stage action. Amid barbed wire, torture, ugliness and eternal night, the characters dreamed childlike dreams of hearts and butterflies, sweet, pathetic cartoonish visions of peaceful love. Sometimes it worked, sometimes not. If the cast had been more on song it wouldn’t have got in the way. I understand Bösch’s idea that the characters are so locked in to their fantasies they fancy they have some control over things, but surely part of Trovatore’s effect lies precisely in their panicked realisation that everything is unimaginably worse than they could possibly think.

Things began to gel in Part Three, with Noseda generating real momentum and the lurid atmosphere starting to work (I’d ascribe this mostly to Azucena’s centripetal presence, focusing attention, centring the action, making the irrelevant invisible). The abortive wedding, with a sad, almost Mozartian air to Manrico’s unhappy epithalamium, led to a solid if not terrifically exciting ‘Di quella pira’. In Part Four, ‘D’amor sull’ali rosee’ was beautifully shaped by Noseda and Pirozzi finally located the exactly desired strain of rapt sadness. From here on nothing could go wrong, as tragedy finally pins everyone down. The skeletal strings of ‘Ai nostri monti’ and its reprise in the final trio of hypnotised doom were very special. A huge flaming heart set its seal on the bloodbath.