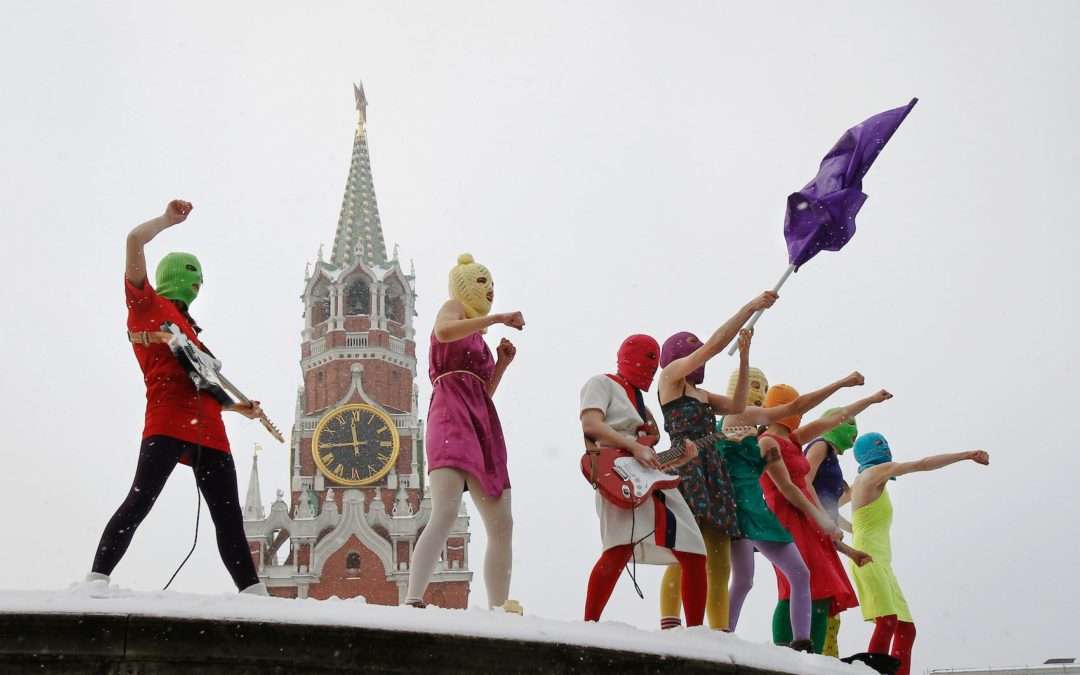 In March 2012 two members of the feminist punk group Pussy Riot were jailed for two years after the group’s performance in Moscow’s Cathedral of Christ the Saviour protesting against the Church’s support of Putin. The experience of one of them, Nadia Tolokonnikova, is the subject of an extraordinary theatrical event being performed by an all-female cast as part of a Saatchi Gallery exhibition until Christmas, created by Les Enfants Terribles.

The Saatchi Gallery’s exhibition, Art Riot, marks the centenary of the Russian Revolution through Russian protest art over the last 25 years, with posters, video art, photography and performance art, but a show-stealer is going to be an installation by a theatre company, Les Enfants Terribles, which in 2015 stole headlines with its Olivier-nominated Alice’s Adventures Underground immersive show in The Vaults beneath Waterloo Station when audiences of 750 and more trailed through 30 rooms after Alice and her White Rabbit.

Their new work, Inside Pussy Riot, is different. Running until December 24, it has a cast of 18 working in shifts of ten, from 11.15 am to 6.30pm with late shows on three nights of the week, each one lasting an hour. There are between 40 and 50 performances a day, with a new audience of about 15 arriving every seven minutes.

“What we do is story-telling, and Nadia’s story was one we desperately wanted to tell,” says Les Enfants Terribles’ founder Oliver Lansley. “We decided we wanted to immerse the audience in her story.”

The company has worked closely with Tolokonnikova since Lansley was approached by the Russian dissident and theatre producer Alexandrina Markvo after she saw Alice’s Adventures Underground, and the connection was made with Pussy Riot. “While the setting for the show is Russia, this situation is all too familiar in many countries today,” says Markvo, who is co-producing with Les Enfants Terribles producer James Seager. “I hope this blisteringly political production will also serve as a powerful reminder to citizens of democratic countries to cherish and defend their freedoms.”

The company is concerned with experimental theatre, not the agitprop that once characterised Soviet theatre. Though Inside Pussy Riot comes 16 years after Lansley, then 19, founded it, it’s a watershed in the development of Les Enfants Terribles. He had come to the business straight from school in Surrey – and a charismatic drama teacher – via youth theatre into acting, and thence to putting on his first show, Steven Berkoff’s West. He and Seager had acted together in a Shakespeare festival; they shared an impatience, wanting to get on stage rather than spend three years at drama school, and went into partnership.

The show they were reprising at Wilton’s Music Hall in October, Tribal Infants, a series of tales that uses puppets and music, was their first watershed in 2007, “where we decided this is what we want to do, the show where we really found our voice,” Lansley says. “We were hugely influenced by the European Absurdists, Ionesco, Berkoff, Roald Dahl, and it’s really a series of short morality tales. It’s a show that makes grown-ups feel like children.”

Inside Pussy Riot, however, tells the true story of the conceptual artist and political activist Nadezhda Tolokonnikova, known as Nadya Tolokno, who is part of the controversial street art group Voina that has more than 60 members, mostly students, and refuses to co-operate with state institutions, staging street protests and impromptu performances that do not stop short at vandalism. She was also part of the 11-strong feminist punk group Pussy Riot which made a 35-second guerrilla performance of a song, Virgin Mary Put Putin Away, inside Moscow’s Cathedral of Christ the Saviour in February 2012, after which she and another member were arrested and charged with “hooliganism motivated by religious hatred”.

In August that year Tolokonnikova was jailed for two years and sent to a female penal colony where she was expected to work 17 hours a day, sleep for three or four hours and have a day off every eighth week. She says she was frequently beaten up and made to stand in the Russian outdoors with a single layer of clothing. Amnesty International recognised her as a political prisoner. Her experiences, written as letters, were published on her release in December 2013 under an amnesty from the State Duma, and last year she published an autobiography, How to Start a Revolution.

“It feels like the right kind of story to be telling about Russia and the rest of the world at the moment,” says Lansley, the author of the play. “It’s the essence of what Pussy Riot stood for, much more than what they did in that church and what they were talking about then. Standing up against huge patriarchal authority is a very important message to be sending out. There was great boldness to what Nadia and Pussy Riot did, and we’ll do our very best to show that.”

And although this is about Tolokonnikova’s experiences, the take on them belongs to Lansley. In 2012 the company presented a more conventional, piece, Trench, based on the true story of a First World War sapper, and Seager and Lansley say they feel more comfortable with real-life narratives now than fantasy, which might mean becoming more politically engaged. “Art often needs to ask questions of society and hold up mirrors – never more so than now – and more than ever artists have a duty to try to be provocateurs,” Lansley says.

“We will be touching on Nadya’s nastier experiences,” he says, “but our responsibility it to create an uplifting experience, and while we don’t want to shy away from what happened to her, the trick is to get a balance.” There are no puppets in this production, but there are circus elements and the audience will be expected to take part, donning balaclava helmets and “standing up for what they believe”.