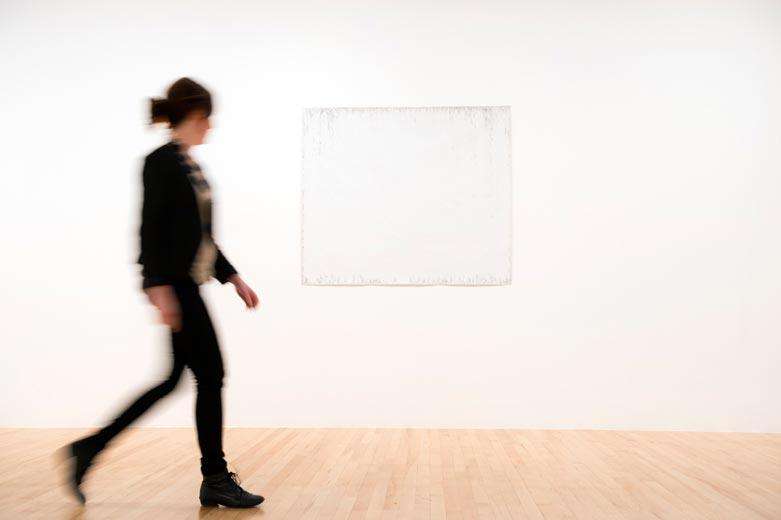 “Art is not what you see, but what you make others see”, Edgar Degas wrote.  In many ways predicating the role of art within modernism where the sensibility of the viewer’s reading of an art object is every bit as important as the object itself.

Invisible: Art about the Unseen 1957-2012, currently at the Hayward Gallery in London, is the sort of exhibition that gets up the nose of tabloid journalists. You can virtually hear them snorting that this isn’t art, just as they once expressed their philistine opposition to the purchase of Carl Andre’s ‘pile of bricks’, Equivalent VIII, 1966. After all why spend good money paying to go to a gallery to look at nothing when you could stay at home and watch paint dry? It was in 1957 at the Galerie Colette Allendy in Paris, that Yves Klein opened an exhibition in which he presented an apparently empty room. You can see how it might have annoyed, for he claimed that the entirely white walls were infused with a “pictorial sensibility in the raw state”, maintaining that the space was actually saturated with a force field so tangible that many were unable to enter the gallery ‘as if an invisible wall prevented them.’ Was this a sleight of hand, a clever publicity ploy or a visual treatise on the existential ideas of being and nothingness?  Jean Paul Sartre eat your heart out; an empty room, it seems, can speak a thousand words.

Klein was further to explore invisibility in a number of ways by collaborating with artists and architects and applying for a patent for his ‘air roof’.  A mixture of subversive showmanship and utopianism he believed that a ‘constant awareness of space’would allow humanity the chance to live in a state of grace outside the framework of repressive social conventions. It was no accident that he’d been a devout Catholic and was later to receive a black belt in judo at the Kodokan Institute in Tokyo. Genuinely fascinated by mystical ideas, by notions of the infinite, the indefinable and the absolute, he even became a Rosicrucian. For what he understood was that what is of most value often cannot be seen – faith and hope, for example – to be rather Christian about it. For Klein belief was as necessary to the practice of art as it was to religion; for art, like religion and love, requires a leap of faith.

By the late 1960s a number of Conceptual artists were making art that challenged the notion of the art object as something that is simply made by an artist for the viewer to look at. In 1967 the British duo, Terry Atkinson and Michael Baldwin, working as Art & Language, published an article inArts magazine entitled ‘Remarks on Air-conditioning: An Extravaganza of Blandness’. It proposed that a volume of air in an empty, air conditioned gallery was actually a work of art. This was accompanied by a difficult and arcane text, which given the empty gallery, was the thing that constituted the art work.

A whole range of other artists have also explored invisibility in various ways. Yoko Ono first exhibited her written Instructions for Paintings in conjunction with a concert that she gave in Japan in 1962. Her instruction paintings, as she pointed out, made “it possible to explore the invisible, the world beyond the concept of time and space…. In your head, a sunset can go on for days. You can eat up all the clouds in the sky…” To make the point that the instruction paintings were not simply graphic images in themselves, she had the instructions typed.  Her Hand Piece, typed in the summer of 1961 on a blank white page reads:

Raise your hand in the evening light

and watch it until it becomes transparent

and you see the sky and the trees through it.

In contrast you can feel a bit spooked when you walk through the thick wall of curtains into the pitch black room, The Ghost of James Lee Byars created by Byars in 1969, and have no sense of where you are, except for the faint glimmer of light around the exit and entrance that tells you you’re not being buried alive. Unnerving, too, is Tom Friedman’s empty plinth: Untitled (A Curse), 1992. For this he hired a professional witch to curse the space just above the pedestal. It was interesting at the private view to see just how cautiously some people approached. Superstition and the power of suggestion are, it seems, alive and well in the London art world.

There are also some invisible paintings by the Swiss artist Bruno Jakob, and a drawing that although it fills one of the huge galleries is virtually impossible to see as the Taiwanese artist Lai Chih-Sheng has traced near-invisible lines along the floor and walls to make a drawing that insinuates like a ghostly echo of the place.

If art is not just a mimicking and slavish copying of the world, then there’s more art here than at many a commercial art fair.  Certainly this exhibition will not be everyone’s cup of tea but what it reminds us is that with the exhaustion and ossification of established art vocabularies and styles, that ‘emptiness’ forces us to think; to project ideas and to ask questions. It is perhaps no coincidence that it should have been put on now when prices fetched by certain art works are reaching stratospheric levels and, over at the Tate, they are showing that ultimate piece of decadence, glistening with the very best diamonds that De Beers could supply, Damien Hirst’s skull, For the Love of God.  In the exhibition’s catalogue essay, Ralph Rugoff, the director of the Hayward, wonders if these are not the very circumstances that really make art invisible when he writes that ‘under these conditions, art disappears as a mere backdrop for flamboyant displays of social capital’.

This show is not going to have people queuing round the block. It is not a block buster or a money spinner. Can you imagine the merchandise? Blank tea-towels and T-shirts with nothing on them? It probably won’t be a big draw unless you have a Beckett-style sense of humour. But it does give us pause for thought. For as George Steiner wrote about language – though he might also have said the same of art: ‘Language can only deal meaningfully with a special, restricted segment of reality. The rest, and it is presumably the much larger part, is silence’.

Sue Hubbard’s new novel, Girl in White, is due from Cinnamon Press in October 2012.