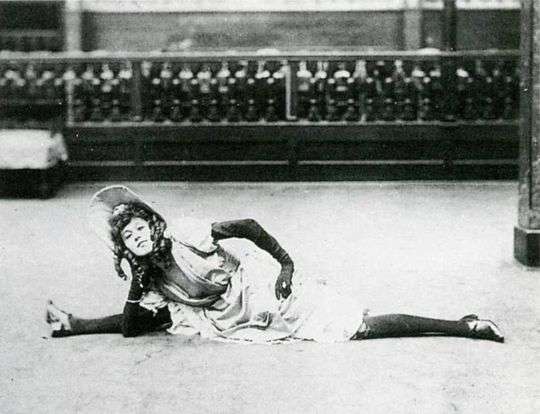 Nicknamed La Melinite after a powerful form of explosive, the dancer, Jane Avril, was one of the stars of the Moulin Rouge in the 1890s. Her fame was assured by a series of posters by Henri de Toulouse-Lautrec. She became the star of his world, as well as a close friend. This exhibition at the Courtauld brings together some of his painting and some photographs of the pair whose partnership symbolised the excitement and glamour of the time.

Henri de Toulouse-Lautrec (1864-1901), the son of an eccentric aristocratic French nobleman, had a genetic defect and he later suffered two
broken legs which left him disabled and short of stature. He became an artist of fin-de-siècleParis and his posters of dancing girls gained him considerable success. Most were of the revues in the nightclubs of Montmartre and the dancer he
captured most frequently was Jane Avril (1868-1943), who was nicknamed La Mélinite, r yellow acid. Born the illegitimate daughter of a courtesan, she was abused as a child, ran away and at 14 was taken to the Salpêtrière
hospital where she is said to have contracted the nervous disorder St VitusDance. It was while she was at Salpêtrière that she first learned to dance. Toulouse-Lautrec’s first pictures of Avril, who became a close friend, were not, however, as a
dancer. Rather they show her entering and leaving the Moulin Rouge.They are of a woman dressed in a long blue coat, pretty but pensive, eyes cast down,  her fair hair under blue hat and hands firmly in her pockets. She is a solitary figure. In more a sombre-faced mood, in a fur-trimmed turquoise coat with her now red hair,which suggests shehas coloured it, beneath a green flowered hat, she looks more than her 22 years. It is as if the weight of the world is upon her. The only time that she is seen smiling is in a lithograph by Maurice Binis, which predates her marriage to him and perhaps should be a pensive study as he turned out to be a gambler who led a double life as a transvestite.

Jane Avril in the entrance to the Moulin Rouge circa 1892. © The Courtauld Institute

Toulouse-Lautrec wearing Jane Avril’s hat and scarf circa 1892.  He was going to the “Women’s ball” held by the Courier francais. Unknown photographer, © The Courtauld Gallery

Where we get a more familiar painting of her is a sketch of the cancan dancer with the high-kicking leg and the yellow flounces of the frock, which are then transformed into a poster for her appearance at the Jardin de Paris. The addition of a musician’s hand grasping the neck of a double bass is reminiscent of the Japanese prints of the time. She is provocative, yet sultry, and Toulouse-Lautrec captures her alluring persona. It quickly established her as an instant success.

Toulouse-Lautrec, the most famous portrayer of the nightclubs of Paris yet an alcoholic who led a dissolute life, died in 1901 and the loyal Jane Avril, who briefly became an actress, settled into relative obscurity. She died in 1943.

Jane Avril at the Jardin de Paris. 1893 © The Courtauld Gallery