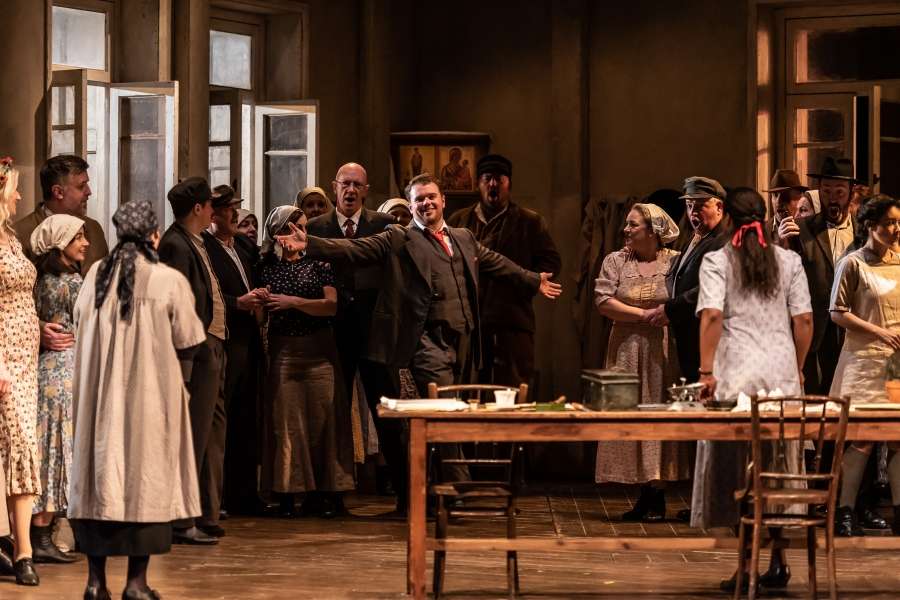 WNO’s latest staging of Katie Mitchell’s staging of Jenůfa (revived by director Eloise Lally) is given an additional layer of significance by current events. Janáček’s is an opera in a Slav language, in a production with various Slav participants, chronicling mounting tensions in a complex family with long-nursed grudges and a history of violence about to lead to murder. The first night’s conductor Tomáš Hanus felt the need to say a few words before launching the orchestra onto Janáček’s restless, treacherous score, with its exposed violin solo and its unusually prominent percussion.

The plot grows out of the late 19th-century concern with heredity, encoded as a family quarrel over an inheritance. Across the three generations on stage, we see recurring alcoholism and domestic violence, talents that cannot be used and emotions that cannot be expressed. People are trapped by their class, their gender and their age, and by provincial village life.

This tale of love and hate is structured around two triangles. Surprisingly, neither of them is to do with the sibling rivalry of the tale’s two half-brothers, as it would be in a French novel. The key is Jenůfa’s relationship with her stepmother, and the latter’s view of her dubious beaux.

Jenůfa is in a relationship with the miller. Nice enough, his drunken binges lie within what the village accepts as normal, but her step mother wants her to do better. Elizabeth Llewellyn brings a rich, creamy, restrained soprano voice to the title role, making full use of the lower reaches which Janáček demands.

Rhodri Prys Jones’s Števa is fun company, but Jenůfa’s intended proves weak and limited, so perhaps stepmother Kostelnička Buryjovka is right. Eliška Weissová, as the latter, has a show-stealer of a role and does not pass up the opportunity. A Lady Macbeth whose victim is her own step-grandson, Weissová is burdened and intermittently unhinged by her guilt in mad scenes undreamt of by Verdi or Donizetti.

Peter Berger has the evening’s biggest challenge: to turn the sullen, violent loser Laca Klemeň who slashes Jenůfa’s face into a sympathetic character who stands by her even as the truth is coming out. That Janáček supports him musically in this transformation takes nothing away from his achievement. We might note that the opera was written just a few years after Verklärte Nacht and Tess of the D’Urbervilles, also churning tales of pregnancy and redemption. How many of the women in the audience were convinced that marrying your violent stalker is a good option I couldn’t say; it makes Kate Pinkerton’s domestic prospects look comparatively rosy.

The action takes place first at the mill, with almost everything grubby white, sacks being lugged about and headscarves everywhere. We move to the Kostelnička’s home, which has a stronger colour palette and where the look (designer: Vicki Mortimer) is straight out of Vilhelm Hammershoi: clean, tidy and sparse. We return to the mill for a reception before Jenůfa’s wedding with Laca. Here Sion Goronwy’s jovial mayor and his fluttery daughter Francesca Saracino find themselves increasingly out of their depth. The villagers similarly come to sing and celebrate, but stay to gossip, judge and peer in at the windows much as they do in the Royal Opera’s Kat’a Kabanova, and with the same oppressive effect.

The area of action is limited in all directions, reflecting the limits of the characters’ lives except for when the back wall lifts to the flies to show a young girl surrounded by flowers running to the Kostelnička, perhaps a flashback.

An excellent revival, it prepares the way for the company’s Makropoulos Affair this autumn.