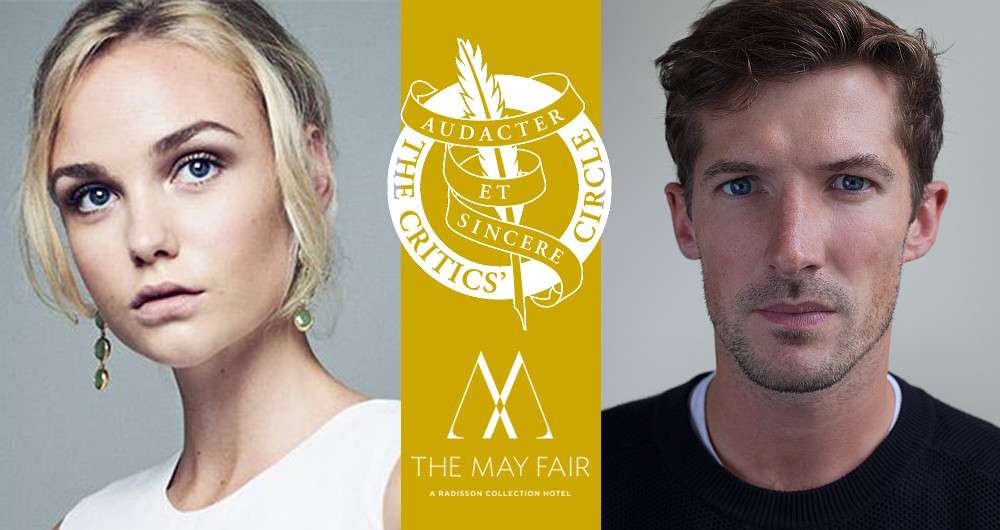 Nominations for the 42nd London Critics’ Circle Film Awards will be announced on Thursday 16th December at a small in-person event at The May Fair Hotel.

British actors Joanna Vanderham and Gwilym Lee will announce the nominations for the 42nd London Critics’ Circle Film Awards at a lunchtime event on Thursday 16th December. The critics are currently casting their nominations, with all films released in a UK cinema and direct to premiere streaming services between February 2021 and February 2022 eligible to be nominated. The small announcement event will be held according to current government pandemic guidelines.

Joanna Vanderham was cast in her first leading role while still at drama school, playing Cathy in the 2011 six-part thriller The Runaway, opposite Jack O’Connell. She was nominated for an International Emmy Award for her performance. Over the past decade, she has had key roles in other series (including DC’s Legends of Tomorrow, Stephen Poliakoff’s Dancing on the Edge and Jimmy McGovern’s Banished) and in movies (as the young female lead in What Masie Knew and opposite Vanessa Redgrave in The Go-Between). Vanderham can currently be seen in the series Crime, based on the Irvine Welsh novel, and will next star in the BBC miniseries The Control Room.

Gwilym Lee is perhaps best known for playing Brian May in the Oscar-winning film Bohemian Rhapsody, and he can currently be seen in the second season of The Great, in which he reprises his role as Grigor opposite Elle Fanning and Nicholas Hoult. Lee also starred in the drama Jamestown alongside Jason Flemyng, The Last Witness with Michael Gambon and A Song for Jenny opposite Emily Watson. He also had a recurring role in Midsomer Murders from 2013 until the series finale in 2016, and has garnered critical acclaim for his continuing work on stage.Since the first edition in 1980, the star-studded Critics’ Circle Film Awards have become an anticipated and respected event in the annual film calendar. In recent years special guests have included Olivia Colman, Timothée Chalamet, Florence Pugh, Dafne Keen, Carey Mulligan, Isabelle Huppert, Michael Fassbender, Emma Thompson, Hugh Grant, Cate Blanchett, Christoph Waltz and Pedro Almodóvar.

Rich Cline, chair of the Critics’ Circle Film Section, commented: “Our awards stand out from the crowd because they are chosen by people who watch nearly all of the films released in Britain every year, and this year we have again had to widen our eligibility rules due to the impact of the pandemic on the film industry. So our nominations are likely to look unlike any others. The Critics’ Circle Film Awards is an integral part of the annual awards-season conversation and has consistently highlighted film achievements that may be overlooked by other groups. I am also delighted that The May Fair Hotel is working with us for a 10th year.”

The winners of the 42nd London Critics’ Circle Film Awards will be announced at The May Fair Hotel on Sunday, 6th February. The awards are voted on by the 180-member Film Section of the Critics’ Circle, the UK’s longest-standing and most prestigious critics’ organisation.