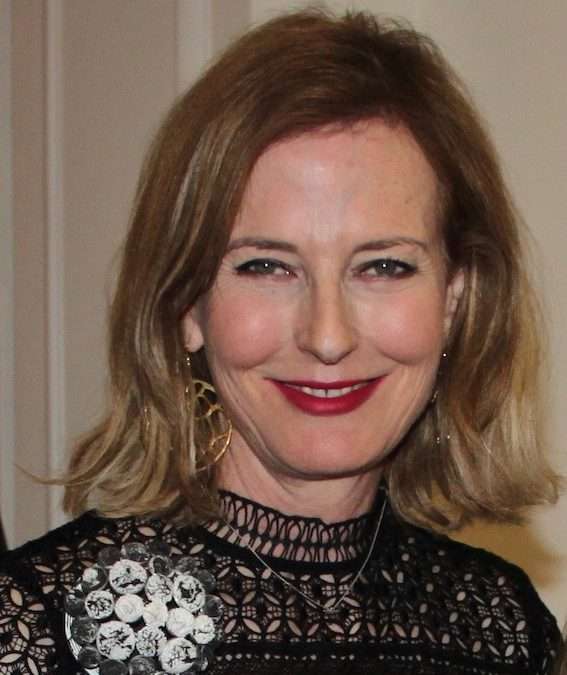 “We were delighted to make this Award to Dame Julia Peyton-Jones,” said Corinne Julius, Chair of the Circle’s Visual Arts & Architecture Section. “During her time at the Serpentine she made not only fine art, accessible to the public, but also photography and architecture.  She created a stimulating environment that covered all the visual arts, as do our members. Dame Julia made the Serpentine into an arts centre in itself. A rather continental place in a very English setting. Julia Peyton-Jones’s ethos was “to think the unthinkable”, but then make it happen. She increased annual visitor numbers from 250,000 to 1.2m by introducing the public to the likes of Jeff Koons, Marina Abramovic, Gerhard Richter, Paula Rego, Ai Wei-Wei, Yoko Ono, Man Ray and Jean-Michel Basquiat, and in 1995 famously unveiled a sleeping Tilda Swinton in a glass box as part of Cornelia Parker’s piece, The Maybe I – and all the time keeping admission free. She has been a preeminent patron and fund raiser. Her innovative annual pavilion project, exposed the public to outstanding architecture in an informal way; with architects like Zaha Hadid, Heurzon & De Mueuron and Oscar Niemeyer, creating their first buildings in Britain.  She was one of the first to understand that the public crave experiences, which she provided in spades.”

Dame Julia Peyton-Jones became a curator at the Hayward Gallery in 1988, and three years later director of the former tea pavilion in Hyde Park which had become the Serpentine Gallery in 1970. Under her guidance the gallery became an increasingly potent force in contemporary art, and in 1998 she refurbished it. In 2013 she took over the former gunpowder store across the bridge over the Serpentine and commissioned Zaha Hadid to turn it into the Serpentine Sackler Gallery. She left the Serpentine last year, having been created a Dame of the British Empire in the Birthday Honours list, and is now part of the Galerie Thaddeus Ropac team in Europe

Dame Julia said. “I am deeply honoured to accept this Critics’ Circle Visual Arts & Architecture Award, following in the footsteps of some highly distinguished previous recipients, and wish to say thank you to those members who voted for me. I am very proud of the work I have achieved in my career and to be recognised in this manner is hugely important to me as I embark on the next stage of my professional life.”

The Visual Arts section has a policy of encouraging recent graduates and each year selects an appropriate maker of the Award, with the recipient in mind. This year the Award is made by jeweller Adrienn Pesti, who has created a brooch, rather like a pavilion, in recognition of Dame Julia’s pavilion programme at the Serpentine Galleries, which has helped make architecture accessible to all.

The second award is in memory of eminent critic, the late Denise Silvester-Carr. The Critics Circle Visual Arts and Architecture Denise Silvester-Carr Unsung Hero Award, was made to Dr Fred Hohler for his work in establishing The Public Catalogue Foundation, (now ART UK,) an astonishing archive of all 212,000 of the nation’s paintings. It provides images and basic information on every painting in public hands whether on display or stowed away in a cupboard. Compiled county by county, it began in 2004 and was completed in 2016 with the 86th volume. Amazingly 80% of the paintings by some 40,000 artists held in 3,200 locations are either hidden away in storerooms or displayed in out of the way locations.  Many have never before been reliably catalogued or properly attributed.  The PCF has no equivalent anywhere in the world.

“The PCF was the brainchild of one man, Dr Fred Hohler a former city banker and diplomat who saw a gaping hole in the public understanding of what pictures it owned. Fred Hohler’s solution, has created for painting what Pevsner’s, ‘The Buildings of England,’ is to architecture: an unparalleled survey of the oil paintings in national ownership. It seems extraordinary that it didn’t exist before; its whole point seems now so obvious for its absence to seem equally unthinkable. Fred Hohler was a man on a mission with an almost impossible Utopian dream,” said Corinne Julius.

Despite good wishes in principle, Fred Hohler received no practical institutional support. He campaigned and cajoled, finding patrons as the project rolled out, county by county, collection by collection. He raised over £6m to document with images and details, every painting (in oil, tempera or acrylic) in public ownership throughout the United Kingdom: be it in National Trust properties, town halls, libraries, hospitals, galleries or museums. (Only a couple of major institutions with their own complete catalogues are excluded.)  5 years into the project realising the importance of internet access the PCF created a partnership with the BBC to put the catalogues online, which became the website; Your Paintings.

“It is an heroic achievement and one which we in the Visual Arts & Architecture Section of Critics’ Circle feel has had almost no public recognition. We are delighted to be the first to publically honour him.” Fred Hohler, commented. “Of course, it’s a terrific honour to be noticed, let alone be given an award for doing something that, quite honestly, was more fun than you can imagine. But I’m so pleased to receive the Critics’ Choice award that I’ve decided to do something even bigger and even better, to see if I can win the award a second time round.”