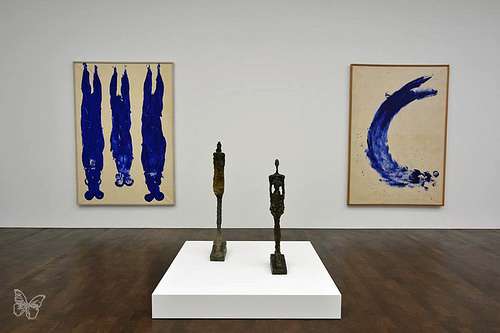 At a certain level, for those major commercial galleries located in London’s ever flashier and more expensive West End, things are getting grander and grander. Their aspirations now are contradictorily twofold: to be regarded as quasi-museums, pretty much on a level with official institutions, yet at the same time to attract the kind of excited public to their openings you might get at some semi-secret, strictly-word-of-mouth rock concert.

I turned up at the evening PV for Gagosian’s Giacometti-plus-Yves Klein show to find a huge queue of mostly youthful devotees struggling to get in. So I turned tail, and returned next day, to perfect who-do-you-think-you-are-daring-to-pass-these-doors, establishment peace and quiet.

After quitting Gagosian in Grosvenor Hill, I went the same night to the Keith Coventry PV at Pace Gallery’s equally vast premises in Burlington Gardens, to encounter a mob very nearly as big as the one I found at Gagosian. On both of these evening occasions, the art on display seemed to be playing a very secondary role to frantic socializing.

The Keith Coventry exhibition seemed to me a perfect example of the current uneasy marriage between art-as-big business and would-be avant-gardism. As the gallery press release puts it:

“In White Black Gold, Coventry continues his multi-decade exploration of the relationship between Modernism and its manifestations in the contemporary. In the exhibition-comprised of two new bodies of work and a monumental bronze – Coventry disabuses Modernism of its utopian promise, locating its residue in the debris of the social landscape.”

This description could in fact be put in a completely different and rather less flattering way. Any radical element in the work had been carefully weeded out. Apart from one enormous bronze sculpture, modeled after a bombed-out storefront, and spanning a whole wall of the main gallery space, the rest of the show consists of flawlessly elegant reliefs, either in pure white or in gold, derived (though you’d never guess unless you were told) from the ubiquitous McDonald’s golden arches logo, or else from hamburger wrappers used by the same firm. Many works from this McDonald’s series are defensively entitled Pure Junk. It depends, I suppose, where you choose to put the stress – on the adjective or on the noun.

The ruined storefront arouses memories of recent photographs of Homs and Aleppo, but it’s an ersatz, safely sanitized version of the cityscape of war. You can safely hold a party for a crowd of chattering would-be-hip art aficionados in front of it.

Coventry’s works inspired by McDonald’s are a savvy blend of late-period Pop Art and the kind of elitist, too-pure-and-refined-for- the-plebs kind of abstraction that was a recurrent theme in the now quite distant years of High Modernism. If you do in fact recognize their derivation from images emblematic of McDonald’s (nourishment for the impoverished and/or the incurably naff), you can comfort yourself with the thought that you would never sink your gnashers into one of their hamburgers yourself. Your expensive dental hygienist would never allow it.

The situation with the Gagosian show is a little different. Giacometti and Yves Klein are recognized Modernist classics, part of the effort made by the Paris art world during the early post-war period to push back against the ever-rising tide of American influence in the visual arts. It’s ironic that they are being celebrated by the most powerful of all American commercial galleries, now a worldwide franchise, but originally based in Los Angeles, not New York. Indeed, one might compare Gagosian’s current ubiquity to that of other iconic and quintessentially American brands, MacDonald’s prominent among them.

The current show is entitled Alberto Giacometti/Yves Klein: In Search of he Absolute. What the two artists have in common, according to the curator of the exhibition, Joachim Pissarro, is a kind of uncompromising intellectuality, which unites them despite the fact that they were of different generations. Giacometti was born in 1901, and died in 1966. Klein was born in 1928, and died in 1962. Speaking of the show, in an interview available on the gallery web-site, Pissarro rattles off a whole list of names of leading French intellectuals – Sartre, Simone de Beauvoir, Jean Genet, Merleau-Ponty – all of whom were Giacometti’s friends. Yves Klein was scarcely less well connected.

The Gagosian space, very big in itself, has been spaciously hung. The presentation does its best to dissipate the idea that the world the two artists inhabited, that of Paris post-World War II, was at this time inexorably losing its credibility as a centre for artistic and intellectual innovation. It had become, after the shock and shame of the war years, a pretty claustrophobic, self-regarding sort of place.

The show, in any case, doesn’t have anything like the impact of the recent National Portrait Gallery show devoted solely to Giacometti’s portraits. Some of the Giacometti figurines here are so tiny, it makes one think that some of the undistinguished little antiquities currently available on Ebay – provincial Roman-British bronzes and the like – would probably be a better buy. If you want a dinky little sculpture to put under a lamp, go there. The bill will be infinitely smaller, and the pleasure quotient – looking and possessing – will probably, in the long run, be about the same.

Particularly revealing, in this context, is the array of teensy Yves Klein monochrome paintings that occupy one wall of the joint exhibition. They lead one to reflect on the way that monochromes of this sort, though usually a bit bigger, became a staple of Modernist art. They recur throughout the history of the Modern Movement, from Malevich onwards. There are even one or two in Tate Britain’s current show of British Conceptual Art from the1960s and 1970s. It’s hard not to see them as being a kind of unintended, maybe wholly unconscious, confession of impotence: “I have nothing to say and I am saying it.” For the proud collector, aware of who made them, they are, however, an assertion of art world savvy and exquisitely refined taste.

When there’s so much money around for art, the oogle-oogle bird has a distressing tendency to try to fly up its own ass-hole. Even if that wasn’t to original intention of the person who made the work on show, presentations in grandee galleries do tend to give that impression. The basic message is: “Money talks, baby. Dissenters aren’t welcome to challenge what it says.”