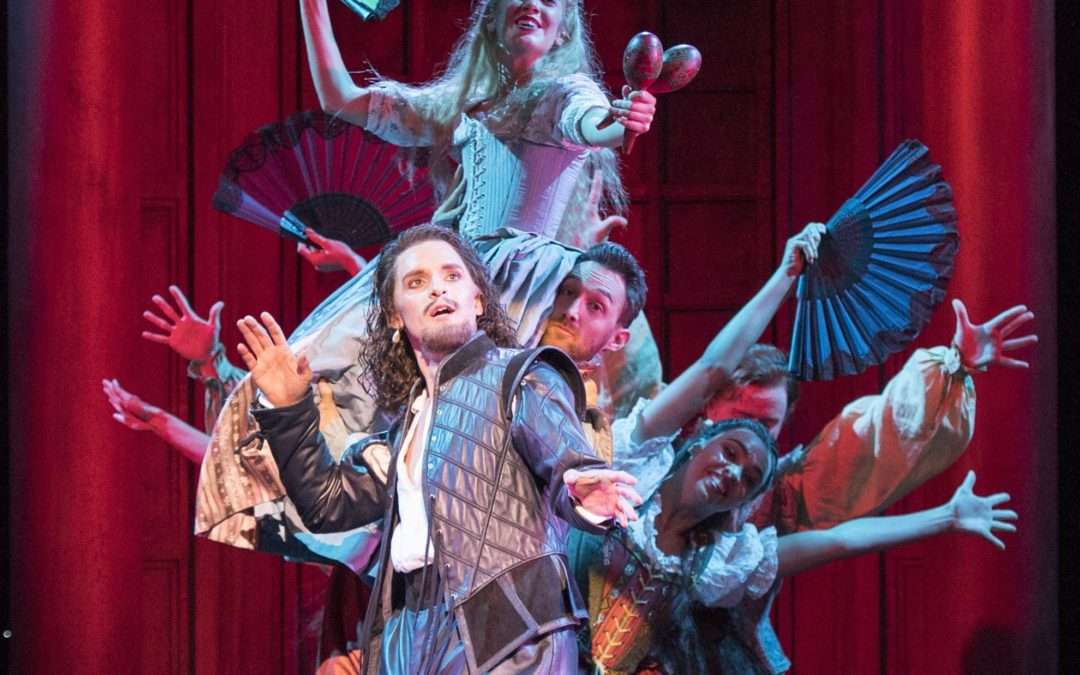 Opera companies run a big risk putting on musicals: the shows usually turn out way more slick and well-executed (we’ll leave aside some of ENO’s excursions into the repertoire), as well as more fun, than most opera productions. I’m not sure how Welsh National Opera’s ticket sales on tour worked out, but given a choice between an iffy Macbeth, the slim pickings of André Tchaikovsky’s Merchant of Venice and Cole Porter’s fabulous theatrical comedy, I know which I’d go for.

Jo Davies has directed brilliant stagings of Ruddigore, Carousel and this (in 2015) for Opera North: WNO took the show on pretty much wholesale, with much of the same cast; and many towns have now got to see a show that is great propaganda for how to do musicals right, with proper voices and a proper orchestra, rather than the gimcrack trash of most West End shows.

Sure, it’s a bit less athletic than an echt Broadway production, but there’s enough high-energy movement and hoofing in Will Tuckett’s choreography for anyone, the big production numbers like ‘Too darn hot’ are endlessly inventive, and the actual opera singers in the cast have far more physical fluency and grace than we have any right to expect. Colin Richmond’s backstage sets turn magically into Padua, with curtains based on mediaeval tapestries framing the stage. The brilliant conceit of Fred and Lilli’s marital rows spilling onto the stage is brought to life with sleight of hand and enormous pizazz. If one thing’s missing – and it’s not the longest suit of the show’s book by Sam and Bella Spewack – it is subtlety; Porter may not have been a sentimentalist but his music still brings a heart to the show.

The show takes enormous joy (like 42nd Street) in the whole theatre ethos right from the start, as the whole company launches into ‘Another op’nin’, another show’ – and instantly there are musical corners and colours you’ve never heard before, with David Charles Abell’s edition of the score restoring Porter’s original orchestration – a deal of clarinet, sax, brass and fun percussion played with disciplined verve by Gareth Jones’s orchestra.

Nobody could argue that the added plot (pseudonymous IOU, those gangsters, the Lois/Bill romance, the predictable Fred and Lilli story) is particularly sophisticated or original, but there’s such pace and panache you barely notice – plus a bit of Shakespeare, of course. Just as well Porter wrote Lilli’s spitfire number ‘I hate men’ to balance the unfashionable attitudes of Shakespeare’s Shrew, but the musical wit and enjoyment (and variety) gets better all the way through, even if the plot kind of stalls at the interval.

Jeni Bern and Quirijn de Lang – both genuine opera singers with thriving careers – have been performing their double-act from the beginning, and there’s a cosy kind of married feel to their shtick that’s very believable, and touching at times: when Lilli sings ‘So in love’ and Fred appears “onstage” through a gap in the scenery (a very neat Jo Davies moment), and when Fred reprises it later. But yes, the show’s heart is in its dirty, driving, sweaty ensemble numbers (Landi Oshinowo’s Hattie rips the place up in ‘Too darn hot’), the exuberant dances (Alan Burkitt’s extended tap routine as Bill), and brassy songs like Lois’s ‘Always true to you’ – marvellously delivered by Amelia Adams-Pearce with an endless variety of action, accents, movement and spirit.

I guess those gunmen are the Spewacks’ greatest gift to the world, and were performed with deadpan expertise by Joe Shovelton and John Savournin (again, the original pairing) – real comedy class, and bringing new degrees of force to their injunction to ‘Brush up your Shakespeare’. I couldn’t have had a nicer time.