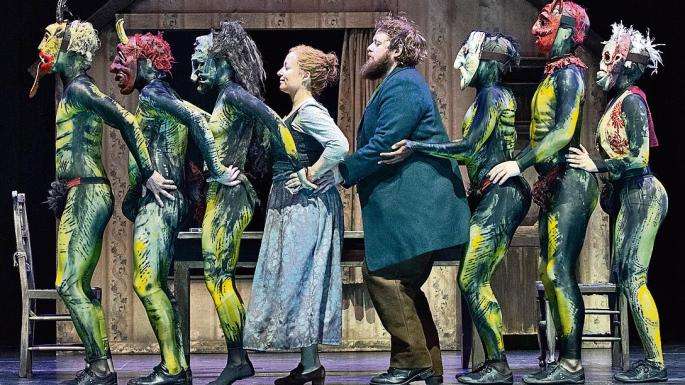 All Berlioz’s few operas are highly original in structure and intention – a characteristic encouraged by this brilliant composer’s obsession with Shakespeare as a model alien in French culture. But his Damnation de Faust is not an opera, more like variations on a dramatic theme. If it is to be staged, as it often has been (and successfully too, for example by Terry Gilliam at English National Opera) it requires a distinctly helping hand.

The trouble with Richard Jones’s Glyndebourne Damnation is that it does not really make sense as Berlioz intended. Here is an obscure and pretentious interpretation which fails to dramatize the narrative, physically and visually, in any way that might bring it alive for the audience. Jones treats Faust as a case, and turns the stage into a sort of devilish courtroom or lecture-room where Christopher Purves’s lively professorial Méphistophélès can instruct crowds of appreciative student horned-demons at some hellish university.

What lecture topic? Jones, with extra lines culled from Goethe delivered by Purves in almost idiomatic spoken French, wants to concentrate on sin, delusion, lack of vision, or realism about probable outcomes, to satisfy us in the audience as well as demons listening and co-operating with bursts of activity on stage. So, all rather wilful and futile, without getting anywhere.

Surely, the title role in the Faust story is the academic who matters, and dramatizing Faust’s engagement with romantic ideas to relieve his terminal distaste for existence is the narrative dynamic which provides the work with its glow – rather than the so-dominating Mephisto Jones supplies. There is competition between Faust and Méphistophélès, but it is the former who gets the best tunes – not, for once, the devil.

Jones has long striven to deny audiences what he feels they lazily expect in operas and plays he is directing. But here a sort of stubborn disengagement with the sheer range of Berlioz’s imagination is significantly undermining and self-defeating; which is why Glyndebourne’s staging ends up feeling so frustrating and tedious. Berlioz’s world of Faust does not benefit from any reductionist approach. There is, one feels, richer imagination at work than Jones has accepted.

Hyemi Shin’s designs get nothing from the forward motion in music and story, and Andreas Fuchs has little to light. Sarah Fahie’s choreography for the will o’ the wisps (added after the faux conclusion as a seeming afterthought) is as uninteresting, repetitive and irrelevant as much else in the goings-on. Has Allan Clayton, bearded and getting plumper, ever seemed so devoid of charisma? – though perhaps that is intended by Jones. Clayton’s is a beautiful tenor voice used with effective musicality, but a Faust lacking personality this much is someone gone missing. Christopher Purves’s chief devil relishes his dominance, of course – and is real the star of the whole business.

But what relief one feels hearing the first female vocal notes when Julie Boulianne’s mezzo Marguerite arrives on the scene – though from the stalls her diction sounded less than ideally crisp. As Brander, Ashley Riches was distinctly under-used. Conductor Robin Ticciati’s delicate exploration of this wonderfully rich score was, alas, pretty much overcome by the dullness on stage.