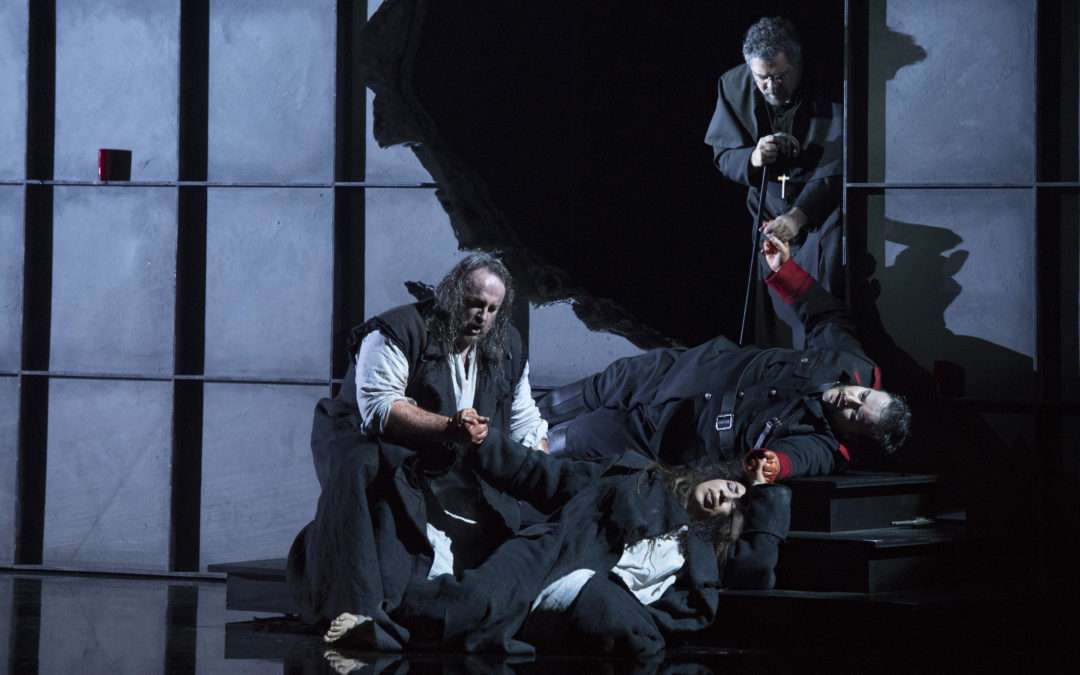 Say your prayers: Leonora and Carlo prepare to die, Alvaro keeps up the penitence. Photo by Richard Hubert Smith

The most startling aspect of WNO’s account of Verdi’s tale of doomed love is a wicked fairy. As though moonlighting from the Sleeping Beauty, Justina Gringyte participates in the overture beating her drum major-style mace on the ground in time to Verdi’s destino-knocks-at-the-door motif. The opera’s title incarnate, she returns at the end to round off proceedings. More than that, she doubles as Curra and Preziosilla in what turns out to be a variously garbed but unified character. Sexy but creepy, this was a good decision.

In a tale that makes Tess of the D’Urbervilles look light-hearted, the action proper opens with a couple about to elope. Their nuptial intentions have been blocked by her family because Don Alvaro (Gwyn Hughes Jones) is insufficiently noble and insufficiently Spanish. Part Inca, his royal blood is unacknowledged. This production makes him look faintly like Garibaldi; one can see the logic; perhaps wise that there was no follow-through with a poncho.

Mary Elizabeth Williams’s intensely-felt Leonora is getting cold feet about the midnight flit. Gringyte’s Curra, kitted as a maid, helps with the packing and manages to look as though she’s arranging matters. The bride’s father (Miklos Sebestyen) strides in to prevent the dash for the Spanish equivalent of Gretna Green; the hero (or foul ravisher to the bride’s family) nobly surrenders but in doing so his gun goes off, accidentally killing the old man.

In the confusion, the unhappy couple are unclear about one another’s fates, while an outraged Don Carlo (Luis Cansino) swears to avenge his dead father and dishonoured sister.

The couple live in separate penitence, she a troglodyte hermit, he in holy orders. Meantime her brother is on their trails. Amid a great deal of strenuous music, the concluding scene has Carlo fatally wounded in a duel in a duel with Alvaro (Gringyte provides the weapons) before shooting his sister and expiring.

Without question Mary Elizabeth Williams and Gwyn Hughes Jones dominate the evening, but the show is not theirs alone.

Donald Maxwell’s buffo Melitone draws laughs amid the gloom. A variation on Macbeth’s porter (the latter didn’t make the cut when Verdi set the Shakespearean play a decade and a half earlier), he complains about visitors, beggars and penitents. When he hands out food to the poor, Pountney has him try to requisition a young woman for his own libidinous purposes in a scene that has painful contemporary relevance.

An Italian opera set in Spain (and commissioned by Russia), the look of this show occasionally suggests we’re in a world of fascists and falangists. When the chorus gathers as muleteers, they are kitted out (costume designer: Marie-Jeanne Lecca) as though in sailor suits, while fortune-telling gypsy Preziosilla (Gringyte this time with the top-hat-and-tails look of a Bob Fosse routine) leads them in praising war. Cheery yet chilling, it is as though Leni Riefenstahl has seized HMS Pinafore. Gringyte’s performance is suitably shiny in costume, movement and vocal technique. The scenery’s graffito ‘viva la guerra!’ echoes Millán-Astray’s infamous cry of ‘viva la muerte!’.

When the chorus recur as the inmates of Leonora’s monastery, they are togged out with bishops’ mitres, crowns of thorns and designer bloodstains. 22 bishops in a monastery, do I hear you protest? Well, no stranger than a disguised Leonora choosing to hole up there rather than in a convent, I suppose.

The entre deux guerres world recurs in an expressionistic account of the scene with Trabuco the peddler (Alun Rhys-Jenkins) which is staged as a theatre show midway between commedia dell’arte and Punch and Judy.