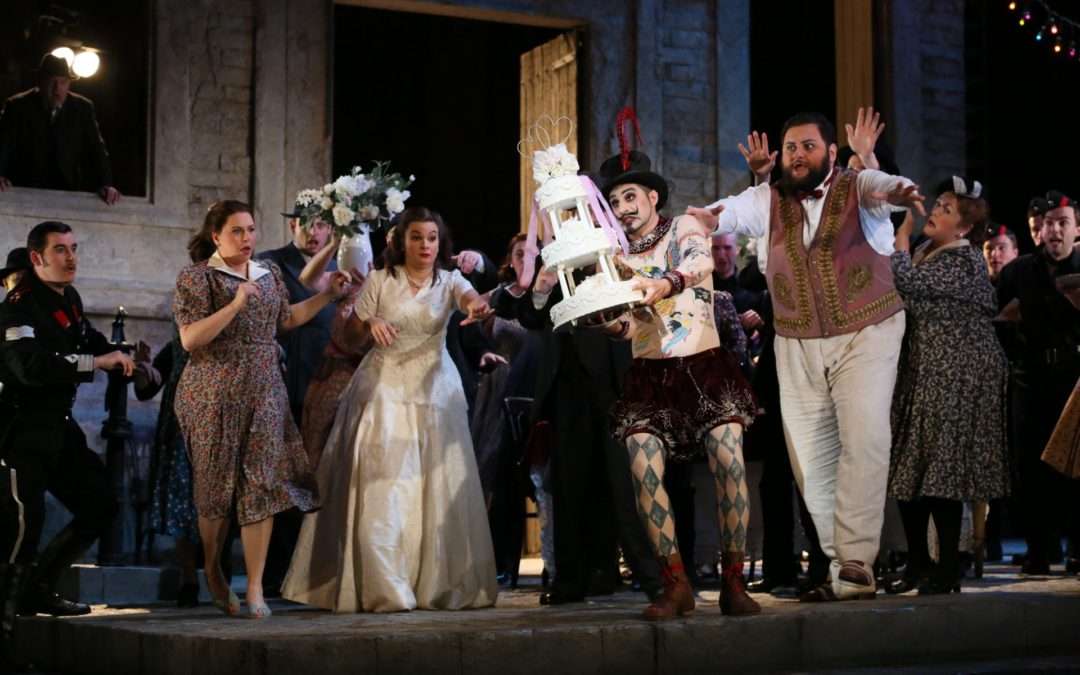 Having their cake: the cast of Glyndebourne's Elisir - photos by Donald Cooper

Pleasing crowds since 2007, Annabel Arden’s sunny production of Donizetti’s perfect sentimental comedy runs around the country on tour before returning to the main festival again next year. I guess it will run for ever, and why not? – really it’s an entirely likeable thing that more or less defies criticism. But anyway, here’s some…

Arden’s programme-note citing of Far from the Madding Crowd raises hopes of moral turmoil, devilry and a serious socio-political study of Adina’s equivocal position as the Bathsheba of the (probably) Tuscan farmstead where Arden and designer Lez Brotherstone set their tale, but it’s a bit of a blind. As is the set itself, its bracing and stage-lights averting us to the notion that we are on a film-set of the cheery Zeffirelli variety: this golden light is artificial, and that open space in front of the fattoria has no hinterland, just blackness. I’m not really sure what purpose this distancing serves except to emphasise the fairy-tale and excuse the off-the-peg peasant romps. And no, I’m not asking for full-on kitchen-sink realism either. But doing things in quotation marks in order to excuse idle clichés is a wee bit transparent.

The question with these well-oiled long-runners is how the new cast will slot in; whether they can make the show their own. Here, the answer is “up to a point”. Benedetta Torre’s Adina never really catches fire, not having the bouncy-bunny cheekiness of Danielle de Niese, or indeed any other identifiable characteristics. The tone is rather thin and thrill-free; perhaps there’s a hint of regret in ‘Chiedi all’aura’, as she outlines her fickleness to ardent Nemorino. And towards the end, when jealousy shakes her awake, her decorously liberated coloratura brings her half-alive for the audience, but really the journey this Adina makes is not so interesting.

The star is Nemorino, the marvellous Sehoon Moon, who will be reprising it at the festival. Here are all the torments of the spurned lover, plus a kind of moral sureness that Adina must find irritating as hell. Moon cuts a sweet and affecting figure, the dungareed electrician utterly in thrall to Adina, but utterly sure he’ll get her. He’s physically perfect for the part, and his singing is a dream – a real Italianate voice with real Italianate style, full of shading and emotion.

The other calling card of this show has always been Dulcamara’s mute sidekick, half-Mephisto, half-Fagin, capering around setting up situations like a frenetic, elfin director. Maxime Nourissat does it fabulously well, with the face of a sad clown, a grace and elegance of movement and an uncanny sense of control as he snaps his fingers to conjure up the resolving, forgiving night. His magic-lantern show advertising Dulcamara’s wares is a lot of fun, his assistance in the gondolier song kind of disturbing and brilliant at the same time.

And he’s a great prop for Misha Kiria’s bluff doctor, whose Goop-like remedies go down a bomb with these Forties peasants. And Matthew Durkan may have a bunch of black-shirted Fascist troops backing him up but he’s no predatory Sergeant Troy, and never seems likely to tear Adina away from her obvious destiny.

Ben Glassberg conducts with a lovely bouncy, light touch that could use a bit more variation of pace. The chorus is kept very nicely busy by choreographers Leah Hausman and Colm Seery. L’elisir, I guess, can seem a thin piece if you’re not attuned to Donizetti’s sentiment and deft, gossamer musical grace, but this is entirely satisfying, with just enough danger that things won’t work out, and more than enough charm to beguile many more audiences. Yes, this opera can certainly produce more of a thrill of liberation and joy than it does here, but Arden does quite enough to make us believe, for a moment, that this lovely fantasy is absolutely true.