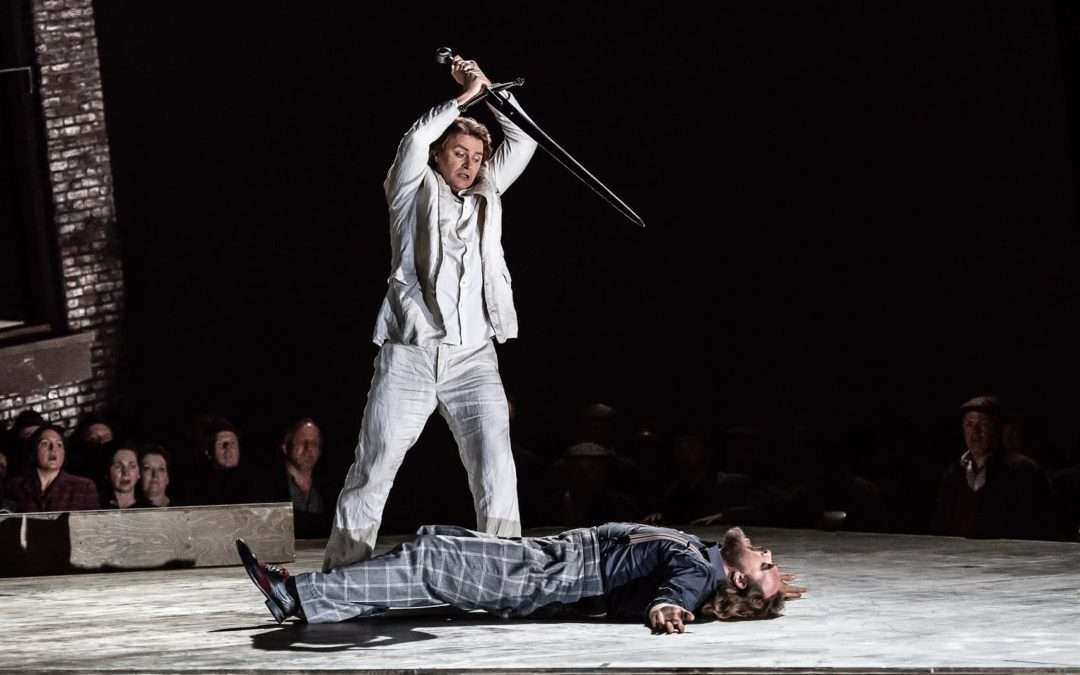 One of the first decisions in any opera production is the setting. For Wagner, the old-school approach was to tog up in faux Dark Age armour. The epoch-making Chéreau-Boulez centenary Bayreuth Ring was famously costumed for Wagner’s own times and industrialised the Rhine. In David Alden’s new production, the costumes (Gideon Davey) are 20th-century military, with lots of rifles about the place. Some may complain that this makes a nonsense of the necessary swords and spears in Wagnerian plots, but the briefest glance at a royal wedding, a State Opening of Parliament or a Trooping the Colour should be enough to put that to rest.

The set (Paul Steinberg) has gone for another opera favourite, with buildings set at angles that suggest a major insurance claim for subsidence is in the offing. These are turned around midway to show that they are indeed braced, suggesting something between bomb damage and a Potemkin village. As cast members frequently have to sing from windows in these challenging locations, I assume the ROH health and safety officer has had a tachycardic few weeks.

Jennifer Davis as the accused Elsa von Brabant and Christine Goerke as her nemesis Ortrud are the show’s stars. They sing with power and authority, both separately and together, befitting rival claimants to the empty throne of Brabant.

The orchestra’s performance under Andris Nelsons also does power and authority when required, but in addition it manages a transcendent lightness of touch as in the work’s opening. This is, by the way, a geographically complex evening for instrumentalists, as fanfares come at us from all directions.

George Zeppenfeld is a surprisingly tortured Heinrich der Vogler. As king, he’s the evening’s biggest cheese, yet he slouches in his throne, leans against walls, sits and then lies on the floor. Perhaps the conceit is that he is tired and emotional following protracted wars with the Hungarians, of whose pagan menace he has arrived to warn.

By contrast Thomas J. Mayer’s Friedrich von Telramund is a thorough-going war hero and a roaring baritone. He and Goerke are the Macbeths of this tale, and manage to be both powerful and doomed. Singing while bonking used to be an ENO hallmark, but these two have been directed to smooch while plotting. This contrasts their sensual darkness with the clean-living Elsa and the knight of the swan, who are put to bed in white clothes, with white sheets in a white room. The direction does however add to the number of people who have to sing while unnecessarily supine.

Klaus Florian Vogt doesn’t sing mezzo-piano head-voice throughout – it just feels like that. This may be intended to be the vocal equivalent of his white suit, but it leaves Vogt sounding like a milksop. Someone needs to remind him and Nelsons that here is a Christian knight, not a cathedral chorister. As his father’s chum Galahad puts it: “My strength is as the strength of ten/Because my heart is pure”.

The fight with Telramund is less dramatic than the 1997 meeting of equally white-suited Martin Bell with the Hamiltons. Mayer swings a two-handed sword; Vogt defeats him by raising one hand as though halting traffic and takes the sword away from him. Our school playgrounds see more dangerous fighting than this. Meanwhile Kostas Smoriginas’s brooding mutilé de guerre Herald is a reminder of what swordplay does to you.

Great singing, great playing, but the surely the budget could have been stretched to pay for one more sword?