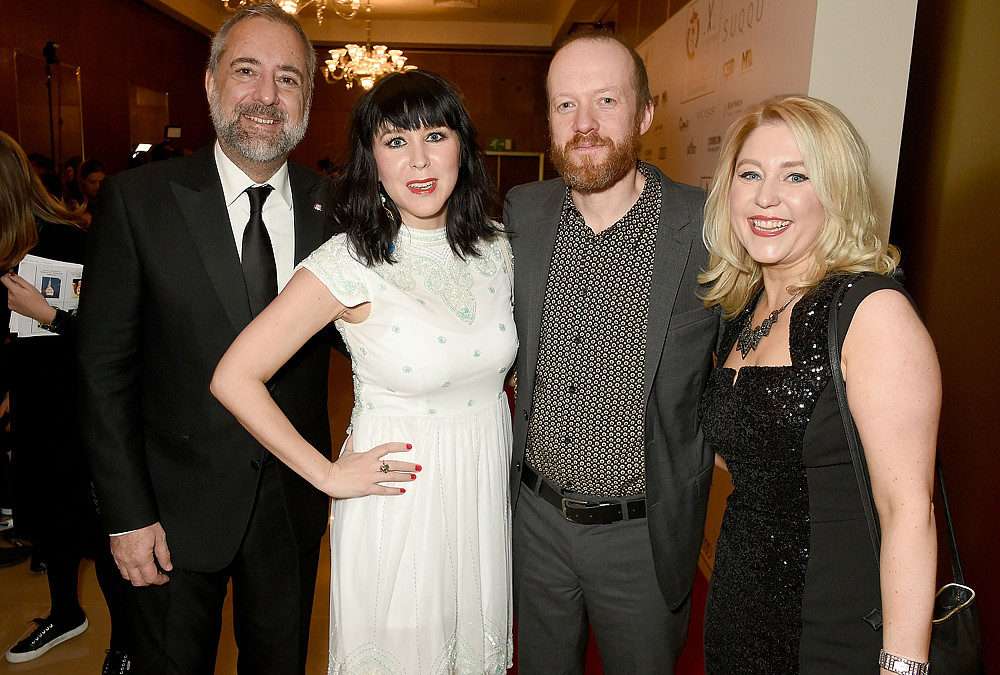 ALICE LOWE AND STEVE ORAM TO HOST CEREMONY FOR THIRD TIME AT THE MAY FAIR HOTEL, SPONSORED BY SACRED, VOSS AND REMY MARTIN

Britain’s leading film critics today announced that filmmakers Alice Lowe and Steve Oram will return as hosts of the 38th London Critics’ Circle Film Awards, which will take place on Sunday 28 January 2018 at The May Fair Hotel. The event is expected to attract a host of stellar British and international film talent. The awards are presented by the 145-member Film Section of The Critics’ Circle, the UK’s longest-standing and most prestigious critical organisation.

“It’s great to be back as hosts again,” says Oram. “It’s always a fun and friendly night, and a brilliant celebration of film. Can’t wait!” This past year, Oram appeared in the British films A Dark Song and Brakes, and is now in production on Deadfolk, his second project as director. Lowe appeared this year in acclaimed British drama The Ghoul and released her directing debut Prevenge.

Returning sponsor Sacred Gin will offer its special cocktails at the after party. Guests can also enjoy Rémy Grand Tonics, created by Rémy Martin, which is also the exclusive supplier to the Cannes Film Festival. Voss will provide water to keep everyone well hydrated. And talent agencies Millbank and Cooper Searle are sponsoring the event as well as bringing a collection of rising stars to the red carpet.

Rich Cline, chair of the Critics’ Circle Film Awards, comments: “Our awards stand out from the crowd because they are chosen by people who watch all of the films released in Britain every year. The ceremony is an integral part of the annual awards-season conversation and has consistently highlighted film achievements that may be overlooked by other groups. I am also delighted that we’re returning to the intimate, five-star glamour of The May Fair Hotel for a sixth year. The team there has been integral to our event, and we look forward to working with them to put on another great evening.”

Inderneel Singh, The May Fair Hotel’s Managing Director, says: “We’re excited to welcome back our friends from the Critics’ Circle Film Awards for the sixth year running. The Critics’ Circle Film Awards kick off the awards season and are often seen as a notable precursor to the other major awards that follow. They are the perfect match for the dynamic style of The May Fair Hotel and we can’t wait to welcome the best of the worldwide film industry’s talent to the hotel in January.”

Films are eligible for the 38th London Critics’ Circle Film Awards if they are released in UK cinemas between 10 February 2017 and 16 February 2018 and screened for the press.

About The Critics’ Circle:
Established in 1913, The Critics’ Circle is the oldest organisation of its kind in the world, with more than 400 members who work in the UK media as critics of drama, art and architecture, music, film and dance. Chaired by Anna Smith, who also currently serves as the Circle’s President, the Film Section membership is made up of more than 145 UK film critics, broadcasters and writers, including Guardian critic Peter Bradshaw, the BBC’s Mark Kermode and Metro’s Larushka Ivan-Zadeh, and has presented its awards annually since 1980. www.criticscircle.org.uk

About The May Fair Hotel:
The luxury May Fair Hotel, opened by King George V in 1927 and owned and operated by Edwardian Group London, is located in the heart of London and boasts over 400 luxury bedrooms, including 40 of the capital’s most memorable signature suites. The residence encapsulates its Mayfair locality throughout, with the meat and seafood restaurant, May Fair Kitchen; The May Fair Bar; the May Fair Terrace and the relaxing May Fair Spa. The May Fair Hotel has an established partnership as the official hotel partner for both London Fashion Week and the BFI London Film Festival. www.themayfairhotel.co.uk