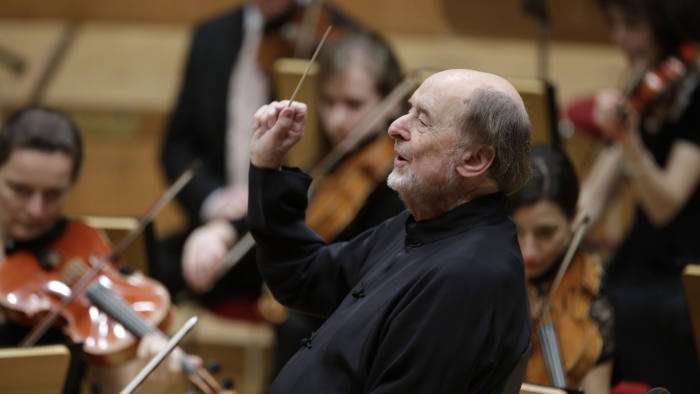 “The isle is full of noises, sounds and sweet airs” is what Shakespeare actually wrote in The Tempest with reference to the magical island of the play’s setting, although of course it was always taken as Britannia. Perhaps there will be a tariff to pay on European music after March. If so the London Philharmonic Orchestra has acted pragmatically in making 2019 a year of British music. This opening concert had the great symphony orchestra downsizing to Baroque proportions for Britain’s seminal contribution to the new art form of opera in 1689 with Henry Purcell’s and Nahum Tate’s Dido and Aeneas, probably written for a Chelsea girls’ school. Although scholars now think it may have been written earlier, its brevity at less than an hour, its humour and the fact that all but one of the parts is female make the school tradition compelling.

The LPO is the pit orchestra at Glyndebourne every summer so opera is in the genes although they usually hand over anything pre-19th century to Early Music specialists. However, here at their Royal Festival Hall home, the modern strings grouped themselves around a continuo section of harpsichord and two theorbos (long-necked lutes) and made plausible expression of the elastic phrasing and courtly trills. The absence of gut tone was compensated by William Devine’s sparkling keyboard and Jakob Lindberg’s and Jorgen Skogmo’s evocative, improvisatory and nimble theorbo playing.

The conductor Sir Roger Norrington swivelled on a swivel chair and led proceedings more through his genial charisma and octogenarian authority than the mathematical precision of the beat. At Glyndebourne he faces the cast, but here in this semi-staging he had his back to them, so there was a slight tempo disagreement when the mezzo Marie-Claude Chappuis began Dido’s Lament more slowly than Norrington was conducting. She has quite a heavy voice with a metallic core appropriate for a tragic role, but her determination to do justice to grief in this famous aria meant she pushed a little sharp in the ‘remember me’ passages.

Her haughty dismissal of baritone Benjamin Appl’s nice-but-dim Aeneas made a powerful turning point. Appl’s heroic stance and fruity bass turned to whimpering impotence at the realisation that military duty had no appeal for the godlike queen. In the original production, perhaps, he was an import from the local boys’ school, which will have amused the girls especially in his recitative chat-up. The production also took the option of a male voice for the Sorceress, and bass-baritone Edward Grint made much of the comedy. He was ably abetted by the mellifluously cackling, lightly dancing witches Martha McLorinan and Anna Harvey.

Soprano Lucy Crowe sang Dido’s handmaid Belinda with a brilliance that threatened sometimes to outshine the Queen. She sang her advice to submit to Aeneas like a sensible secretary with vocal ornaments tidy as paper clips. Fanned out behind the orchestra and gazing in on the action was the Schütz Choir, which Norrington himself founded 60 years ago, and which sang with a light touch both in their sorrowing foreknowledge and their laughing immediacy.

The opera filled only the second half of the concert. In the first half we heard two Water Music suites written by Handel for performance at royal boating parties on the River Thames in the first years of the reign of King George I, freshly arrived in 1714 from Hanover in Germany. Many Europeans made livelihoods in London which was boom city in the decades after the Great Fire with wealth pouring in as the trading empire expanded round the world. Georg Friedrich Händel anglicised his name and stayed like the royal family. His music, from the perspective of a foreigner, reflected a scale of stately grandeur which Purcell’s more intimate and personal royal music rarely has. On came pairs of oboes, horns and trumpets. To the back went the continuo section, who would one day disappear completely. The movements veered between fast and slow French, Italian and English dances. Norrington conducted with elfin gaiety and the players responded with playing that was lively, expressive, radiant and idiomatic, especially in the horns’ amusingly watery, bubble-bath tone. The mood was carefree and affairs of state, which the music was designed to alleviate, seemed for a few blessed minutes, entirely absent.