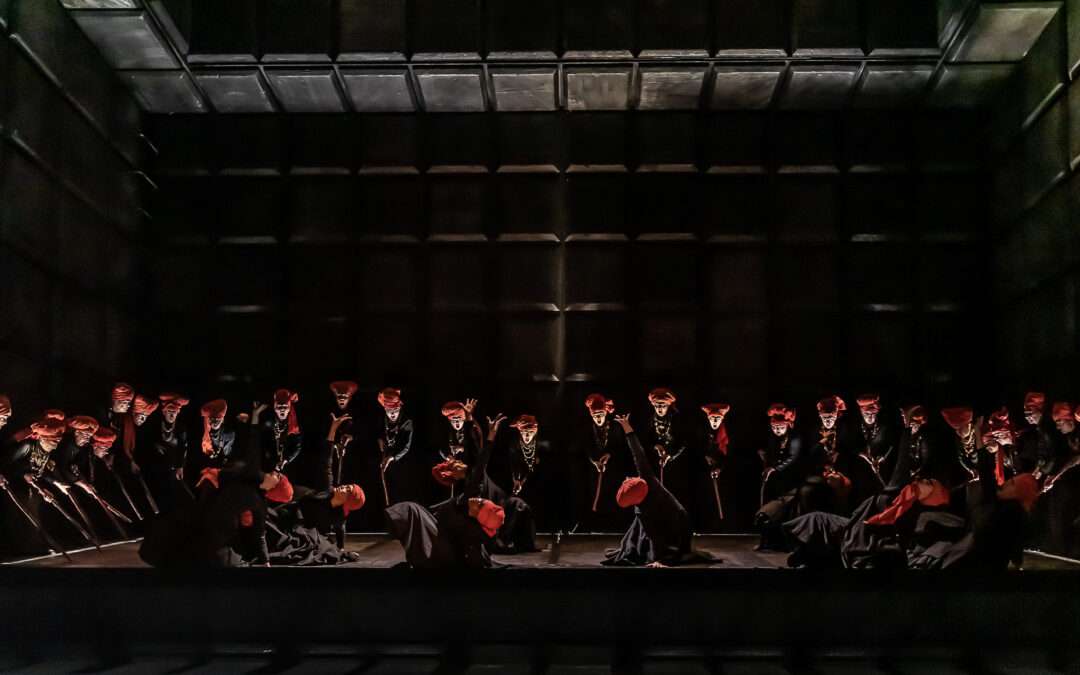 How do you turn a Hammer horror into a tragedy? It confronts every director of Verdi’s take on Shakespeare. Part of it is that the mid-19th century had such different ideas of drama (and of Shakespeare) from us, another that Verdi (and his librettist Piave) knew the play only from a genuinely debased and wayward prose translation. The music certainly has tragic grandeur, beautiful dark, sad colouring alongside the weird jauntiness of the witches and oompah accompaniments. But the demands of Italian opera in 1847 and the headlong rush of the drama mean that we have to take a lot on trust as concerns the Macbeths’ murder of their moral selves, which presumably is the real tragedy of the piece.

Phyllida Lloyd’s 2002 production has served Covent Garden well over several revivals, and depends heavily on the quality of the cast for its effect. Simon Keenlyside sang in the 2011 run-out, and with his lieder-singer’s voice has a better chance than most of persuading us that Macbeth is more than a simple villain. The trouble is that we’ve hardly met the chap before he starts killing people, and it is only later, in his aria ‘Pietà, rispetto, onore’, when it’s frankly a bit late, that he starts asking what he might have lost on the way. But Keenlyside is always a pleasure to watch, a quicksilver stage creature, and his Macbeth is never less than fascinating. It has changed over the last ten years, too: back then, Keenlyside felt more questing Hamlet than bullish Mac. Now the voice has darkened and the hero suffers less infirmity of purpose. In the end it’s a really tough role and you’d be better off forgetting Shakespeare completely (big ask for an English singer and staging of course) and simply wallow in the blood. There really isn’t much room for nuance in this Verdi: that would develop in his work a few years later.

Anna Pirozzi is his Lady, a big rather blunt voice and Route One acting, and – with memories of Anna Netrebko in the role here in 2018 – high expectations to fulfil. It’s not enormously subtle but it is effective, capturing the Lady’s more-witchy-than-the-witches mania, and, in the sleep-walking scene, the sad vulnerable woman buried beneath, and there are some wonderfully fruity, curdling notes to chill the blood. What happened to her? Phyllida Lloyd decides on a chilly marriage (she sings her first cabaletta looking with regretful ardour at the marriage bed) and the mystery of the absent or dead Macbeth children, who appear in dreams before morphing into Macduff’s so the Macbeths can slit their throats. Sure, it’s a bit glib, but with 1840s opera you have to take what you can.

It has the kind of set we called simple in 2002, though it looks like the last word in luxury in these days of IKEA designs. Anthony Ward’s black-and-gold stage is cast in deep shadows – darkness made palpably solid – by Paule Constable’s lighting, dry ice billows and flows, uncanny apparitions their business effectively, choruses jerk about manically (witches), huddle in misery (dispossessed Scots) or engage in gloomily unfestive party routines. Günther Groissböck is a charismatic Banquo, David Junghoon Kim lacks a bit of tragic depth for Macduff, Egor Zhuravskii is promisingly forthright as Malcolm. The old thorny crown and gilded cage, Lloyd’s GCSE-level analyses of power, do their thing. Daniele Rustioni gets some fabulous noises out of the orchestra, deep brass, febrile high violins, the pace is headlong, and the chorus is in really top form, from the hushed horror of ‘Patria oppressa’ to the thunderous finales of the first two acts.

The audience greets this all with exceptional ardour, partly merited, and surely partly a result of the resolute grimness and austerity of most of the stuff that comes out of Covent Garden these days. It feels like old-time opera – in both good and not such good ways.