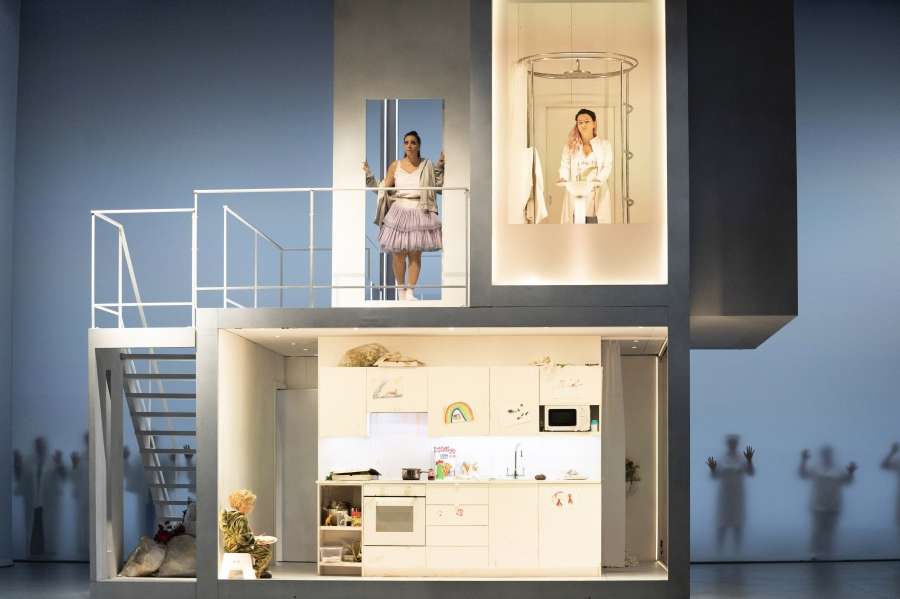 Puccini could almost have written Madama Butterfly after hearing an appeal at a conference on intersectionality for material to support a new module, with its tragic tale of a woman misused by a man, a confrontation between a more- and a less-developed country, cultural misunderstandings, inter-racial marriage, international surrogacy and adoption, and a 15-year-old being trafficked. The opera has accordingly been cited in numerous studies, and productions similarly often adopt a feminist or post-colonialist reading.

The setting is a large white-box stage, containing a two-storey white-box house, where the storeys are sufficiently out of alignment to create a balcony and an overhang. Such architecture seems to stem from that Modernism which owed something to a reading of Japanese houses, so is quite a neat choice. The ground floor has an all-white fitted kitchen and stacked white goods, a look which took suburbia by storm in the 1980s and never really went away. Onto this decontextualising locus are variously projected waves and butterflies, while the cast ascend, descend and circle it like an awkward topic in conversation. In addition, there are a lot of white clothes and some of the oddest, largest white wigs to be found anywhere outside the Old Bailey. (Isabella Bywater, designer; Ash J. Woodward, video designer; Eleanor Higgins, lighting designer; Denni Sayers, movement director.)

Everything is thus as squeaky clean as a too-bright washing-powder advertisement, and a long way from Titipu. There is also a marked emphasis on cleanliness, with the washing machine and tumble drier on the set, and the arrival and departure of people collecting the laundry.

In keeping with this contemporary setting, the paternal seppuku knife turns out to be a handgun; the suicide nevertheless takes place noiselessly out of sight in the bathroom, allowing the revolving house to reveal a bloodstained shower curtain; yet more intertextuality.

Not having been inside a theatre of any kind for nearly two years, there were unsurprisingly, various surprises. One was e-tickets (a test I failed). Another was exiting the car park by use of a QR code (failed again).

In the theatre, a big surprise is the bass end of the orchestra. Memory tends to hold the oboe and flute (and piccolo) lines. But how wonderfully Puccini uses his bassoons, trombones and the Wagnerian menace of his bass trombone, not to mention the pounding timpani that cinematically threaten to take over entirely as we move towards the despairing climax.

In addition, what a chamber opera this is! The wedding scene with the relatives (mocked by Pinkerton) is the nearest we get to the usual Romantic scene of the peasants’ chorus: no big choral numbers and only two or three people on stage at a time. This isn’t Carmen – more Turn of the Screw.

Carlo Rizzi guides the orchestra easily from the tragic storm-surge tuttis to the light sprinkling accompaniment of the eponymous heroine that underlined her isolation.

Leonardo Caimi’s Pinkerton is pleased with himself, breezily slouching and manspreading. He’s no Don Giovanni: for one thing he’s a tenor, not a shady baritone, and Caimi does some effective sorry-for-himself tenor sobbing. Pinkerton is out of his emotional and cultural depth. He has no insight into Cho-Cho-San’s world: her relatives are funny; her ancestors are funny; she’s a toy and something out of a screen painting. Was this disquieting American at the back of Greene’s mind when creating Alden Pyle? Let’s not forget that the Schönberg-Boublil remake of Butterfly was set in Saigon.

Mark Stone manages to create a real character as the US consul with the thankless task of first issuing warnings Caimi cheerfully ignores and then carrying out the shallow lieutenant’s dirty work of evicting Cho-Cho-San so that he can move in with his new wife. But then he’s not a bass, so who cares what he says? Not like Keel Watson’s growling Bonze, whose edict sends Cho-Cho-San to a Japanese Coventry.

Tom Randle’s matchmaker Goro is another tenor failing to grasp the situation: with a good deal of polite handwringing and urging, he just doesn’t get Cho-Cho-San’s problem: he has a good offer for her, why won’t she take it? Then there’s Neil Balfour’s Prince Yamadori, the Roderigo of the tale, on hand with a bouquet but making no impression on the object of his affections.

The duets between Anna Harvey’s mezzo Suzuki and soprano Alexia Voulgaridou’s Cho-Cho-San (alternating performances with Joyce El-Khoury) are the highlight of the show. Their voices blend excellently. Harvey may be the servant, but in this production we are watching a tale of female friendship. Voulgaridou deserves additional praise not only for her intense solos, but also for coping with being togged up in a net and tulle skirt which seemed designed to be a cross between a bustle and a giant vulva.

They were joined latterly by Sabrina as the controversial infant, who paints flowers on the wall of the house while the mother gathers flowers from the garden. She stood on one leg during curtain calls and then hopped offstage instead of walking. Why don’t more performers do that?

Sophie Yelland came off the substitutes’ bench at the last minute to play Kate Pinkerton, and did all one can do with the position, given that it’s not a goal-scorer. She is a decent and pink mezzo, and the audience can only leave wondering what she sees in the nauseating Pinkerton, and what her future holds.