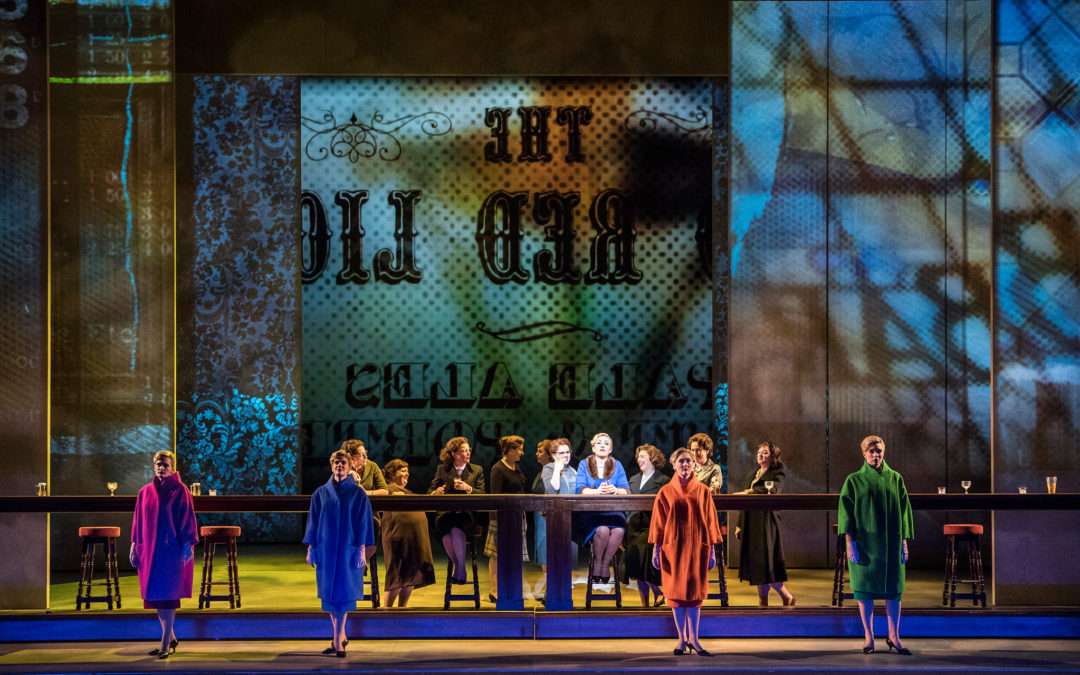 Unlike most of my colleagues, I liked, and was even a little moved by the world première of Nico Muhly’s Marnie by the English National Opera (it goes to the NY Metropolitan next year). I particularly relished Nicholas Wright’s libretto (despite about 15 minutes-worth of repetition, which could be cut to the piece’s benefit). The merits of Wright’s libretto include the good-old dramatic pleasures of suspense, peripeteia (reversals and change of fortune) and anagnorisis (discovery). I might be at an advantage here, because I haven’t seen the 1964 Hitchcock film probably since it came out, and can remember only two visual scenes – the ocean liner moored at the bottom of the road, and Tippi Hedren in the gravel drive of the grand house – and nothing of Bernard Herrmann’s score for the film. Muhly and Wright say they’ve gone back to the 1961 Winston Graham novel for inspiration and nuance.

In one obvious sense this is true. Hitchcock moved the location from 1959 Britain to the US, and Wright has restored the setting deliciously, with a chorus about British confectionery brand-names, another about drinks in a typical pub, and the recitation of a late ’50s/early ’60s British menu of “chicken Kiev and Black Forest gâteau”.

Think how seldom you witness a new opera where you actually want to know what happens next. Even the great Tom Adès’s recent works – The Tempest and The Exterminating Angel – depend more on the wit of the music (in the first) and of the libretto (in the second) than on the dramatic virtues. Kaija Saariaho’s L’amour de loin (2000) more or less has no plot; and though Harrison Birtwistle’s The Minotaur (2008) and John Adams’s Doctor Atomic (2005) make you worry a bit about the fate of the protagonist, you enjoy them mainly for non-dramatic reasons.

Marnie, however, keeps you guessing. Hitchcock was more optimistic than Graham, and Muhly and Wright have found a chilling middle way. It’s hard to love Marnie herself, but I was transfixed as she lied and stole her way, as Maggie, Martine and Mary, through Birmingham and most of the sizeable towns in Britain beginning with “B”. (Banbury, beware.) I did feel chemistry between her (spectacularly sung by Sasha Cooke, who showed the requisite stamina, scarcely being off-stage, except to change costumes, for the nearly three-hour performance) and the strangely sexy Mark Rutland (splendidly sung and acted by the Canadian bass-baritone, Daniel Okulitch), lusting for the frigid Marnie, a classy lady despite her upbringing in the “gutter”, and the nastiness of the anagnorisis, revealing who actually killed her newborn brother.

Muhly has written huge parts for the chorus, from kvetching clerks to the final Anglican chorale, and the ENO chorus was terrific, as was Martyn Brabbins’s orchestra, which seemed compact enough for all of them to fit on the stage during the final curtain call. There were outstanding performances by the randy, ballsy countertenor, James Laing, who is changed in this version to Mark’s brother, sharpening the rivalry, and by Lesley Garrett and Diana Montague, both best beloved of ENO audiences.

Arianne Phillips is responsible for some costumes that startlingly evoke the era – at least for those who, like me, were there. You can’t fail to appreciate Marnie’s “Balenciaga” in the “country club” scene. (Phillips has made one tiny mistake, putting Marnie, who has only just joined the hunt, into the hunting pink – ie red jacket – worn only by the Master of Foxhounds; but it does look good.) I particularly liked the conceit of dressing the excellent four “Shadow Marnies” in the same frock as her, but in different colours. I even appreciated the eleven male dancers, choreographed by Lynne Page, especially in the hunt scene, where they were metaphorical riders, hounds and fox.

This is director Michael Mayer’s London opera debut, and he’s made a bloody good fist of it. I noted that even when the singers and chorus were grouped in a formation perilously close to boring straight lines, they cast shadows that made the grouping fascinating to view. This was one of those rare stage events where the design (by 59 Productions, led brilliantly by Julian Crouch) and lighting (by Kevin Adams) are themselves almost characters in the drama.

Ignore my negative fellow critics – go to the Coliseum and catch the new Muhly. (He also wrote the score for the gripping Howard’s End, currently on the telly.) And buy the unusually well-done programme, with its superb essay by Paul Griffiths, and telling quotations from the Winston Graham novel. You’ll forget the Hitchcock, too.