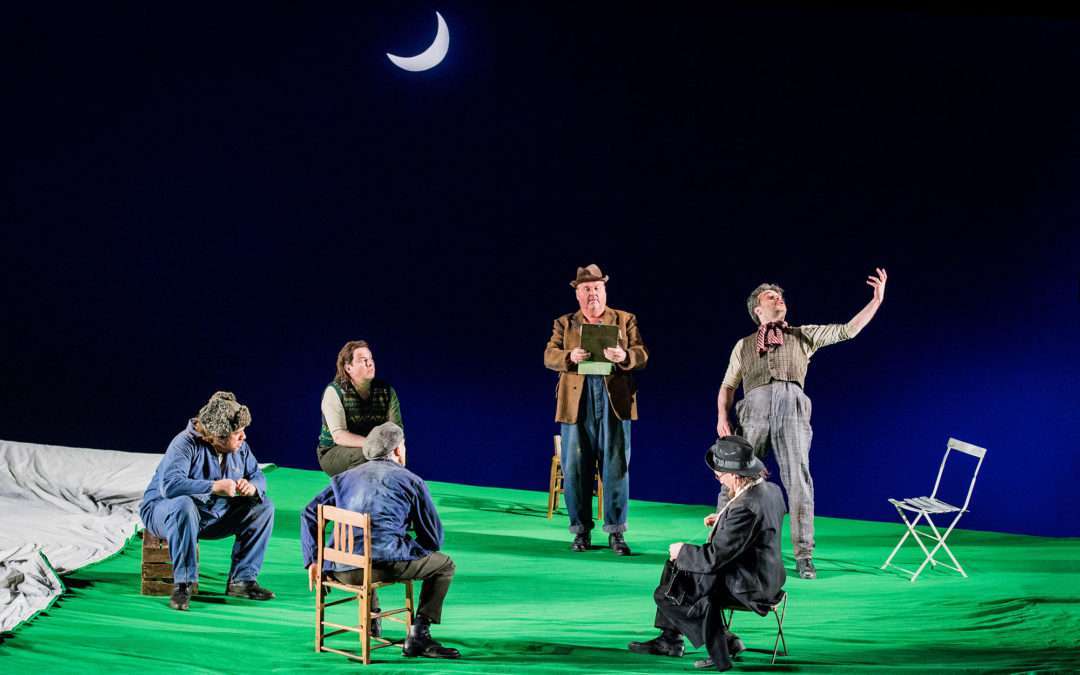 An enthusiastic audience was happy to welcome back the Robert Carsen account of Britten’s Midsummer Night’s Dream, first heard at the Coliseum over twenty years ago. Its signature look was and is making up the entire stage as a large double bed for Acts 1 and 2, remaking it as a dormitory of single beds for the opening of Act 3, then sending the beds into the flies to leave an empty white stage for the final scene.

The white sheets and green bedspreads establish the colour code, by which the fairies are in green, the Athenian lovers are in white (changing to gold for the return to Athens), while the mechanicals are in variations on drab and dun. This generates the visual running joke of the lost lovers acquiring increasingly more green stains on their gradually more rumpled and torn clothes, like cricketers who’ve dived for too many difficult catches. The use of colour quietly brings out the underlying theme of innocence and experience, purity and sexuality.

None of this is an expression of wilful ‘director’s theatre’, as it matches up with Britten’s own intentions in the score where he uses the resources of the chamber orchestra to demarcate the three groups in the dramatis personae.

Another praiseworthy aspect of this visually striking production is the lighting plot (Carsen and Peter van Praet), where a series of unobtrusive but effective interventions are made including the slow opening and closing of an unseen door marking the arrival and departure of Oberon, and the warm glow of dawn.

As well as three groups of characters, there are three groups of singers. The elders are the mechanicals (Graeme Danby, Joshua Bloom, Simon Butteriss, Timothy Robinson, Robert Murray and Jonathan Lemalu). These are fully on top of the brief, with singing and movement all well rehearsed and entertaining. Also fitting the ‘experienced’ brief is Miltos Yerolemou. His Puck is a rural spirit who teases and misleads, a blend of Ariel and Caliban. In a music drama with a lot of high-register parts, he is a helpfully contrasting gruff speaking role. Yerolemou leaps and dives, and has a style of running which makes him look appropriately like a faun. He also acts as a pastoral MC, shepherding characters around, and in Act 3 guiding lovers to their different beds in a somnambulant farce.

Secondly, there were the young soloists, many of them ENO Harewood Artists. Soraya Mafi’s Tytania is sweetly sung throughout; it’s not really clear that she is a queen and a figure of magical power. Christopher Ainslie’s Oberon managed the royal and magical aspects better, but started a little underpowered; his voice warmed up as the evening went on.

Theseus (Andri Bjorn Robertsson) and Hippolita (Emma Carrington) only appear at the end, so have little time to build a relationship with the audience. Worse, most of their time on stage is dominated by Pyramus and Thisbe, a parody of Italian opera greatly enjoyed by the audience; indeed, I thought the people behind me might need medical attention they were laughing so hard. For this the mechanicals shed their brown costumes and kit up in white, parodying of the Athenian ruling class for whom the production is being staged and by whom they hope to be paid.

Thirdly, there were the fairies (Trinity Boys Choir). Their chorus come with harpsichord accompaniment creating a suitably other-worldly timbre. The solos are all fine, but feel a bit little and lost in the Coliseum’s unforgivingly large space. Perhaps their being brought further down stage might help.

The orchestra under Alexander Soddy’s baton emphasises the strangely sweet atmosphere of the piece, neglecting its darker potential. The Bartokian glissandi are playful rather than destabilising; the bass line rumbles rather than snarls; the percussion is a huge toy cupboard, not a non-western disruption of the orchestra. This decision matches the look of the production, which was largely playful. On balance, this is a relief, since a production which insisted that the Duchy of Athens was the New Sodom and the opera all about child abuse, kidnapping, adultery, bestiality, arranged marriages, tyranny and the like would equally have missed the point that while the opera is a dangerous mechanical toy, it is not a horror movie.