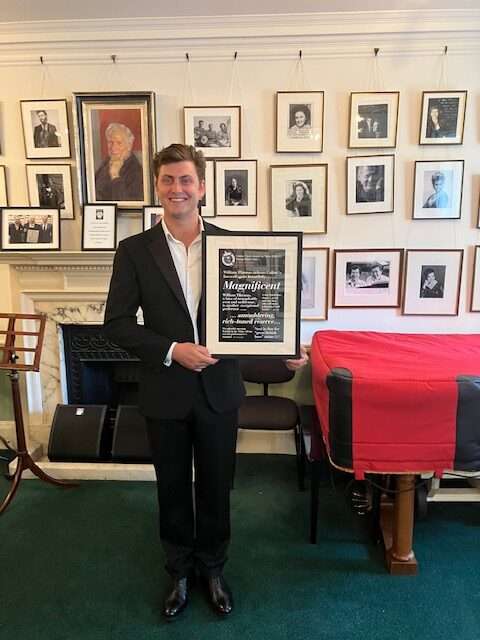 At the close of this afternoon’s recital – featuring songs by Brahms, Schubert, Mozart, Delius, Balakirev, Duparc and Strauss – at the Wigmore Hall, London, Rupert Christiansen presented this year’s Award for Young Talent (Voice) to the bass, William Thomas.

The citation for the Young Talent (Voice) Award reads:

In the few years since he first came to attention with competition successes followed by debuts with important companies and at major venues, the young British singer William Thomas has impressed not only with the exceptional quality of his bass voice, but also with his serious and developing artistry, demonstrated as an operatic performer on the stage and as a recitalist in the world of song on the concert platform.  His appearances during the 2020/21 season included The Magic Flute at Glyndebourne, Masetto in Don Giovanni for Seattle Opera, Jesus in a tour of Bach’s St John Passion under Sir John Eliot Gardiner, his BBC Proms debut in Mozart’s Requiem, and he sang Sciarrone in Tosca for ENO at the South Facing Festival at Crystal Palace. In 2021 he also joined the BBC Radio 3 New Generation Artists and appeared on Jess Gillam’s This Classical Life on Radio 3.