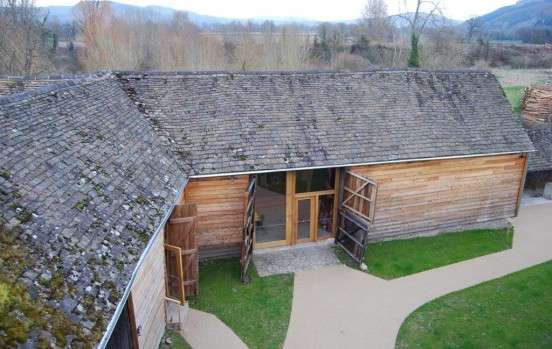 Sidney Nolan is known as Australia’s principal painter of the 20th century, famous for the “Ned Kelly” series and his fascination with Australian history and landscape. What is little known is that for more than half his life he was based in Britain, latterly living in a remote valley idyll straddling the Marches of Powys and Herefordshire – “All was static and monumental with the first of the dawn” is how he described waking up at The Rodd farmhouse.

Those 250 acres of farm and woodland that comprise The Rodd, the nearest town to which is Presteigne, is the centrepiece of this year’s celebrations of the centenary of Nolan’s birth, with his studio there – untouched since the day he died in 1992 – restored and opened to the public, and an exhibition of paintings many of which have never been shown before.

For after long drawn out negotiations the Sidney Nolan Trust set up by the artist in 1985 to look after The Rodd and his artistic legacy can now boast a collection through which to celebrate in style. “As we move into the centenary year, for first time we have a large collection of Nolans, about 3,800, that we own, and we have some very remarkable things that have not been seen in public before” says David Lipsey, the Labour peer who is chairman of the trust and lives near The Rodd.

Nolan fell in love with The Rodd, some of whose buildings date from the Middle Ages, and bought it in 1983, an inspiration for the later paintings, and he left it to the trust in his will. An enthusiast for natural produce he also ran it as an organic farm, now stull belonging to the trust but under separate management. Nolan was a very prolific as well as a versatile artist, but there was a disagreement between the trust and his widow, Mary Nolan, as to the ownership of the paintings. Agreement was not reached until 2015, a few months before Lady Nolan died in April of last year.

“Sid was very ambitious as to what he wanted the trust to do with The Rodd: a permanent exhibition of some of the best works; a place of recourse for international artists, summer schools and events; and he wanted it to be available for those from deprived communities in Birmingham (the nearest conurbation) who could come and learn something about the art and organic farming, he was particularly devoted to that,” says Lord Lipsey. “It was a very extensive remit, and for the most part the trust, though it has struggled at times, has comprehensively fulfilled it – apart from the exhibition.”

That, too, has been delivered this year, with a medieval barn restored thanks to the help of Arts Council England, and fit to house the collection. The studio opened on May 26, two more barns are being restored to provide new facilities and accommodation for visiting artists, and visitor facilities such as car parking, toilets and a café.

ACE has supported The Rodd’s arts programme through Grants for the Arts as it has developed over the last eight years, and in the year to last April had more than 33,000 visitors, plus 332 artists and 526 workshop participants, figures Lord Lipsey hopes the trust will increase substantially this year.

A music lover, Nolan was a close fiend of the composer Benjamin Britten and an admirer of the Britten Pears Foundation which not only founded the Aldburgh Festival but set up residency programmes and tutelage for young musicians based on Snape Maltings and their home, the Red House. It guided his thoughts for The Rodd, and Lord Lipsey, who is also chairman of Trinity Laban, has established a programme for bringing the conservatoire’s star pupils as well as other guest performers to the farm for concerts, fulfilling another of the artist’s wishes.

“Previous trustees have been extremely cautious about investing resources in developing the estate,” says Lipsey, who succeeded Sir John Tooley as chair in 2012. “It’s fair to say my view was that there is only going to be one centenary and we had to invest in it, including improving the estate, and I think we’ve also improved our relationships with ACE and trusts to enable us to raise money”. Later this year he will launch a public appeal for funds, the goal depending on the result of a current survey of the estate.

Born in Melbourne Sidney Nolan was one of a generation of gifted Australian artists, one group he was a member of being memorably called the Angry Penguins. In the 1940s he began his famous series of Ned Kelly pictures, and travelled extensively across the continent painting the dramatic landscape. He came to London in 1951 and although he travelled widely in Europe and beyond, studying in Paris for a while, Britain was his base for the rest of his life. In the 60s and 70s he made paintings inspired by the Britten operas he had found a passion for.

When he and Mary settled at The Rodd he said he felt he had come home, and it was there that he began the huge abstract spray paintings that were to characterise the last phases of his career. He was knighted in 1981 and awarded the Order of Merit in 1983, becoming a Royal Academician in the year of his death.

“The Rodd is a truly magical place,” Lord Lipsey says, “and Sid certainly had firm ideas of what he wanted the trust to do with it, but I don’t think what counts is having a wonderful ultimate vision of what you want to do, I think it’s to get on with the incremental steps as things develop.

“He is much less well known than he was in his lifetime, it’s a matter of fashion, and we hope that this year will bring many more people to know and love Nolan’s extraordinary work.”