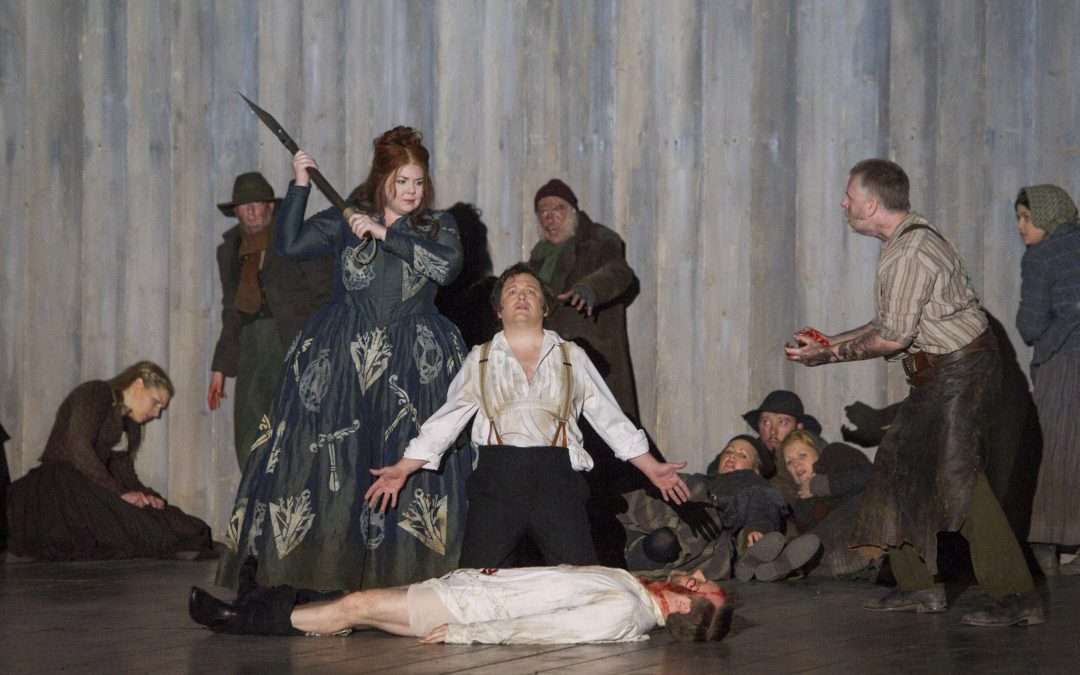 Those keen to update Bellini’s druidic tragedy can take their pick from colonial history – so how Christopher Alden lit on 19th-century America is anyone’s guess. These Gauls and Romans play out their oppression and rebellion in a big wooden barn somewhere in the Midwest. The nasty secret lurking in this woodshed is a phallic tree trunk covered in mystic symbols. Dominating the space, occasionally rearing up or twisting round on its rope pulleys, it’s an awkward dramatic anchor for a drama trapped for the entire evening in this single space.

Taking this outdoorsy story full of sacred forests, plants and herbs, and shutting it up it so aggressively between four windowless walls makes a strong statement; unfortunately Alden isn’t sharing that statement with his audience. Characters are confined, running at the walls, caressing them and crawling along the floor, but this is such a perennial tic of Alden’s that it’s not safe to place much interpretative weight on it. Maybe it’s Alden’s take on the Industrial Revolution – nature and its superstitions now rootless and helpless in the rational urban landscape.

His characters are stymied by direction that makes them sing while leaping awkwardly on chairs (or hurling them aside), straddling the giant tree or perching on a kitchen-chair throne on top of it, as Marjorie Owens does to deliver ‘Casta diva’ (‘Virgin goddess’ as it becomes in George Hall’s efficient translation). The results are predictably unwieldy, with ENO’s chorus coming off worst from direction that leaves them stranded without meaning or motive.

But then there’s the singing. Owens is a major casting coup; following Tamara Wilson’s blistering British debut in La forza del destino last year at ENO here’s another very fine artist new to the UK. Beautifully even and with a weight that promises even heavier roles to come, Owens’ voice comes through this marathon evening of music with no sign of tiring. There’s some irritating vowel modification and blurred coloratura early on, but her ‘Casta diva’ is majestic, and Owens comes into her own in duets with the evening’s other star, mezzo Jennifer Holloway. The two voices are matched for warmth and balance, and Holloway manages to find some humanity amid the abstract conceptualising.

American conductor Stephen Lord is an odd import, showing little affinity for the ebb and flow of Bellini’s tempos, and making slapstick of the opening Sinfonia. Even the exquisite introductory music for Act 2 doesn’t glow as it should. But everything holds together, and with the singers dominating the evening so completely we don’t miss the extra layers of orchestral colour too much.