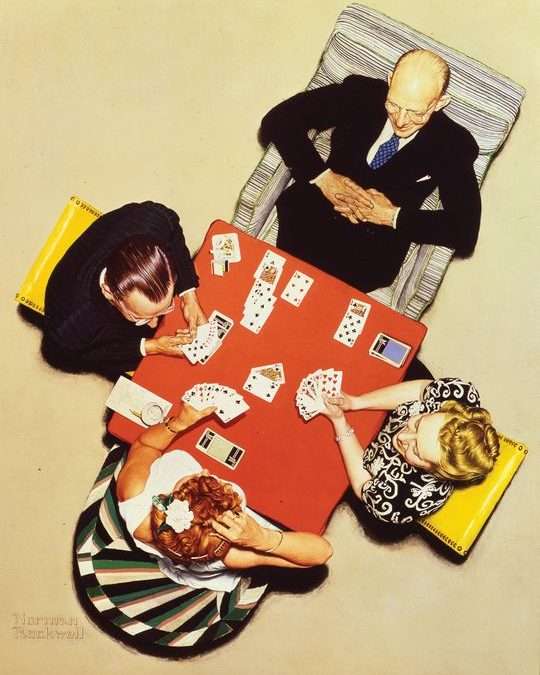 As a British art critic, before you criticize Norman Rockwell’s exhibition ‘Norman Rockwell’s America… in Dulwich’, make sure it’s not just out of ignorance of his intentions, or simply misunderstanding him. As Norman Rockwell (1894 -1978) was pitching his stall to the neighbourly, welcoming folk, pioneering in spirit typical of Grant Wood’s ‘American Gothic’, it is this American realism ( that of the visual jokes and quirky insights considered eccentric from British cousins across the pond) that is marvellous; America’s Exceptionalism.

I say, don’t take too much notice of some of the other art critic’s reviews about ‘Norman Rockwell’s America’ exhibition – for you may not go and see it. Damning, they miss the point. “Too nostalgic. Too sentimental. Too overly-affectionate. Too unsophisticated. Too kitsch. Too innocent. Too One-dimensional. Too patriotic. Too Rockwellian (used as an insulting non-complementary metaphor).”

For he was not of the Realist vein, being, instead, the official feel-good factor of America, for the wit and slush of wholesome American virtues to which Americans are earnestly devoted. As apple-pie and baseball as you can get, this is the American Dream; the best of twentieth century America -old-fashioned patriotism; the most American of all Americana. His illustrations are nostalgic, yes. Perhaps perceptive, even prophetic, in the way that some Americans (Democrat or Republican) sense a loss that they feel about their country today, making him back in fashion. As a portrait of America, Rockwell’s is the most American of all American art, his intentions being, to, “Show the America I knew and observed to others who might not have noticed. Telling the whole story with a single image.” Capturing everyday American life, with humour and insight, Rockwell was speaking directly to Middle America. From images of a family dressed-in-their-Sunday-best riding in their new vehicle; to congenial old folk; cute little girls all pigtails and apron; a grandfather teaching his grandson, the freckle-faced boy, who has grown up into the handsome clean-cut young GI just home from the war; loving couples smooching…Not all sentimental or sweet, it’s Rockwellesque.

‘The Four Freedoms’ is one of his most famous series of paintings from 1943, that harmonised with the speech made by President Franklin Roosevelt during World War II, when he said that Americans held rights to Four Freedoms on which to stand firm in their defence; that of Freedom of Speech, Freedom of Worship, Freedom from Fear and Freedom from Want. In which Rockwell depicts a typical American family around the dinner table, leaning forward on their elbows momentarily forgetting their manners, ravenous, in admiration of the large scrumptious roasted crispy-skinned brown turkey, taken to the table by cheerful Grandmother. A typical scene enjoyed by all American families annually, on the third Thursday in November – Thanksgiving Day. Which is what Europeans just don’t get. Such was its symbolism in unifying American culture, that during the war effort the Four Freedoms toured the country, raising over a million dollars in sales of war bonds.

By making his America one of special – almost-perfect ideals – Rockwell became the most celebrated illustrator for covers of The Saturday Evening Post. Not a typical current affairs magazine featuring the latest news and politics but essentially a showcase for short stories, it proved perfect for a Rockwell wrap. A timeline from the late Thirties onwards, he created 323 covers for the Post – which became the national’s most popular magazine. The covers provide us with a comprehensive look at his career. So popular, the magazine circulation increased to millions of households whenever one of his covers appeared – his artwork was so well recognised and received by Americans. A favourite, The Post’s cover of 20 September 1958, depicts ‘The Runaway’ boy, sat on a high stool in a diner, sharing a soda with a policeman. The attentive, kind, generously proportioned police officer in uniform is sympathetic to the young, thin, small boy with his run-away bag on the floor beside him. The police officer, a compassionate member of society, away from his usual hard-crime role of duty gains the kid’s trust before safely escorting him back home. The soda jerker looks on. The background is simply American too; the radio and a blackboard menu – two icons of American life.

His illustrations were executed with considerable technical skill, in oils on canvas. Such was the usual practice for American illustrators. Yes, and so what that his art both uses, and is based on, photography? That it is of commercial value that doesn’t quite stretch the intellect. Precise and detailed, illustrative rather than great painting.

As America’s best known, best-loved, illustrator for over six decades, Rockwell echoed the qualities of the American lifestyle, saying, “If it [America] isn’t an ideal world, it should be. So I painted only the ideal aspects of it. Pictures in which there are no drunks or self-centred mothers. Only foxy grandpas who played baseball with the kids and boys who fished from logs and got up circuses in the backyard.” It is by this standard that they should be judged. America’s greatest storyteller, Rockwell’s skill lies in his capacity to define and inspire American truths as being somewhat greater than reality. Unique and brilliant, Rockwell makes up ‘brand America’, making Americans proud. We should learn a lesson here.As ‘The New Yorker’ art critic, Peter Schjeldahl said in 1999, “Rockwell is terrific. It’s become too tedious to pretend he isn’t.”