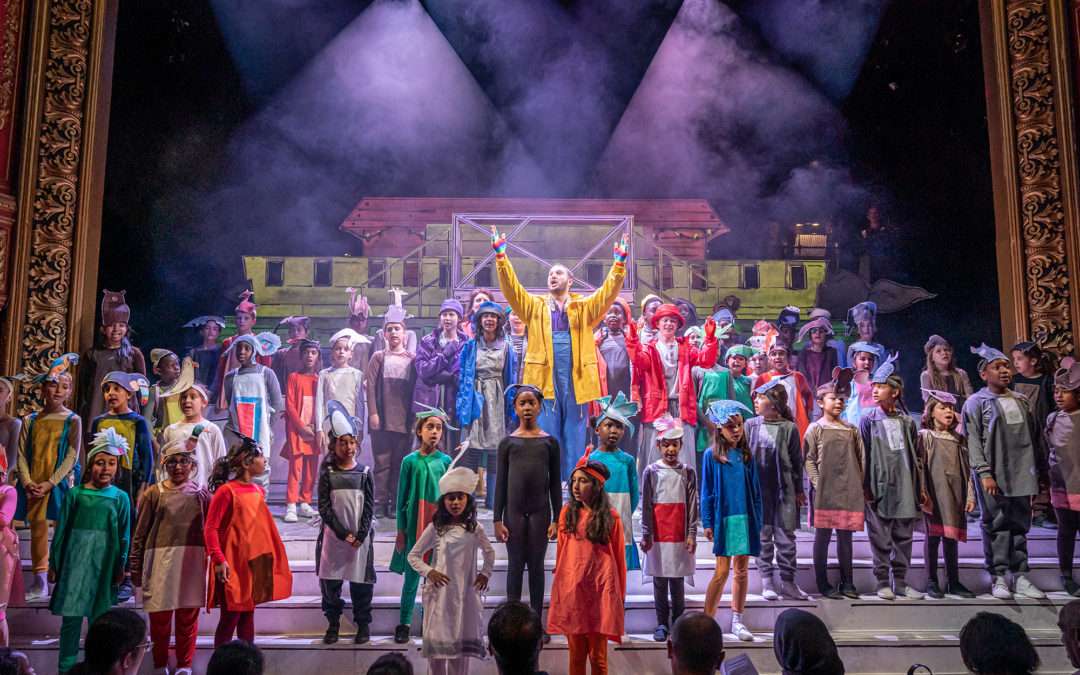 Benjamin Britten’s 1958 account of the flood described in Genesis draws on the mediaeval mystery plays, in which obedience is a key theme. While other human beings are busy being wicked, Noah is obedient to God’s command and starts building the ship without troubling the Lord with those ‘what’s an ark, what’s a cubit’ questions. Lindsay Turner’s production for this collaboration between the English National Opera and the Theatre Royal Stratford East casts Suzanne Bertish as God, a speaking role in which she is excellent. The comic turn comes from the disobedience of Mrs Noah, who’s having none of it and refuses to embark even when the rain starts.

Such a plot places the eponymous baritone (Marcus Farnsworth) at risk of seeming drearily good, leaving his spouse Louise Callinan having all the fun. Fortunately, Farnsworth handles the role well, Noah being a decent chap somewhat overwhelmed by the demands placed on him, not least the arriving crowds of animals. These are played by children from Brampton Primary School (on other nights, Churchfields Junior School) in headwear that identifies the species. They troop on and off bringing colour and fun to the show. Here is a tale which takes the theatrical warnings against working with children and animals to a new level.

Young voices are also entrusted with the roles of Noah’s three sons and their (entirely unbiblical but thoroughly medieval) wives: Thomas Baars, Gaius Bartlett, David Lahai-Musa, Zion Nelson-Bent, Jean-Luc Antonio, John Warner, Amy Chau, Freya Stewart-Williams, Hana Abdelatti, Njemile El-Shwarby, Alexandra Dumitrache, Adithi Sujith – depending on the night and cast. These roles were played and sung well, though dynamics were a problem. It’s hard to know how much this is to do with voice-training and how much the acoustic. Certainly, the orchestra, conducted by Martin Fitzpatrick, was under-powered. It’s not a large band in the first place; was placing it in a balcony over the stage, halfway up into the flies, a sensible move? It meant not all the sound reached the audience, and its balance of adults to children only became clear during the curtain calls.

A further problem is vocal timbre. Britten’s musical life was spent in a country where every cathedral and parish church, and numerous schools, had a choir which sang mainstream liturgical and para-liturgical repertoire with a sound broadly out of the bel canto tradition. He was thus confident, in creating several works in which professionals and amateurs collaborate, that all concerned were broadly on the same musical page. Several changes have come to that world. This production, drawing on schools and music services local to the theatre, has children’s choruses with a harder, less-rounded singing style. There is thus an inevitable mismatch with the trained soloists and the orchestra.

These are things musicians and community outreach officers think about. The children themselves were unlikely to have been losing any sleep over it. The audience, packed out with family members, was also untroubled. It joined in hymns with a confidence and enthusiasm you might expect less in an English theatre than a Welsh rugby stadium.

This opera ought to charm, and the ballets (choreographed by Wayne McGregor) of the dove (Francesca Ruby Vella, Ella Warren-Green) and the raven (Alyssia Baptiste, Neve Woodham) were indeed charming. Among the many other delightful animals, a special shout-out for the late-arriving, late-departing tortoise.

The ark itself (designer Soutra Gimour) was lovely, something between a children’s pop-up book and IKEA instructions. There were some very nice rain effects. The lighting design which gradually coloured it in at the end (lighting designer Olive Fenwick, video designer Luke Halls) was also a winner.