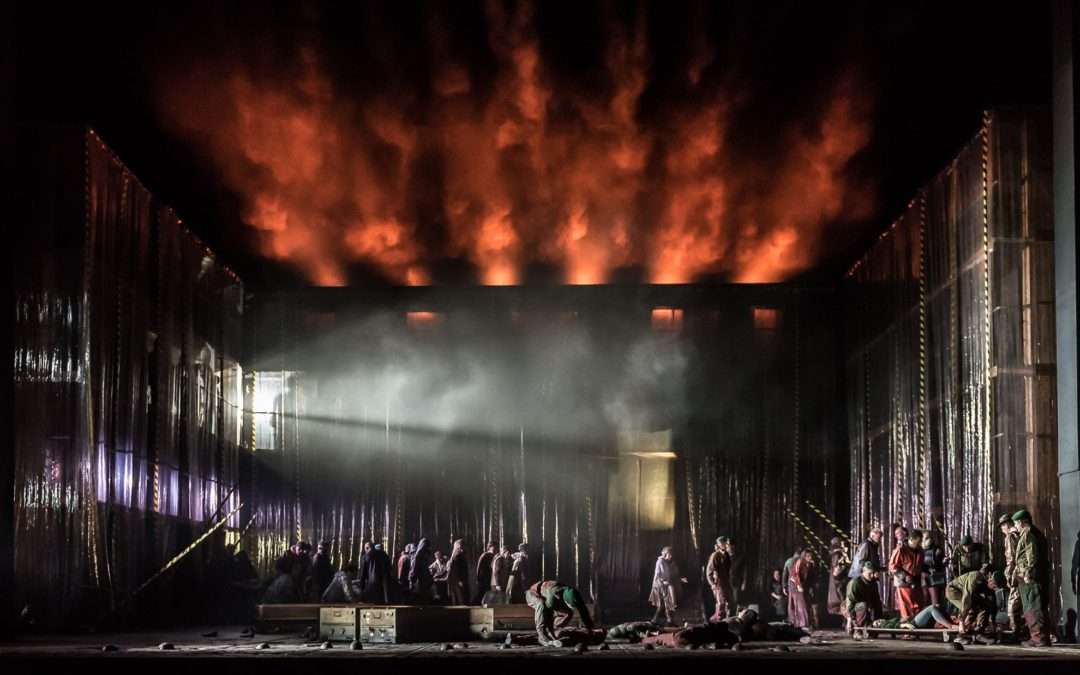 Basking in the sunshine of Enescu’s glorious score for Oedipe at the Royal Opera, I remembered the last time I became obsessed with the music of Romania’s foremost composer. Someone had given me a recording of his Octuor, performed by Gidon Kremer, and I fell in love with his extraordinary soundworld.

Two whole hours of this lush late-Romantic music, tinged with melancholy Romanian folk tunes, Debussyian key-shifts and Wagnerian grandeur, and I was in heaven. Best known for chamber works (especially the Romanian Rhapsodies that he was never allowed to forget) Enescu wrote just one opera, and it took him a large part of his composing career – he started it in 1910 but it wasn’t performed until 1936, at the Paris Opéra. Oedipe is still rarely performed outside Romania, and is seen here for the first time at the Royal Opera in a production from La Monnaie, Brussels. With a cast containing some of the top names in British opera – John Tomlinson as Tiresias, Sarah Connolly as Jocasta, Sophie Bevan as Antigone – the Royal Opera Chorus on lusty form, and an ebullient orchestra playing like soloists under Leo Hussain, this production makes an eloquent case for Oedipe to become a regular part of the repertoire.

Enescu’s librettist Edmond Fleg took Sophocles’s plays Oedipus the King and Oedipus at Colonnus and filled in the gaps to create a chronicle of Oedipus’s life from birth to death. It’s a fascinating psychological study of a man who believes he can beat nature and rewrite his fate. The title role demands stamina and style, and Danish baritone Johan Reuter is an exemplary Oedipe. He not only stayed the course (he hardly leaves the stage for the last three acts), he sang robustly and musically until his final walk into the blazing light of death. Canadian contralto Marie Nicole Lemieux has a short but fabulous scene as the Sphinx, rearing out of a crashed Stuka to spit her venom at Oedipe before dying to the strains of a musical saw. And John Tomlinson sings the blind Tiresias with the roar of a wounded beast, not unlike his brilliant Minotaur.

Director Alex Ollè is part of Catalan company La Fura dels Baus – known for creating theatrical spectaculars in huge venues – and with co-director Valentina Carrasca he created a suitably grandiose setting for a Greek tragedy. The stage is packed with bodies, both living and sculpted, to produce extraordinary tableaux. Ollè uses ecological metaphors to point out the futility of going against nature and fate, and the chaos that ensues. The terracotta-coloured mud that smears the Thebans’ bodies is apparently a reference to the toxic red sludge that gushed out after an accident at a Hungarian aluminium plant. Lighting designer Peter Van Praet contrasts sickly, smoke-filled shadows and harsh blinding light to conjure a hellish vision of society blighted by Oedipe’s actions.

This is a brilliantly filmic production of an underrated opera, with an enticing and original score that deserves to be known better. See it while you can!