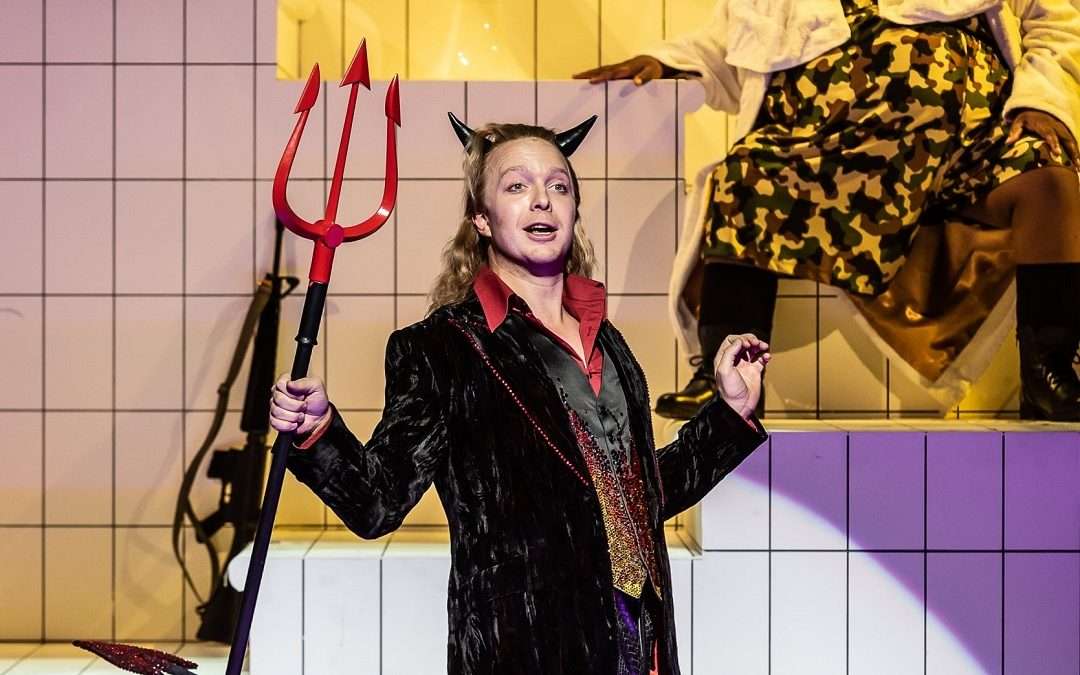 To hell with it

Daniel Kramer’s brief tenure as artistic director of English National Opera bore fruit of a sort in this season’s perhaps slightly smart-looking opening project of four works related to the Orphic myth. Orpheus who is supposed to have charmed animals and moved rocks with his singing and poetry (words as well as music) was the hero of Monteverdi’s L’Orfeo, one of the earliest operas, and the tragic love story seems perfect for this artform.

Philip Glass’s Orphée (opening at ENO on 15 November) is based on Jean Cocteau’s 1950 film, whereas Harrison Birtwistle’s 1986 Mask of Orpheus (opening at ENO on 18 October) is an extended exploration of the initial narrative about the poet leading into Orphic cult stuff with its emphases on purification and resurrection.

Kramer’s choices of Wayne McGregor to direct Gluck’s Orpheus and Euridice and of Emma Rice to direct Offenbach’s satirical Orpheus in the Underworld were a gambler’s lame wheezes that lost out. McGregor has done operas about a pair of lovers before. But his style of intricate abstract choreography, however beautiful and engaging, lacks narrative coherence. Yes, Gluck’s opera requires dancing to tell bits of the story especially in the Elysian Fields. But McGregor banishes the opera chorus to the orchestra pit where the difference between its various roles – mourning for Euridice, or threatening Furies, or blessed Spirits – is invisible. Also ENO opted for Gluck’s Reform opera (originally conceived for a castrato as poet) in Berlioz’s wonderful reworking for contralto rather than the later French version with a tenor poet. So McGregor’s expressive choreography for chaps and girls jars with a line-up of just three female singers.

Things improved after the interval thanks to Sarah Tynan’s beautifully sung Euridice, and more natural-seeming choreography by McGregor. But Lizzie Clachan’s sets are so vague and Louise Gray’s costumes so nondescript that the action leading up to Orpheus looking back and thus breaking the deal, and Love sorting out a happy ending (as the Enlightenment required) was pallid. Harry Bicket conducting was thoughtful and effective. Soraya Mafi sounded lovely as Love. Alice Coote as Orpheus was unwell and made little impression.

Major problems with Emma Rice’s Offenbach could have been predicted. She was briefly the director of Shakespeare’s Globe who confessed she did not know many Shakespeare plays and found the ones she had looked at hard to grasp. A natural for this job then! Having little sense of humour, she rewrote the storyline with Tom Morris looking after new lyrics.

Received in gloomy silence until near the end, was this the worst ENO production there has ever been at the Coliseum? ENO’s audience (including critics who have been shorn of their second seat by the current CEO) do not want to kill this great British institution. Some of us even try to be encouraging. Thirty years ago the brilliant cartoonist Gerald Scarfe did the designs for a Pountney production, which was also no joke. Comedy and operetta are a particular challenge now – mainly because ENO has no permanent ensemble and performers there are not used to playing off each other.

The story of Gluck’s opera is infatuation to die for. But Offenbach shows Orpheus’s relationship with Euridice as a suburban marriage on the rocks. The gods on Olympus (with morals of Deuxieme Empire politicians or courtiers) seek only extra sex. Emma Rice sought something more serious, so her Euridice has a miscarriage to give context, with baby buried during the overture.

With Rice in charge all the acting was badly directed, and the setting was equally unhelpful. Sian Edwards was the decent conductor, but not one to overcome such unfunny goings-on. Lucia Lucas gave us a well-etched Public Opinion as a cloth-capped cab-driver with a fine voice and rather posh accent. Mary Bevan’s Euridice (pronounced with an Italian ch at the end) supplied some vocal charm. Willard White as Jupiter seemed utterly lost. The cast mainly made an embarrassed impression. ENO’s Underworld was the absolute bottom.