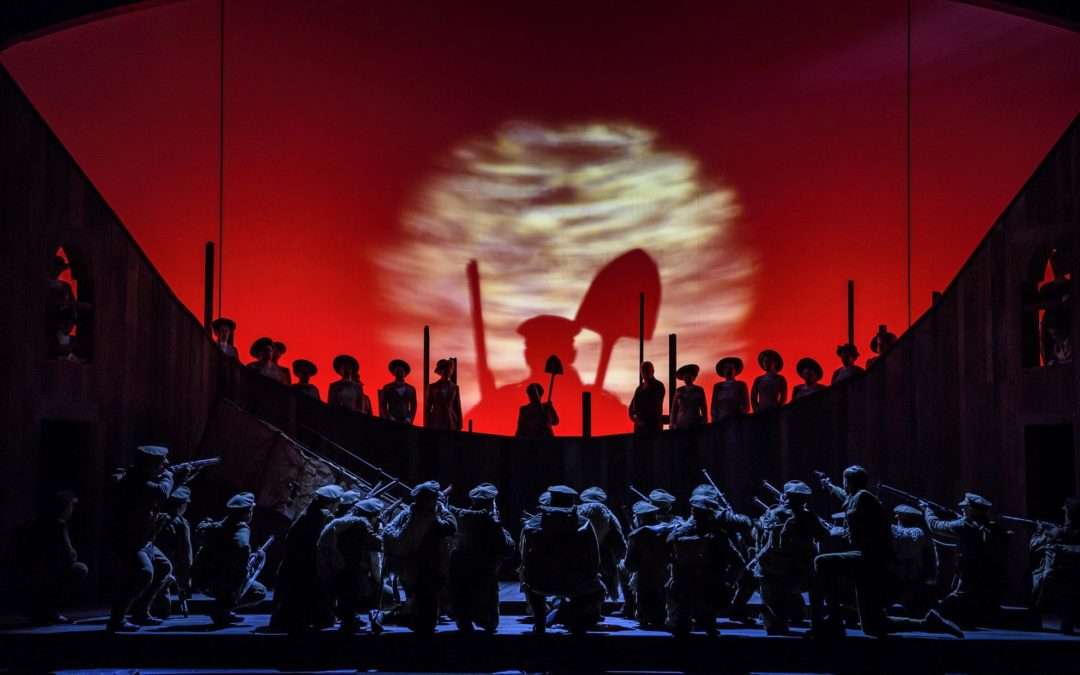 'Many visual successes' - In Parenthesis at WNO. (C) Bill Cooper

The first thing to say about In Parenthesis (both book and opera) is that it doesn’t major on narrative. Welsh volunteers to fight in the First World War gather in Britain, are shipped to France, march to Mametz Wood and are there killed. However, along the way poet David Jones set his experiences in the context of the doomed fight of the Britons against the invading English, Arthur’s knights seeking the grail, the end of time as described by the Book of Revelation, Henry V’s English and Welsh armies fighting in France, and more besides.

Iain Bell’s music, with a libretto by David Antrobus and Emma Jenkins, attempted to give us the story and the characters as well as Jones’s visionary layering of history and mythology.

The opera opens with a man and woman looking solemn in the company of wreaths, singing about “the many men so beautiful”. Was this a Remembrance Sunday framing device, to be followed by a flashback story? Unfortunately not: these were the bards of Britannia (Peter Colman-Wright) and Germania (Alexandra Deshorties), and they came back during the first half. I sympathise with the logic behind their invention (they certainly aren’t in the book), but I wasn’t convinced we needed them. They commented on events, but that’s part of what the chorus and orchestra are for. Without the programme no-one would have guessed who or what they were. Colman-Wright and Deshorties returned in the second half as a staff officer and the goddess of Mametz Wood, a far better idea.

The next problem was with characterisation. The stage was filled with men in khaki uniforms. Sergeant Snell (Mark Le Brocq), Lance Corporal Lewis (Marcus Farnsworth) had their stripes, but beyond that we had to concentrate hard to keep track of who was who. This undermined the emotional impact of their deaths in the second half. Andrew Bidlack sang the central role of Private John Ball; as the tale’s hero, he barely left the stage and deserved a campaign medal. George Humphries as Lieutenant Jenkins was drawn to our attention first by Germania as an example of male beauty and then by Private Ball, who sees him as Christ-like, shepherding his troops, at one point decked out in sheepskins.

The solution to the musical challenge of an all-male story was to script an all-female chorus. At first, I thought they were a suffragist demonstration, but they went on to be dryadic Welsh Valkyries, darting in and out of the action. In the second half, they swapped their hats and coats for tree costumes with twigs on their heads; it worked better than it sounds. Later they were returned to their coats with Ascot-style flowered hats. In one of the evening’s many visual successes (designer Robert Innes Hopkins and lighting designer Malcolm Rippeth), the hats turned into wreaths to lay on the fallen.

Despite the grim topic, the opera managed a certain amount of comedy. At the end of the first half, Dai Greatcoat (Donald Maxwell) and the Marne Sergeant (Graham Clarke) boasted competitively. Relaxing in a French café after the interval, the soldiers sang an arrangement of Sospan Fach (the opera is in English, but there are fragments of Welsh and Latin along the way). Musically the evening belonged in a tonally centred world not a million miles from Britten. Bell’s use of percussion and bass brass to paint conflict occasionally recalled the War Requiem. It was a good mix, and the cast and orchestra, under Carlo Rizzi, deserved the audience’s cheers.