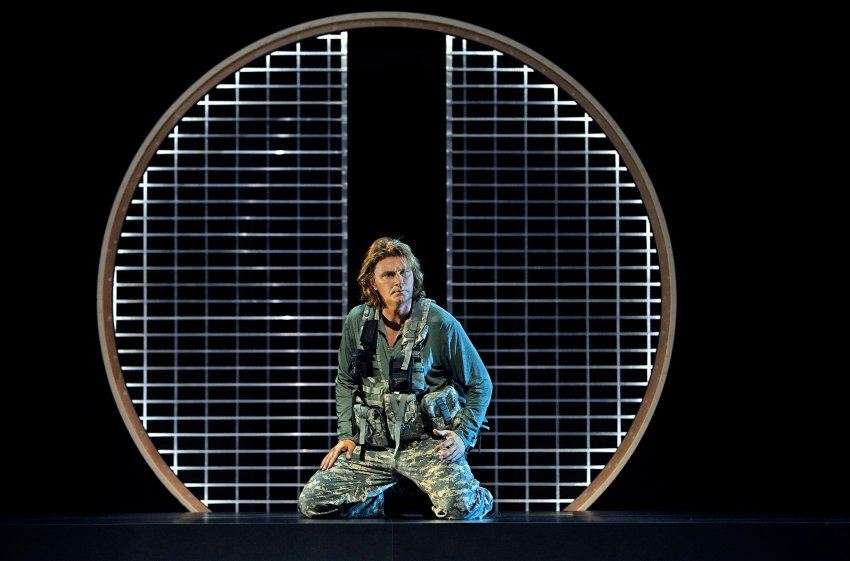 Twilight of the gods

To pull off an anti-religious interpretation of Parsifal would seem to be no mean feat. If you have ever wondered how Parsifal can move even atheists, this production by Uwe Eric Laufenberg offers some answers.

Setting it in the war-torn Middle East, with the flower-maidens swapping hijab for harem glamour and Parsifal arriving in army uniform, might seem to be looking for trouble. The staging is located precisely in Iraq – as a projected zoom from earth into outer space and back shows us during the Transformation music. The monks’ crumbling, domed church is troubled by the invaders; traditions are maintained with struggle and sorrow.

Unfortunately it’s full of small anomalies that leave the concept not entirely watertight. Goodness knows where Parsifal might find a swan in such an environment. And then the unfortunate Amfortas must give his own blood via his Christ-like wound and a crown of thorns: the Grail is filled with it and some of the monks drink, yet the rest of them fill their shot-glasses from a tap in the side of the bath,  on top of which their leader lies bleeding. From where I sat, I couldn’t work out how the blood would get into the tap, or how poor Amfortas could survive this lengthy drainage. It’s a painful, hideous ritual – but it’s meant to be, for Laufenberg’s purposes.

By Act 3 Kundry is ancient and infirm, water is in short supply and tropical nature has encroached on the ruined church; tourists cavort happily, some naked, under a waterfall (the sound of water annoyingly encroaches upon the Good Friday music); and it is only with the advent of peace and secular good sense that poor Kundry is finally accorded the dignity she deserves. She, Titurel and Wagner himself face death, washed away by the floods of time; and Titurel’s Totenfeier (funeral rites) becomes a gigantic confrontation as a Jewish group demands that the monks perform their ritual for the last time – a new slant indeed on these words. Now Parsifal brings salvation by placing the spear in Titurel’s coffin; everyone follows suit with every religious symbol available. Menorahs, Buddhas, crosses, everything is consigned to the coffin, and a greater humanity, unified and compassionate for the sake of it, is implicitly achieved.

Fabulous casting almost throughout: first, Georg Zeppenfeld, an outstanding Gurnemanz with strong-centred personality, velvet tone and meaning in every syllable. Elena Pankratova’s Kundry captured her metamorphoses not just in consistent vocal magnificence, but with acting so convincing that it was hard to believe the crone of Act 3 was the same singer as the earlier sequined seductress. Gerd Grochowski was a fine Klingsor vocally, though the production somewhat undercharacterises him – a self-flagellating Bond villain surrounded by both crucifixes and a prayer mat – and Ryan McKinny gave his all as a heartbreaking Amfortas, his ‘Erbarme’ a searing high point, the Totenfeier agonising yet full of dignity.

The Parsifal of Klaus Florian Vogt had been eagerly anticipated; the German tenor has a clarion trumpet of a voice, almost uncannily precise pitching, and a presence that could have been hand-made for Wagnerian heroes. Yet something isn’t quite ideal about his phrasing; the flow of communication seems occasionally held up and does not entirely reach the heart. What did strike home, though, was Bayreuth’s orchestra, finessed, elegant and impassioned under the baton of Hartmut Haenchen; and the chorus, rich and radiant, seductive and ferocious by turns.

Above all, though, the fervent message of this Parsifal was unmistakable: let’s bury the symbols, the superstitions, the rituals – odious and otherwise – of divisive religion, and the wars wrought in its name, and live together in peace, made wise by compassion. The audience is left bathed in light and the sublime conclusion of Wagner’s last score. Perhaps this Grail is the music. And the future is up to us.