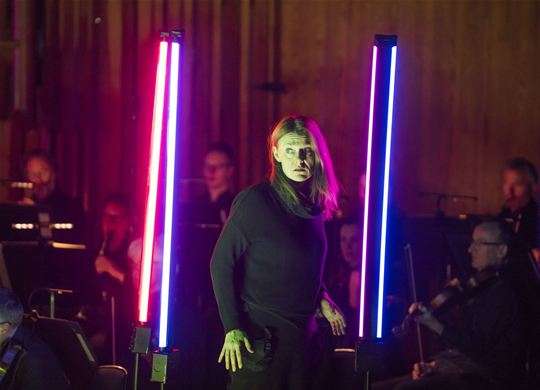 The Lord giveth, and the Lord taketh away. As Debussy’s magical score was sprung from the orchestra pit and played to a sort of heavenly perfection by the London Symphony Orchestra on the platform – giving every instrumental nuance the exact degree of delicate freightedness it wants – so an adolescent staging by Peter Sellars galumphed all over a drama which owes everything to the art of suggestion.

Some opera scores are wasted under the stage and long for the concert platform – maybe even Wagner’s Ring, as Opera North’s cycle, which tours in toto later this year, shows. But semi-staging, as it’s called, is a tricky art in which less is often more. Debussy’s music benefits hugely from being played in the open air, but the drama is as fragile as the music, and the director’s hands must be just as sensitive as the conductor’s.

And with a cast like this you could argue that Sellars was barely necessary. We sometimes forget that the dramatic power of opera comes mostly not from the staging but from the voice – because we so rarely hear more than flashes of it, these days. But this was a fabulous example, and I bet the CD (the opera was being recorded for the LSO Live label) will be up with the interpretations of Pierre Boulez, to whose memory conductor Simon Rattle dedicated the evening. Great singing creates character and drama and can render any staging pointless and vaguely embarrassing. That’s what happened here – partly because Sellars had nothing more to offer than everyone staggering around looking anguished.

Opera singers (the best ones) do it all so much better with the voice. Magdalena Kožená might not be everyone’s idea of a Mélisande: the voice is so luscious and rounded – while remaining a thing of real and gorgeous purity, with that unaffected edge of Slavic emotion – it could seem too robust for the frail heroine. What it did was to show Mélisande’s unsuspected spiritual strength in a way no staging could attempt. And there were moments of really breathtaking beauty, notably the modal folk song she sings at the start of Act III.

Christian Gerhaher sang Pelléas with real lieder-singer intensity, laserishly focused on the words, something of Fischer-Dieskau in the precision of his expression – and this is also a beautiful voice, as well as being a seismograph of the emotions. Even better was Gerald Finley’s damaged and tormented Golaud, perpetuating the abuse that is clearly an immemorial aspect of life in Allemonde. Elias Mädler, from the Tölz Boys’ Choir in Bavaria, sang Yniold with amazing assurance and very lovely tone.

In the end Pelléas is an experience of ineffable emotion transmuted into pure sound, a sort of Wagnerian ideal. It feels perverse that Maurice Maeterlinck’s play could exist without the music, so precisely and mysteriously does the orchestra commentate on text and subtext. Rattle feels how to manage the ebb and flow (and light and shade) of the score and controlled its pacing  beautifully, as well as coaxing those aching and shimmering harmonies into rapt life. The final act was a thing of great light and tenderness, as Mélisande faded gently away. Pelléas et Mélisande, first performed in 1902, is the sound of the 20th century being born, the discovery of new, unsuspected landscapes of sound and feeling whose legacy is still being played out – though whether in a way worthy of it is an open question. This was a very special performance, a happy reminder of where it all started.