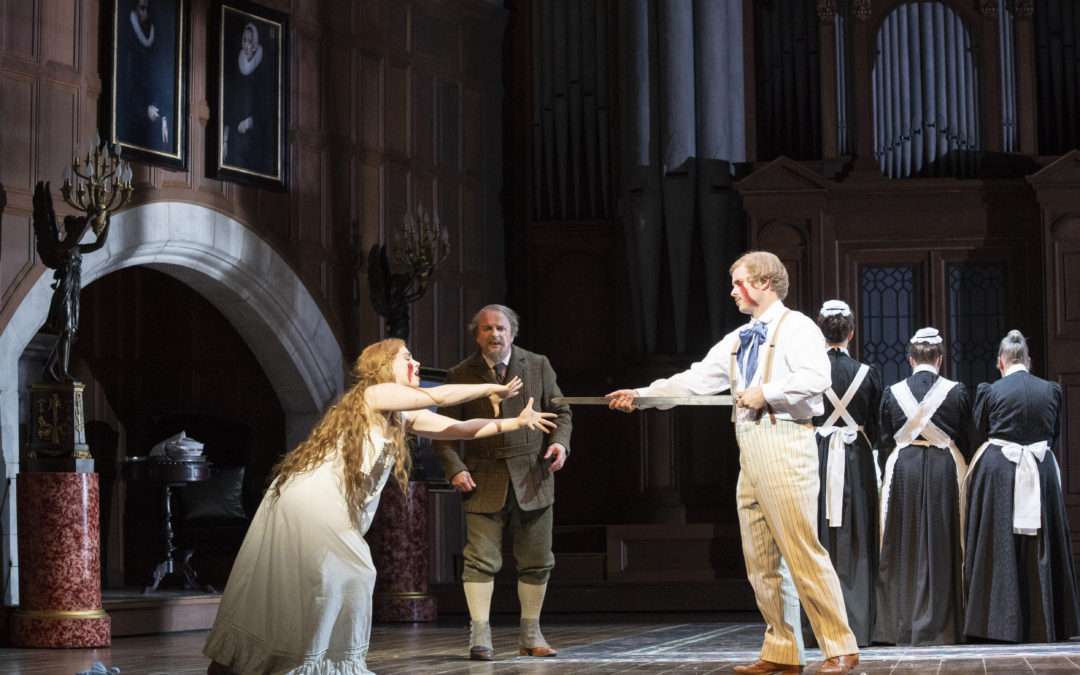 Self-referential production concepts have become tediously common at Glyndebourne over the years. The very high standing of Britain’s oldest and most distinguished opera festival no doubt makes it hard totally to avoid self-congratulation and pride. But the Norwegian director Stefan Herheim likes to set his productions precisely around where he is working: Handel’s Giulio Cesare in Oslo, and Dvorak’s Rusalka in Brussels. So it is no surprise for those who know Herheim’s taste and work to find that the dining-room in the palace of Debussy’s and Maeterlinck’s kingdom of Allemonde (where Pelléas et Mélisande here mostly takes place) is John Christie’s Glyndebourne organ room.

Since Jonathan Cross’s programme article opens with the words “a dark forest lit by dappled evening light”, Herheim’s approach is a challenge to narrative coherence. It’s true there’s a lot not spelt out in Debussy’s opera – which gets as painfully close to doubting that any truth can be trusted as any opera does. One consequence of Herheim’s casual conversion of John Christie’s disconnected organ pipes into evocation of a castle is to alter our sense of where Mélisande originates – because in a more attentively narrative production she never loses the waifdom of having been picked up by Golaud in a mysterious forest, nowhere.

Herheim makes her effectively into two different people: initially a moaning, distressed, lost innocent, but mostly a flirtatious, sexy, happy girl obviously destined to get engaged to Golaud’s younger brother. Frankly, it is hard enough coping with just one Mélisande. Herheim strives to preserve a sense that any infidelity is in Golaud’s mind. As Golaud goes barmy, probably plenty more literal-minded Glyndebourne attenders will too: I heard one elderly gent telling his lady it was the worst thing he had ever seen there.

Actually I think Herheim’s way of staging what’s all in the mind has become rather lazy. The different scenes in Debussy’s opera are also different dynamic worlds with different truths to be uncovered – and none of them suggests Golaud’s manipulation of young Yniold (a fairly tiny French soprano, Chloe Briot, who never for one moment seems male) is a child-abuse outrage. We are shown Jesus carrying a lamb over his shoulders in a window in the middle of the Glyndebourne organ, but no sheep heading for home, and the three sleepers seem to be very much awake, playing with artists’ easels… Comments in the libretto seldom bother to coincide with any location or element physically in the production – though much is made of Golaud’s sword. But we are stuck in an organ room with a tomb (or bath or small pond or table or mortuary shelf) in the middle of the clever carpet, in the middle of the wooden boards of the stage floor – itself somewhat tricksier than the rest of the mobile, massive set. All is done for neat effect and packs little meaningful punch in an opera that is really about human relations and what individuals can believe about each other. The exquisite musical atmosphere struggles to conform with the upstairs-downstairs organ room scenario, replete with the mystified or perhaps horrified servants that Herheim requires – it’s just too clever by half.

The cast is also (thanks to Herheim’s revised priorities) somewhat uncomfortable in role. Christopher Purves ought to be an ideal Golaud, but as directed by Herheim it is hard to feel much sympathy for him. John Chest’s Pelléas only really wakes up in the fatal late stages: earlier he and Christina Gansch’s mellifluous Mélisande are steadily unserious, and it is unclear how to take them. Unfortunately Herheim’s Arkel, a more significant and potent figure than usual, had to be nobly sung by understudy Richard Wiegold from the side of the auditorium while the indisposed Brindley Sherratt went through the motions of acting. Karen Cargill’s Geneviève was solid, overbearing and not very enlightening. I missed many emotions and tensions that make this work infectious and moving – though Herheim has devised in his scenario many crafty substitutes for touches we may expect, but fail, to find.

With such a wilfully misrepresentative production, can one expect conductor Robin Ticciati to mould his self-consciously polished hyper-sensitive treatment of the orchestral score to convincing dramatic purpose? That would be a tall order, because Ticciati is anyway one of those opera conductors who does his own musical thing regardless of dramatic purpose – effectively the opposite of Vladimir Jurowski. As opera, Debussy’s music for Pelléas et Mélisande is not at all “about” exquisite atmospheric beauties; it is about horror and the pain of human misunderstanding. Just watching Ticciati waving his hands around expressively and delicately it is very hard to believe he has the slightest sense of the terrors within this work. This is one of the greatest and most disturbing operas ever written about human failure and inadequacy and helplessness. The LPO plays wonderfully; but the music adds up almost as inadequately as the production. What a shame.