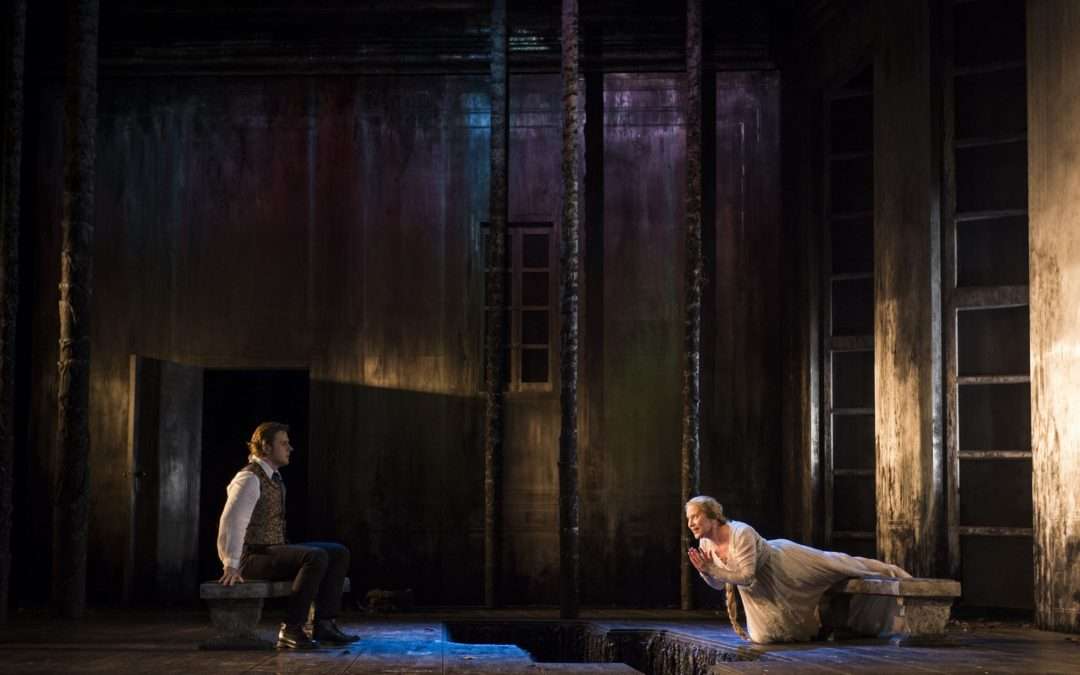 Radical ambivalence is fundamental to Debussy’s opera Pelléas et Mélisande. Can we know what we really feel inside ourselves, let alone what we feel about those with whom we are having to deal? Writing in the 1890s, during a fairly civilised era, Debussy adapted Maeterlinck’s play about royals in ancient Allemonde. But with their polite considerate relationships these characters could as well be any late Victorian well-to-do family.

Sir David McVicar directs with immaculate and fertile precision the fascinating, increasingly desperate frustrations with which the text deals (on which he spares no effort). He launches the story unconventionally with Mélisande lying in what will obviously be her deathbed three hours later. There is a tiny pond beside the bed – and Golaud is coming through a lot of tree trunks for this initial abstracted encounter with his wife-to-be. But McVicar’s original dynamic has everybody lost in their own worlds which often barely connect – and with Golaud and Pelléas collide dangerously, cruelly, fatally.

This is indeed what the wonderful, tortuously revolving and expanding music of Debussy’s work explores. McVicar’s staging is subtle and intently private. His strongly text-attentive direction of this tragically unresolvable family history comes over as acutely personal and masterly in its balance and refinement. Every character and each scrupulously detailed event has a compelling authenticity and clarity. Thrilling.

The settings by Rae Smith are beautiful but simple: woodland tree-trunks, mostly to the left of the stage, with shiny sweaty walls and windows and not many doors at the back and to the right, all atmospherically lit by Paule Constable. Scenes conclude and change through a black camera-obscura-style closure of the front cloth. Costumes are 1890s, John Singer Sargent. Meals abound, servants always attentive and careful. The odd chair for Arkel. Dignity. Taste. The timing of movement is a big part of the expressiveness (Leah Hausman in charge of that side of things). Conductor Stuart Stratford started a bit grimly slow, but settled to the task, orchestral playing sensitive and painfully expressive.

McVicar’s characterisations with a cast of somewhat variable quality are scrupulously detailed, highly effective, and profoundly moving and involving. Alastair Miles’s Arkel is yet another superb achievement, more actively engaged than usual. Anne Mason as the half-brothers’ mother Geneviève is striking and a richly defined presence. Cedric Amamoo as Golaud’s son Yniold sings with brilliantly exact intonation and fire, also acts superbly. Jonathan May’s Doctor is authoritative. McVicar’s care with every role and all the text is rewardingly vital.

But the French enunciation is not ideal. And Ukrainian Andrei Bondarenko is odd casting for Pelléas – a beautifully resonant baritone but rather too heavy, though he brings out a potent sense of young passion, especially in the climactic scene. Roland Wood is very impressive and convincing as Golaud, dominating the cast, text very audible, growing more and more powerful and desperate as agony grows and sympathy evaporates. Carolyn Sampson was rather too delicate as Mélisande, but also affecting, as beautifully dressed as her mother-in-law, though rather vaguer and more elusive even than usual in the work. Quibbles about casting apart, this McVicar staging is surely one of the finest productions Scottish Opera has offered in years. The company has had a hard time. But 55 years on from when it launched with this very piece in 1962, Scotland’s company now seems to be truly fighting fit.